The Case Of Cesc Fabregas

rwo power wrote:Well, that's why I haven't merged anything - I leave it to the people to review whether there is something useful for them ^^

Thanks rwo, amazing as ever

rwo power wrote:Well, I have a collection of Cesc threads here for further reading:

Or here the full result of the search: http://tinyurl.com/hxpwla2

Thank you. Hope at least some of these are related to his current situation and not problems from his past.

His problems date back to when he left Arsenal, he's been pretty shit since. It's not just a new predicament.

He was always shit.

He was legit at Arsenal because he had a team built around him such that it brought only the best out of him while the other 10 worked as a unit to cover his shortcomings. There is a reason why it was called the 'Cesc Role' and not simply CAM or AM or SS or something when he was with Arsenal. Wenger pretty much tailored the entire thing around him. That's why he flourished. He didn't have the same opportunity or position in any other team that he went to - he had to play to a system, instead of having a system built for him. He had to play alongside players much more important than him, instead of being the heart and soul of the entire unit. It was pretty obvious to a whole bunch of us that he will never replicate his Arsenal self after that. It is vindication, seeing his predicament since.

He is not that good, never was, he just peaked very early and everyone thought he was going to improve even further, didn't happen.

i don't think the 'system' subdued fabregas. in the right scenario he can pretty much be a system player and get overhyped as the next best thing. i'm not sure he ever played the position he'd have liked at barcelona. when you tell a player, who plays one position, to play another today, and another tomorrow, and another the next day, it hardly helps their development. unless such player is a utility player

this was a central midfielder, who because his position was occupied, was sometimes deployed as a false 9 or sometimes on the wing. and then on occasion deployed to play his regular position without any consistency; no surprise it didn't work

and i think he has never really enjoyed his football since he left barcelona. he was sold a dream, for two transfer seasons they courted him, and he had to tuck his tail inbetween his legs and leave, i think that really bothered him. it pretty much gave off the "you're not as good as you thought you were" vibe. i still think if he had got his shot he might have pulled it off....as a system player ofcourse, being carried by messi and able to hide his shortcomings

timing is everything; the wrong move at the wrong time, same goes for us and kaka. and now in a coaching revolving door at chelsea, hasn't really helped him. btw, i'm not sure building a team around him is key, i mean arsenal barely won anything with the team built around him, and he ran away from that responsibility by leaving them, to a side where he wasn't even third or fourth fiddle

There were many reasons why Arsenal didn't win squat - but the fact that we even came close in 2007/08, for example, was largely due to Cesc flourishing in a system built specially for him. Of course, he's always had his second-half-of-season-drop too.

What he had at Arsenal were an extremely rare set of circumstances going for him. I don't think he's had an iota of that after leaving.

Completely agree on this :

titosantill wrote:
he was sold a dream, for two transfer seasons they courted him, and he had to tuck his tail inbetween his legs and leave, i think that really bothered him. it pretty much gave off the "you're not as good as you thought you were" vibe.

Thanks for the replies. I can see now that there are several threads about him and I agree that his struggles had started some time back but I could not find any thread about his current situation at Chelsea where he is struggling to make the starting XI and whether or not he should have moved this summer. So I guess making this thread was worth it.

I'm really unsure as to why people even mentioned those other threads. They pertain to Cesc but are not necessarily entirely relevant to the topic of discussion--which warranted a new thread. "Hey we talked about Cesc being unhappy in a different thread, so idk why there is a thread about Cesc's career, his evolution as a player, and where he goes from here..." ---what? No. That makes no sense.

Anyway, as for Cesc right now, you just have to wonder whether he's worth having in your team. He's still a talented player but if we look at the teams he's been on when he hasn't had his 100% free role he enjoyed in post Thierry Arsenal, we see that he always had a Viera or a Gilberto Silva (Arsenal) or a Ramires/Matic next to him doing all of the hard running and the dirty work. The only place he didn't was Barcelona when he had to learn positional discipline because Busquets--brilliant a DM as he is--wasn't going to do a hard running role. What happened? His being in midfield was an abject failure. Being shoehorned into a role further forward he wasn't as bad, but it was never to be, Messi is much more effective there.

It's clear that Cesc doesn't have either the ability or the willpower to play positionally disciplined roles, nor does he put in the work required for a midfielder position *queue videos of Chelsea Cesc being lazy/out of position*. In a day and age where luxury players seem to be fading out of the game (how many Riquelme's are there in this day and age? Only the very best like Messi and Ronaldo seem to get away with being luxury players) you have to wonder if it's worth it anymore to have a player like Cesc in your team, especially at his age.

Conte has only played Cesc for 12 minutes so far this season in the opening three games and it's to be determined if he has a role in the squad.

CB, I largely agree completely. That's why I have been wondering if it makes sense for Fabregas to move to a team where he will get his kind of free role. Also if even one of Oscar, Matic or Kante were to suffer an injury he could be right back in the limelight at Chelsea. So let's wait and watch.

Is he good enough to warrant the free role anymore though?

I think Cesc's career is about to go the way of Sneijder, Van Persie etc. a role at a club like Fenerbache which is a very good team within their own league, but not really a challenger on the European level. Eventually he'll head to Qatar or the US and collect some money and then retire.

I'm actually not sure how much more we'll see of Cesc as part of elite teams (the top teams from the top leagues). 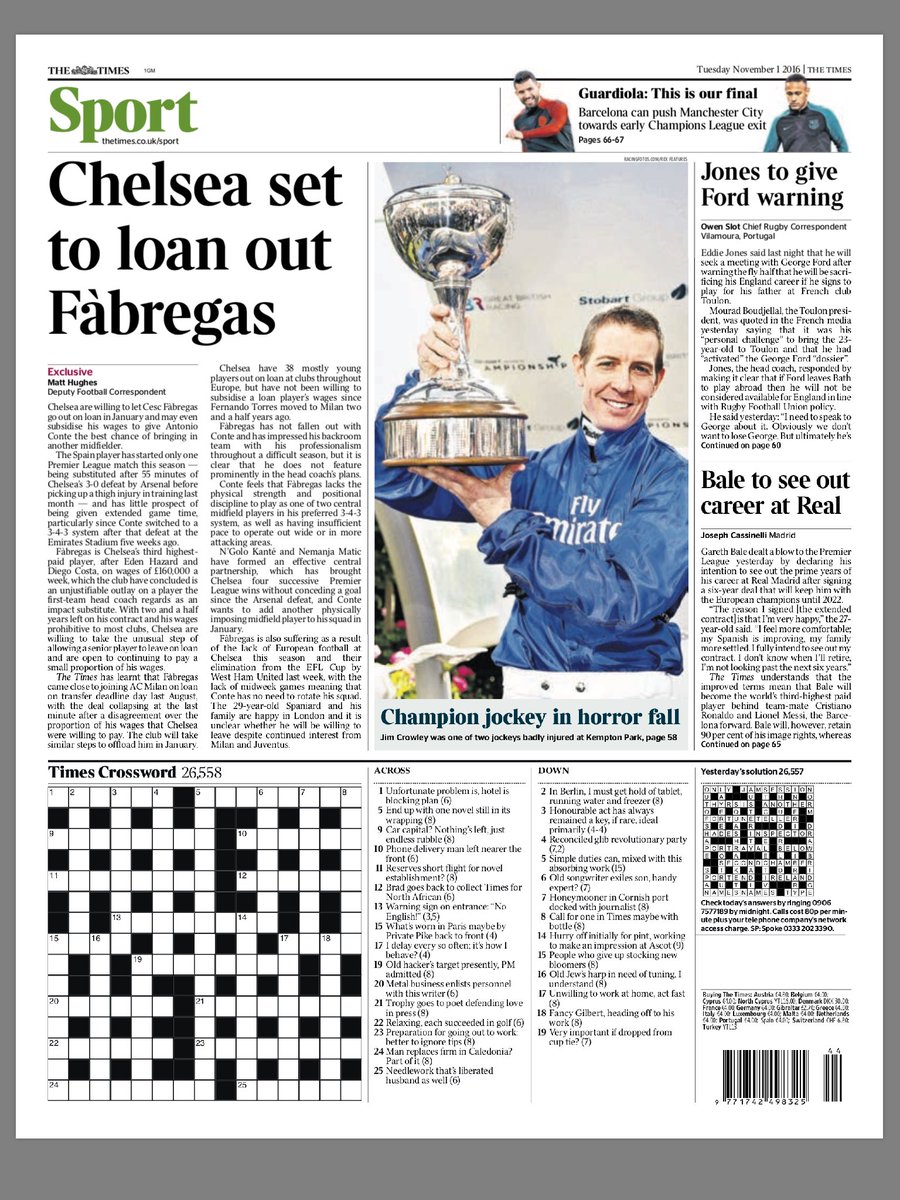 He's fallen so low, I can't even be bothered to make fun of his performances anymore.

He's injured, how has he fallen low?

I actually forgot he was at Chelsea

Fabregas captaining Chelsea on his last appearance for the club before movign to AS Monaco, in the FA cup 3rd round game vs Nottingham Forest.

What does he do? Miss a penalty after an interrupted run up.

Befitting end to a botched career.

Honestly had no clue he was still playing

honestly should have went to Serie A

honestly should have went to Serie A

Here’s Cesc Fabregas in Italy set to join Como on free move. Fabregas will be unveiled as new Como player today, while he signs contract until June 2024.

Not exactly what you had in mind

He had a very good spell at Chelsea, won a PL title and Chelsea fans will remember him very fondly and he was very happy there.

This is neither a financial nor a sporting move

I guess his wife wanted to live in Como.