can mods get open the chat for this pls

Motm that game ffs. Guy messaged me afterwards telling me I'm exactly what they're looking for.

only a matter of time until you revert to your favored CR7 gimmick IMO, deceiving those poor lads ffs

score an own goal mt pls

Think they're done for tonight.

@Onyx wrote:Motm that game ffs. Guy messaged me afterwards telling me I'm exactly what they're looking for.

Can this happen more often Mt?

No idea what happened to the gameplay. Suddenly feels heavy and unresponsive.

@Onyx wrote:No idea what happened to the gameplay. Suddenly feels heavy and unresponsive.

Happens to me sometimes, especially after a long winning streak. I wonder if this game is scripted or not in a certain way


Finished FUT Champions for the first time got some cash and some jumbo players pack, packed Auba and was expecting like 20-40K

I saw you playing it yesterday, so did you play last weekend?

it's proper cancer and boring wasting your weekends on it, I'm playing it for the first time in a month today, I got gold monthly for playing in November and got 3 utter shit players that soured me so I took a break, breezed the qualifying tournament a few days ago, played 12 games today and was getting spanked. think I'm 5 wins in 12 today. I usually finish with 23-25 wins, Legit finished there 7-8 times and only pulled two players worth more than 20K. Disgusting. But I have made like 800K total just by playing FUT champions, if you're decent at the game and play consistently you can buy anyone you want this year without spending money

think Higuain is crap on the game personally and Marchisio despite being my fav midfielder previous years is very average for his price, prefer Naingol

what team you rocking with? Dybala is ridiculous on the game ffs, legit has better stats than 88 rated Griezmann (who I used and found crap)

fitness team I rotate (only just put this together, had a German squad that was crap so I rage changed lol) Mad want Dybala, him and Chiellini and i'm done. Don't even need Buffon because Hart is OP

Higuain with either Sau, Eder or Giovinco beside him

Higuain has been beasting for me, in a partnership he's GOAT in a lone striker capacity all number 9s suck for me.

Only played like 20 games of champs last time but won i think 14, sweaty as *bleep* games man

Won like 4 out of 5 so far, I doubt i'll play 40 consistently ever unless I'm on a mad run because I don't got the time to sink in to fifa like that.

However I always moaned about UT because unless you have 99 luck you need to spend dollar every year to get a sick team. FUT Champions fixes that problem.

And yeah qualifying tournaments are piss easy, never lost a game in them yet.

genuinely just wanted 1 usable player that was it 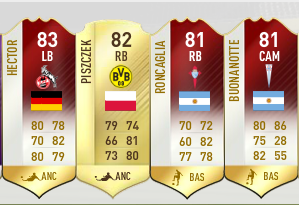 legit me after opening that pack

Love Insigne and Cuadrado, if either fit in a 4-1-2-1-2 narrow i'd CAM them and drop Pjanic deep.

I used Chiellini a lot and Bonucci is just as good IMO, Chiellini has pretty low stamina even though Bonucci only has a little more, Chiellini legit been my fav CB for the last 5 years on FIFA but this year I recommend Manolas, unreal with an anchor card on him, I know you're a Juve fan though. Buffon's not even that good IMO. Doesn't save much for me, think he has avoid crosses trait too which sucks. He isn't bad just def not worth the coin.

absolutely hate playing against Cuadrado, pos is a nightmare with that dribbling

Page 20 of 27
Permissions in this forum:
You cannot reply to topics in this forum
Latest topics
» Does Zidane have a problem with playing kids?

Today at 12:13 am by BarrileteCosmico

Today at 12:07 am by BarrileteCosmico

Today at 12:05 am by BarrileteCosmico

Yesterday at 3:30 pm by BarcaLearning