Don't really see us winning this one despite having a better team. Klopp has a great record in big matches so far and can see that continuing. We generally struggle against Klopp's teams and match being at anfield is even more difficult.

Looks like they will have sakho, Henderson and Ibe back. Was hoping Sakho wasn't fit enough but oh well.

If we play to our strength then we can obviously get something but i can see us falter under pressure lol. Hopefully Ozil can dominate.

need 3 points no matter how. Would take an offside deflection via linesman's ass for a cheeky 97th min winner.

If Ozil gets chased down then Arsenal are going to have trouble keeping ball and passing it in final third. Sanchez will be sorely missed for his forward attacking drives.

Santi will be missed more.

We have nobody who can keep the ball when being pressed aggressively.

Expect shitloads of turnover, although I back our defense to keep things somewhat tight - more so down to Liverpool's attack not being at its best. However, midfield mistakes will be costly.

Cech needs to be at his best for us to come away with 1 point - which would be like a win.

Liverpool are missing  Coutinho, Skyrtel, Henderson and Sturridge. Benteke only threat they have upfront and I believe they will be up for it. This wont be a easy game and knowing Arsenal we will make it even more difficult for us.

A tie wont be bad but we really should win. Liverpool are at home and need a win and Klopp will fire them up.

A point wouldn't feel like a win at all. This is a Liverpool team in patchy form with injuries to key players. It's a game we SHOULD be winning as title contenders.

As far as the pressing goes we need to ensure the wingers, probably Walcott and Campbell, aren't too detached from the midfield otherwise the midfield will have no where to go when the angles are closed down, as it was in the Spurs game.

They've been vulnerable to balls into the box and that's one area we can exploit with Giroud up front. They've got individual threats up top but as a unit they haven't been great so as long we're tight at the back we should be okay.

It's not an easy game but it's one I'm reasonably confident we can win.

GoonerJay29 wrote:A point wouldn't feel like a win at all.

By now Jay, you should be aware of how I feel (read: post on GL) before most Arsenal games these days.

Liverpool Football Club have completed the signing of Steven Caulker on loan from Queens Park Rangers until the end of the season.

The relevant paperwork has been completed in time to allow the centre-back to be eligible for selection for Wednesday evening’s Barclays Premier League fixture with Arsenal at Anfield.

Caulker, who has Premier League experience as well as being capped by England, showed a willingness to commit to the Reds at short notice.

The 24-year-old’s arrival eases the injury situation the club are currently facing in defence, which includes both short and long-term absentees. 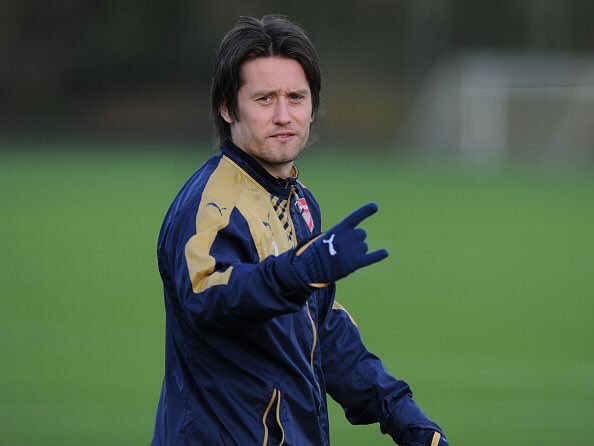 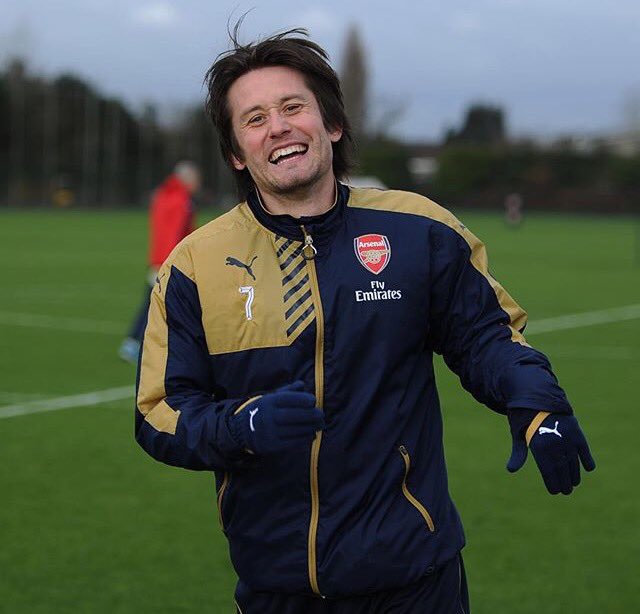 I can see this game being similar to the Southampton one with Liverpool getting in our faces and pressing high up the pitch. We need to be prepared for it this time, we have to be stronger defensively and keep the ball better or else it will be long night.

Think you guys will win it, or at least tie. Just can't see Liverpool scoring against you guys.

Head to head record: (League only)

Earlier this season the teams played out a goalless draw at the Emirates. It was the first 0-0 in 42 meetings between the two. James Milner captained Liverpool for the first time.

Last season's Anfield clash saw the teams draw 2-2. Philippe Coutinho and Mathieu Debuchy scored in the last 2 minutes before the interval. Olivier Giroud put the Gunners in front before Martin Skrtel's 97th minute equaliser. The Reds finished with 10 men after the dismissal of Fabio Borini.

In the Premier League Liverpool have won 16 of the meetings with Arsenal winning 15 and 16 draws.

At Anfield in the Premier League era Liverpool have recorded 10 victories, drawing 7 and losing 6, scoring 44 times and conceding 26.

If Liverpool win it will be their 50th home league win over tonight's opponents while a draw would be the 50th in all league meetings.

A Reds victory this evening will be their 1,200th at Anfield in top-flight league football.

Nine hat-tricks have been scored by Liverpool in league games against the Gunners with each of the last 4 and 8 in total coming at Anfield – the last from Peter Crouch in March 2007.

Liverpool have failed to score at home to Arsenal in only 2 of the last 21 league meetings.

The Reds biggest league win over Arsenal came in 1964 when they clinched the title with a 5-0 victory.

In league and cup, Liverpool have kept 3 clean sheets in the last 38 meetings home and away. In the league it is 2 in the last 20.

The Reds have won one of the last 8 home league games with Arsenal - the 5-1 hammering in February 2014.

Only twice before have both league meetings in a season failed to produce a goal. It previously happened in 1951-52 and 1998-99.

Nathaniel Clyne scored the winner in a 2-1 League Cup win over Arsenal for Southampton in 2014.

Daniel Sturridge made his league debut for Liverpool 3 years ago today and scored as a substitute in a 2-1 defeat at Manchester United.

Emre Can celebrated his 22nd birthday the day before this game.

Jordan Rossiter made his Premier League bow as a substitute at the Emirates last August.

He made his Gunners debut against Liverpool in the F.A. Community Shield in Cardiff in a 1-0 win.

The Reds will miss the goalscoring threat of Martin Skrtel who has netted 3 goals in the last 2 home games against the Gunners.

Liverpool have scored once in the first half of the last 7 league games since hitting 3 in the opening 32 minutes at Manchester City.

When Liverpool have scored first in a game this season they have won 11 and drawn 6 of 17 games. In the league that record is 7 wins and 4 draws in 11.

The Gunners have finished in the top 4 in each of the last 19 seasons. The last time they failed to achieve the feat was under Bruce Rioch in 1995-96.

Their last Premier League title came in 2003-04 and a year later was the last time they recorded a top 2 finish.

Arsenal's biggest win over Liverpool at Anfield came in November 1952 when they won 5-1. Cliff Holton scored a hat-trick.

The Londoners have kept one clean sheet in their last 19 visits to Anfield in league and cup.

Arsenal have scored 14 goals in their last 7 league visits.

The Gunners are competing in the Champions League for the 18th successive season and have never failed to reach the knockout stages since the start of the new format in 2003-04.

Arsene Wenger is the only manager in the top 4 divisions who was appointed to his current club prior to the Millennium.

Olivier Giroud's goal here last season was the Gunners' 100th in the league at Anfield. When finding the net at Swansea in October he scored the 2,000th Arsenal goal during the reign of Arsene Wenger.

Giroud scored in both meetings last season and has 3 goals against the Reds in 8 appearances.

In league and cup Giroud has scored 7 goals in his last 8 games.

The Frenchman has scored in 10 league games this season, netting a single goal in each.

After 20 games of this league campaign the Gunners have 42 points - 9 more than at the same stage of last season.

Arsenal have lost one of their last 10 games in all competitions.

Both Arsenal and, the Reds next opponents, Manchester United have won more league games at Anfield than any other visiting team (24).

Laurent Koscielny was sent off in this fixture on his debut on the opening day of the 2010-11 season.

Last month against Bournemouth Petr Cech broke David James' record of clean sheets in the Premier League. He recorded his 170th in 352 games overtaking James' previous best of 169 in 572.

Alexis Sanchez could make his 50th league appearance for the Gunners.

The Gunners have won 6 of their 10 away league games this season but have still to visit Liverpool, West Ham, Manchester United, Everton, Tottenham and Manchester City.

This is the third different occasion the Gunners have topped the table this term. The previous times the lead lasted 24 hours.

Scorers this season: (league in brackets)

We're a mess right now, just show some pity and stop scoring after your third, okthnxbye.

“He has the attributes to play in central midfield, he has that important quality - a little surge to get out of pressure,”
“That is why he could be suited for the modern game because he has that capacity to get out of the pressure

You know this is Arsenal right? we lost to Southampton who have not won a game since.

“He has the attributes to play in central midfield, he has that important quality - a little surge to get out of pressure,”
“That is why he could be suited for the modern game because he has that capacity to get out of the pressure

I agree with Wenger. Ox has the skills. He needs to work on retaining the ball and not being a turnover machine - something he's been doing a lot recently.

Ox and Jack are the perfect heirs for Santi and Rosicky in terms of skills and potential. If only they weren't bloody injured all the time. 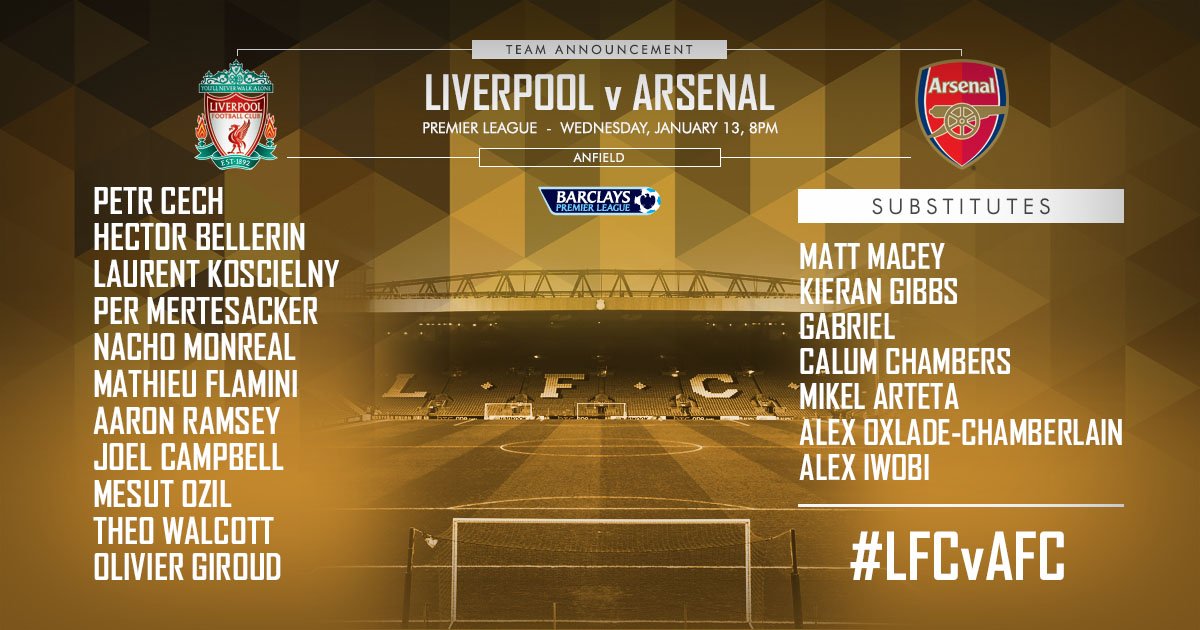 How did Liverpool assemble that starting 11 if so many of their players were injured?!

Can anyone tell me what Theo was trying to do there ?, dribble in front of goals when you have no close control whatsoever

Well our defense is dog shit right now, can't clear a damn ball to save their lives

Today at 11:33 pm by BarrileteCosmico

Today at 11:28 pm by BarrileteCosmico