Gabriel was good in the last episode. But won't lose sleep if he does. Morgan is needed in the show. He was proved to be right when the wolf jesus guy turned face later on.

how can you dislike eugene ffs

Didn't even know so many people watched this show. Literally everywhere at the office "did you watch TWD last night" "best episode ever"

@M99 wrote:Abraham clearly used Dead Eye from Red Dead Redemption to mark the targets in slow motion and then execute them all in a blur.

Lmao at dead eye from rdr, absolutely spot on

@BarrileteCosmico wrote:
Also it was shot in a very cartoony way, made me think it might be a premonition or something.

@RealGunner wrote:Gabriel was good in the last episode. But won't lose sleep if he does. Morgan is needed in the show. He was proved to be right when the wolf jesus guy turned face later on.

how can you dislike eugene ffs

Disagree about Morgan, he wasn't proved right as the whole mess with Denise it's because him.

I love this show but I don't understand the need to treat the viewers as imbeciles. You all have well voiced the problems, with Maggie wanting to die at the tower instead of just climbing onto the wall, Glenn wantoing to suicide himself, Carl's wound not being credible, etc.

Everyone I heard from and read from are unanimous in their dislike of this week's episode.

I thought it was alright. Obviously was a huge come-down from last week's ep, but that's expected.

Coral back fine and dandy after being shot in the eye, really wished that mofo had died. sigh.

That Jesus dude displaying teleportal skills, ending up top the uhaul van after being tied down on the ground

The tag chase scene between him and Darryl

And him getting K.O'd to a coma soon after

Interesting character in the making.

Rick and Michonne finally get it on. Hmm convenient how quickly he got over that blonde woman. I dunno what purpose it serves the writers to link these 2 characters romantically, they have no chemistry together and the whole thing seems pretty forced (gotta have another romance in the series to spice it up type of thing).

Overall, it was a decent episode.

the episode looks like they skipped ahead a month or two.

I think it's entirely possible Jesus tracked the truck the same way Rick and Daryl did. He just did it faster as he's slimmer than both with only himself to worry about. Rick didn't exactly gun it when he was driving also. I legit lol'd when he popped up in Rick's room at the end though. Great ending. Very different character than he was in the comics, but he appears to be pretty entertaining. Enjoyed his introduction.

Also regarding Deanna....my co-worker doesn't think she could've made it out of that room, firing on walkers, without being torn to bits, but then shows up in this episode relatively untouched, despite her walkerism. I personally think she turned just as they got to her and rather than tear her apart, they left her alone since she was either too far gone or had already turned enough for them to lose interest in her. It was likely they were drawn to her gunfire and not to her specifically. My co-worker disagrees of course, but I would be interested in opinions here.

Rest of the episode was meh.

Best episode of the season.

Although I agree I don't see the Rick - Michonne chemistry

Thought it was a great episode. A much needed calm after the last week's one.

Rich and Michonne was going to happen at some point considering how much of a mother she is to Carl and Judith. However i hope it doesnt develop into anything serious.

Finally made an appearance in the show. Great great character. He tracked that truck the same way he tried to out-combat Rick and Daryl. Guy is actually a genius. Good addition to the show and the actor looks decent as well so far.

Deanna bit was meh. Agreed with Mclewis about her.

Thought Carl was good in this ep.

Loved how light hearted it was at times. Nice change.

Yeah they fast forwarded a few months after the evens of last episode. I quite enjoyed it. Second half of the season has so far been way better than the first half.

And don't know how I feel about Rick's little shindig with Michonne. It just doesn't fit Michonne's character from everything we've learned about her.

Though, she's one of 3 main female characters left in the show along with Carol and Maggie. Carol is too old to be a romantic partner for Rick and Maggie is unavailable, so Michonne seemed like the only option. 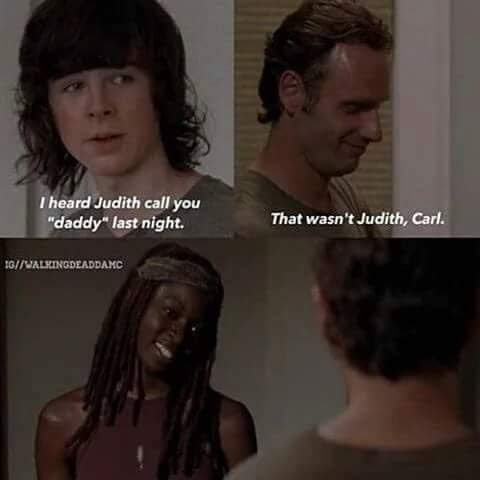 Slow episode, was to be expected, lots of "sup" moments that seemed out of place after one of the most intense ever. Deanna moment was very anticlimactic imo. Don't care much for her son but these kind of episodes present a platform for NPC characters to try and become something more.

Had a gut feeling since Michonne started befriending Carl that this family dynamic would form and she'd become Mama Grimes. Surprised they did it right after whats-her-name's death but I like the idea of it.

Jesus seems a cool character. That ending was hilarious

Ep 11 was a nothing episode. Same ol same ol entering a new community, meet new people, new characters, it's shrouded with uncertainty ano a hint of mystery. There's the leader of the group of course.

Just waiting for a group of bandits to come and try to occupy the area and Rick n Co get into a huge battle with them. Ending the season with a major character dying.

This show is in desperate need of fresh ideas. It's stuck in a cycle. But its a ratings machine, so I doubt the makers of it will be arsed.

Liking the new direction, trade with different settlement has more potential than finding a new big bad. Liked how Gregory was an ass but still one of the 'good' guys, hopefuly Negan is not as cartoony as the Governor.

Yea good episode. Like how they have introduced multiple communities now rather than just one good vs one evil.

Gregory was rather interesting. Seems like a coward who sees his own interests first. Expecting a stab in the back at some point.

Jesus is a great character.

Rick as badass as ever

They are building negan really well so far. Limited pieces of information to build his reputation and aura. Can't wait till he shows up.

@RED wrote:Ep 11 was a nothing episode.  Same ol same ol entering a new community, meet new people, new characters, it's shrouded with uncertainty ano a hint of mystery. There's the leader of the group of course.

Just waiting for a group of bandits to come and try to occupy the area and Rick  n Co get into a huge battle with them.  Ending the season with a major character dying.

This show is in desperate need of fresh ideas. It's stuck in a cycle. But its a ratings machine, so I doubt the makers of it will be arsed.

It's nothing like that. Don't worry it's not going to be another woodbury.

I personally thought The Governor was one of the best villains out of any TV show. Season 4 really humanized him but somehow made him even more evil. David Morissey was fkin great, at one point he was carrying the show.

David Morissey was really good. But they toned governor down a lot. He was a lot more brutal.


Man i can't wait for Negan. Rick thinks it's going to be so easy

The best villain in the show so far has been Shane and it's NOT EVEN CLOSE. He was built amazingly for 2 seasons. And it's no coincidence that those seasons were the best seasons of the show so far.

This last episode was decent. Negan sounds badass. But Hilltop bs was garbage. What kind of a pussy ass community is this? How the *bleep* have they survived thus far? One of their own comes back and stabs the lead guy and everyone else is just standing around, it has to be Rick's group to save their leader. Lazy ass writing I swear. Rick's 5 person group could just as easily have taken all their food without even negotiating. The whole negotiation between Gregory and Maggie was cringeworthy.

Did anyone notice the Negan foreshadowing? I never read the comics but something Jesus said seemed ominous.

Spoiler:
Idk how many know about Negan's introduction in the comics. I never read them but it's a pretty well known *SPOILER* spoiler that he is introduced by killing Glenn in front of everyone with a baseball bat.

Jesus said something to the effect of how Negan killed one of the Hilltop community members in front of them when they first met to let them know how he was going to be "right off the bat."

Yup. And they have also teased it previously back at Terminus

hilltop is a jobber community, jesus is cool though

abraham death flags, give him a few more eps

I'd rather it be Abraham than Glenn or Daryl.

My thoughts on the latest episode of TWD:

Ok now it's official: Rick and the gang have lost their moral conscience and turned into psychopathic monsters killing people for food. Those of you who have read the comics know that Negan and co are bad people. But guys like me who still haven't read them yet, and more importantly, Rick and his guys still don't know that. Only Sacha, Abe and Daryl had a confrontation with them, and they still made them pay cash immediately with a rocket launcher. So as things stand right now, our guys had absolutely no reason to go after people who most of them didn't do them any harm and kill them in their sleep. I feel Glenn's time is near. When he saw those photos of people with smashed heads on the wall, it's like a window opening to his own fate.

Anyway, looks like the next world made them all act like monsters. I won't feel sorry if many of them die. They literally asked for it.

Page 16 of 30
Permissions in this forum:
You cannot reply to topics in this forum
Latest topics
» The Bundesliga & 2. Superliga DELUXE "Bundesgalactica" 2021/22 Thread

Yesterday at 11:58 pm by BarrileteCosmico

Yesterday at 7:25 pm by silver

Yesterday at 7:17 pm by silver