Goldman Sachs wrote:The football (or soccer if you prefer) World Cup is nearly upon us. It’s a big deal.

Beginning June 12, millions of fans across the world will be suffering from an acute urge to watch the action on the screen. Symptoms may include frequent visits to the pub, tired eyes for those who stayed up all night watching games, or even, dare we say it, a certain prioritization of football over work. Stocks of beverage companies will no doubt feel the benefit.  Plenty of funny headgear will make its way onto the TV. Even those with fairly gloomy dispositions will for a few weeks think that—just perhaps– their mediocre teams could topple much better outfits. Ha!

But which team will win the tournament? 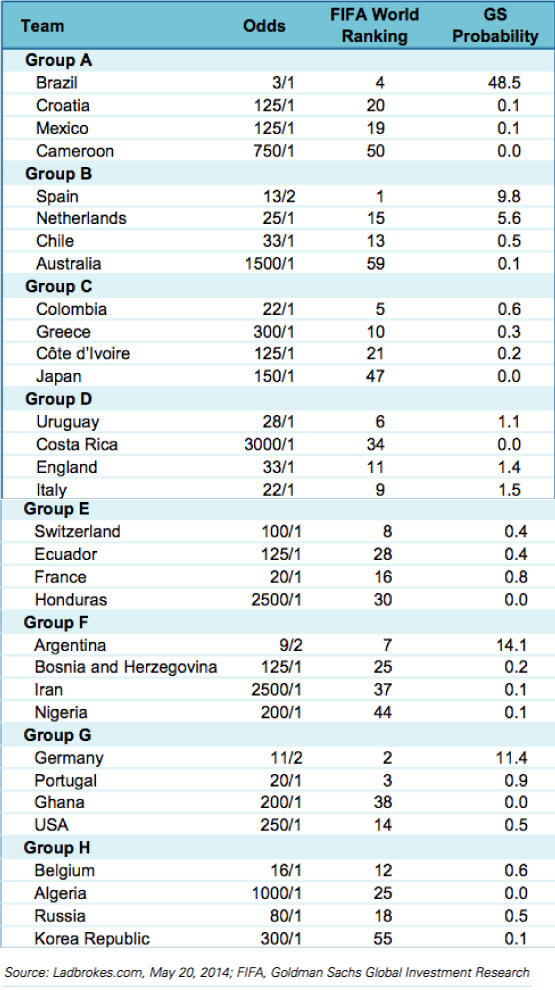 “The predictions for each match are based on a regression analysis that uses the entire history of mandatory international football matches—i.e., no friendlies—since 1960. This gives us about 14,000 observations to estimate the coefficients of our model. The dependent variable in the regression analysis is the number of goals scored by each side in each match. Following the literature on modelling football matches, we assume that the number of goals scored by a particular side in a particular match follows a Poisson distribution.”

Brazil stands out as the clear favorite according to Goldman Sachs, well ahead of even reigning champion Spain. Cameroon, Japan and Honduras on the other hand might as well give up now, according to the Goldman data. The actual odds also favor Brazil although the gap with other teams is less stark than in Goldman’s model.

There is also bad news for England, according to the model. The Three Lions are likely to bow out early without a win as Goldman predicts that the team may not be able to beat footballing heavyweight Costa Rica.

so they considered matches from the 70s as being relevant today? american taxpayer money well spent lol

Sachs vs the reborn Paul the Octopus.

GS was not bailed out...

Maths and advanced stats have no place in football.

BarrileteCosmico wrote:Anyways in 2002 they had no semifinalists right and in 2006 and 2010 only 2 each. So that's 4/12 success rate. Which is a bummer because i'm pretty much predicting the same thing.

So you are predicting Argentina to lose to Brazil in the final???

You know what would be the biggest deception (dunno if possible, though, don't have the schedule at hand): A Germany vs Italy final with Germany winning XD

Here is the entire pdf for those interested. It also has interviews with some of the brazilian squad and beckenbauer.

& after that, rest in peace

Today at 12:35 am by BarrileteCosmico

Yesterday at 9:52 pm by BarcaLearning