I would not mind if he only said this :
Luis Enrique: "Xavi? He's a friend and an ex-teammate. We'll sit down and talk about what he wants and what we want."

but kind of disrespectful saying his situation is a bit similar to Mashcherano which is truly nowhere near.

Overall his reply looked smart. so it seems Cesc is on the transfer card otherwise why would he say decisions will be made later.... He din say similar with mashcherano which means Mashcherano has more chances to stay than Cesc. Thats a good indication.

I dont want both Alexis and Pedro to be sold. i wish its pedro though leaving. wondering why no one asked about Alexis....

He also said he sees Mascherano as a DM.

His Xavi comment doesn't surprise me. You have to look at his own playing history. He retired with 32 from the national team and with 34 alltogether with the reasoning to make room for youngsters. At Roma he tried to oust Totti immediately. It doesn't surprise me that he doesn't see Xavi as an integral part anymore and just "like Mascherano". The question mark will be who he believes can take his role then. Because his Fabregas comment wasn't any more flattering and I don't see how Iniesta and Rafinha will be enough midfield options if we sell Cesc and possibly let Xavi go or piss him off.

Saying he sees Mascherano more as a DM than a CB I hope he doesn't have the idea to play Busquets and Mascherano together in midfield.

Donuts wrote:I can see your point but i don't know, maybe we are reading far too much into a sentence but my opinion from this is neymar and messi get that special mention because they are essentially the certain future of the club.
becides Messi and Neymar need that security to have confidence, Xavi doesn't seem to require it as much as the rest just like Puyol or Iniesta haven't.

Xavi like you said has a one or two seasons left at best and should stop being looked at as necessary, despite being the only real option we have currently for our current play style.

it's still far too early to know what will happen this summer but i have a gut feeling we are prioritizing Xavi's replacement heavily (maybe even more then a defence) we need to buy his replacement or have a certain one by the end of august because after the transfer ban Xavi will be 36 and practically dead for us.

I think he will discover very quicky, Mascherano cant play midfield for a possession team. I am not even worried.

Hopefully Mascherano doesn't get the opportunity. It's time for him to go.

I don't care for his Xavi comments but actions speak louder than words, we'll see how he values Xavi when the season begins.

I don't know if this is how things have been done in the past or not but I did find it quite surprising.

i don't see anyone else in the club that is really captain material, so it'll most likely be Xavi again..
Iniesta would be vice, i assume and messi third, basing it on seniority.

messixaviesta wrote:I don't know if this is how things have been done in the past or not but I did find it quite surprising.

I find it extremely surprising....I personally don like the voting thing. Its human nature, a group of people never agree on something even noble. So i prefer the leader(coach) to choose it straghtforward. If he is with the team for few days, it should not be difficult to identify whom players prefer most. For me,asking people about it means shaking the harmony unnecesserily

messixaviesta wrote:I don't know if this is how things have been done in the past or not but I did find it quite surprising.

I dont know why Enrique is being soft and mild here. Just take a decision and let them follow. However i dont think it will matter much , after a while Coach will figure out the correct and wise decision of making Captain.

Luis Enrique: "I might ask the club to build a scaffolding because I like to watch training from a position high up. It allows me to control the players and spaces between the lines and I could also record the session." 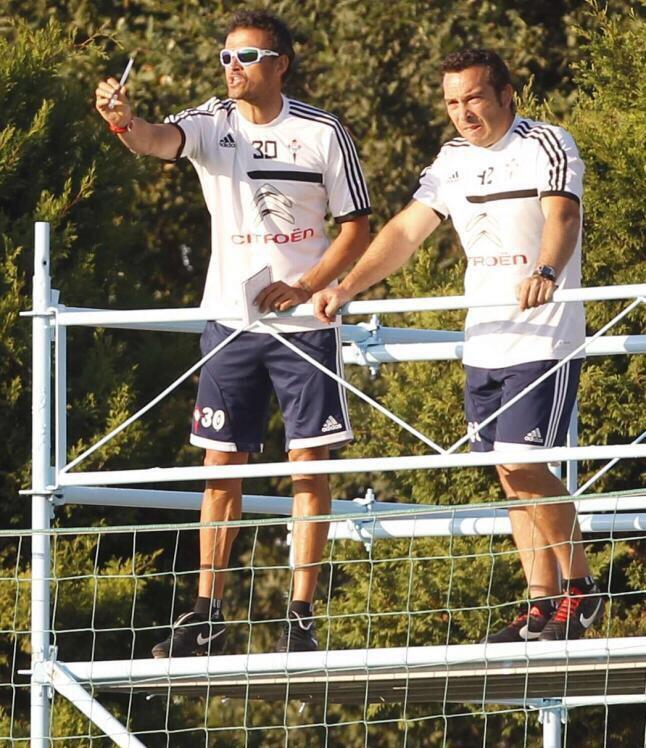 Barça is beginning a new era with Luis Enrique, who you know very well. Is he the answer to the team’s needs?

Yes. After Guardiola and Tito were at the helm, this season was very difficult, because of all the things going on. The team didn’t win any important trophy, and I think that the arrival of Luis Enrique will be very positive, as he knows the club inside out; he was the captain for many years and imposes respect amongst the players.

From the years you spent under his orders, what are your memories?

He was a coach who liked to have the ball, who did his homework. He liked to play three at the back, with wingbacks. He liked to study the rival extensively, and he used to show us videos on how to defend and how to attack. He also liked to organise many activities for the team, like barbecues, paintball matches, bumper car races…and that, whether you believe it or not, helped us form a good bond between us to win promotion to the Liga Adelante.

Right. When things weren’t going very well, he told us not to worry, to have trust in him, I’m sure that he’ll do exactly the same thing with the first team. Besides, he has many things to prove at Barça.

In one word, how would you describe him?

Luis Enrique gave a media conference on Wednesday in the company of director of sport, Andoni Zubizarreta, his first such appearance since starting work with his players. Asked what kind of team he is putting together, he replied that “I want a team that is faithful to everything that has won it so much before, a team that scores goals, that defends well, that has playing resources, that plays the same at home and away … I don’t just want results, I also want to win playing nice football”.

He doesn’t see his team sticking firmly to any set style of play, but instead “we’ll be using all the resources we can, and one of those is being unpredictable … This team has been put together to play well and carry the weight of matches. I like having players that can offer you different playing options and that are able to surprise opponents”.

There have been plenty of changes to the Barça squad this summer, including the departure of two of the captains, but when asked who’ll be leading the team this year, Luis Enrique replied that “leaders are not imposed, they have to appear, they appear spontaneously and we’re already starting to see that … I am a born leader myself, and I lead this team. The challenge is to ensure that this has an impact on the team”.

He ended by explaining that “rather than being about individuals, our chances of success next season depend on everybody’s efforts combining in the right way.”

I like the quotes. I feel that his wanting to play the same home and away clashes a bit with the tone of the rest of his quotes however, which seem to emphasize a more pragmatic philosophy within the team. It will be interesting to see what direction this Barca takes.

I really like the fact that he keeps speaking of a plan b to a point in us having a surprise element to our game, which is something our that makes us unpredictable. Also loping for players in the market that help us with this.

Meh, Tata said the same thing and was unpredictable like in the first clasicco but then he just kept the same formation/strat.
hope luis keeps his word.

Positional play about to improve markedly

Sport reporting that Messi will play as a traditional 10 under LE and that this could be in a midfield diamond or a double pivot system .

Also if you guys get a chance to read his recent press interviews he actually sounds a lot like Tata : dynamism, various attacking avenues, pressing, etc.

yeah, but the difference is that enrique has balls. what he did at roma with totti and the team definitely took some

Which would you prefer

343 LE plans on according to MD


Or the more standard version with wingbacks and some other combination of midfielders?


I like the look of that first one in terms of getting good players in their best positions, but dont see how it doesnt get raped tactically.

Turns into normal 4-3-3 in-game with Alves back and Suarez moving wide left (or Mascherano back at CB and Bartra at RB to keep Suarez central), depending on the situation.

I like both, 3-4-3 for when la liga clubs or scrub teams in general park the buss against us and 4-3-3 against bigger sides.

Turns into normal 4-3-3 in-game with Alves back and Suarez moving wide left (or Mascherano back at CB and Bartra at RB to keep Suarez central), depending on the situation.

Id like this alot more than what MD had up. Also alot easier to make subs offensively or defensively to change the game without having to change the formation.

For example Rakitic can come in for either Busquets or Mascherano to add offence. Likewise Deulofeu or Pedro for Alves/Bartra.

Defensively you could in theory remove Neymar for Alba. Giving you the Valencia double leftbacks on one side, Bartra and Alves on the other, Busquets and Iniesta in the middle and Messi with Suarez in front. 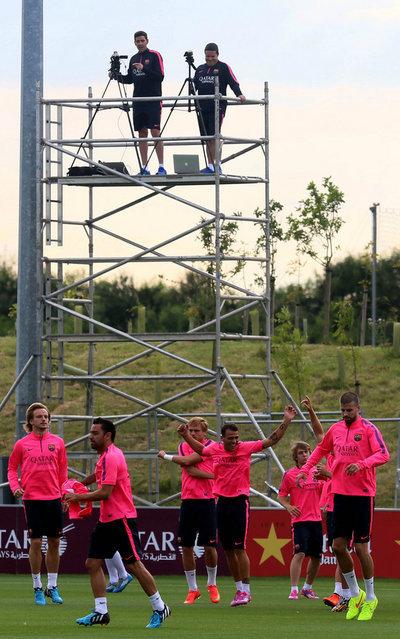 Today at 6:19 pm by RealGunner

Today at 5:07 pm by Robespierre

Today at 5:04 pm by Robespierre