I don't discriminate how clubs get big or how long a club stays big for. A big club is a club who has a great potential for success.

TV money rights alone won't change much, I'll agree there, especially in a short run but give it time and you'll see what Barca and RM are today. They are the end result of what happens when money and popularity from TV rights are accumulated over a long period of time.

Lord Awesome wrote:And how many big teams does the PL have.

In my count it's 6 or 7, atm. And to me it's no surprise that even now the PL has the most candidates to win the title.

I'd say 3 or 4 max and two of them are oil money clubs so obviously not part of the same debate.

Give any league Abrahimovic type money and you would have more challengers that's obvious.

That's not what i'm arguing here though, more that the tv money doesn't have as much impact as people are led to believe.

Clever and ambitious managements are the real key to it all, if you don't have it as Valencia proved you can't retain long periods of success no matter how much tv money is around.

We've seen time and time again though that Clever and ambitious managements do everything right, and when they do too well, they can't afford to pay their best players competitive wages and/or offer them the ability to play for championships consistently.

TV money doesn't guarantee that teams will do better, but it gives them the ability imo, to keep their better players, and add to the squad. I know these aren't amazing examples or anything, but just this year Southampton gave a new deal to Shaw, Everton to Baines, and Aston Villa to Benteke. All those players are such huge parts to their squad, and I feel like a couple of years ago, we would have seen them move for modest transfer fees to bigger clubs. Maybe I'm wrong but I thought it was interesting seeing them stay. They still might leave soon, but I think teams are at the point where they don't have to sell their players nearly as much as in the past

It also gives teams the ability to take risks and buy players for decent transfer fees, without having to worry that it will somehow cripple them. Everton and Southampton had the best transfer windows I can ever remember them having. So far a lot of the players bought have been just ok, but give teams time, most of them never even had money to spend before lol. The prem TV money just started to come in, right now it hasn't made a big impact, but I feel like we are seeing only the beginning. I feel like in a couple years time we might see some crazy things happening.

Lord Awesome wrote:And how many big teams does the PL have.

In my count it's 6 or 7, atm. And to me it's no surprise that even now the PL has the most candidates to win the title.

In La Liga as things stand RM should start pulling away due to Barca and Atletico's inconsistency.

Serie A: Juve. Though I'll give a shout out to the Roman's for starting so well.

it seems like your describing current form as opposed to club stature. the standings for one year aren't an indication of how big the clubs are. kind of like how last year ManU had the prem wraped up by februrary.

Spanish teams only pick up "gems" because of necessity.
You would see the same type of signings that the premier league sees if the money was there.
It's kind of an impossible trinity type thing. But with two factors...
You can have:
1. Lots of money
2. Improvised, smart transfer policy
Pick one.

Take Micheal Laudrup for example...
After being acclimatized to the "La Liga scenario", he moves to Swansea.
First season, he makes the genius signing of Micu from Rayo... tremendous success.
Then, season two, after being exposed to the "English scenario", he signs that walking disappointment, Wilfred Bony.
Mauricio Pochettino, on the other hand... excites me... He really knows how to get the best out of his players. And when Luke Shaw buggers off, I'm sure he'll find another talented player to fill his boots for very little money...

The reason La Liga is dominated by Madrid and Barca isn't because of TV money like the myth goes its because the the contenders/pretenders were horribly mismanaged.

Deportivo, Betis, Valencia etc etc and so on could have competed for decades but they chose to self destruct but managed their finance horribly.

Even Atleti right now need to sell to buy every year because of previous awful management..... La Liga clubs have no one but their selves to blame for not being to compete.

Not Madrid, Not Barca, not the Spanish FA, not the TV rights.... themselves and only themselves.

It's nice to dream though.

Some extra bit of money from Television rights would still help these clubs though...

Not necessary. Just look at the bundesliga. The TV rights are distributed quite even, and yet Bayern are 20 points clear. And I am pretty certain that the same would have happend in the PL if it were not for the oil money/billionaires, who wanted a new toy to play with.

Spanish teams have always been good at finding talents in south america, but the owners are quite awful. I swear, if the TV rights would be distributed as even as the PL or Bundesliga, the owner would find some other way to f#ck things up.

Too many IFs on this forum

well not necessarily as if they had more to spend they would be malaga and players like samperio couldn't break in their team?

The way they manage the money is a massive question.

On the long term you need sustainable and consistent Cash Flow/Revenue.

A TV Deal with say 50-60M average money to all teams will benefit the entire league. Money money for Youth Development and Stadium money is used wisely and in the long term can help some of the teams become super-powers.

This thread is so hypothetical.

3 out of the 4 finalist in the european competition(Europa League and CL) are spanish teams and, apart from Real Sociedad, only spanish teams have been able to knock out other spanish teams from europe this season.

harhar11 wrote:3 out of the 4 finalist in the european competition(Europa League and CL) are spanish teams and, apart from Real Sociedad, only spanish teams have been able to knock out other spanish teams from europe this season.

This is the money the Bundesliga clubs get from the DFL from the TV rights. The amount of money is distributed via a certain formula that is calculated from the placement of the clubs during the last 5 seasons, the current season is weighed with a factor 5, the season of the years before that with a factor 4, 3, 2 and 1 respectively. The money consists of national (468 mio Euros) and international (27 mio Euros) TV marketing. 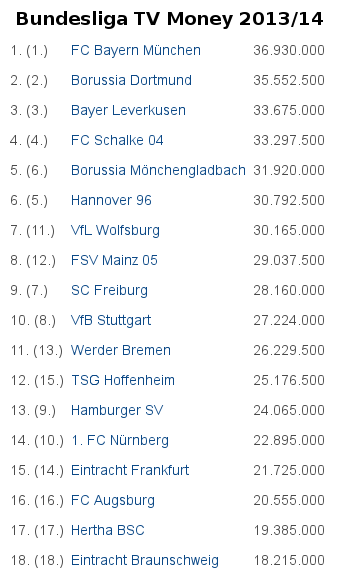 Well, on the plus side this means that we have still quite some reserves where we can increase the overall income for the BL clubs.

Bayern sucking this season really doesn't help either. Hopefully Dortmund will have their players regenerate over the course of the World Cup, most UCL contenders will start next season with tons of injuries, especially the PL clubs.

Well, Bayern usually have an off-season after the World Cup, so it is indeed a chance for Dortmund to pounce on (or maybe even the Schalke kids who will have the older players back from injury next season, too, and who collected some experience the last season).

Well, that's what t-online.de wrote (27 mio Euros). I guess that money is still from the old contract, while the new contract was mentioned to yield more money, but that's valid from next season on or so.

Here are the new numbers for the BL season 2014/15. The money listed is the money the BL clubs get from the national marketing: 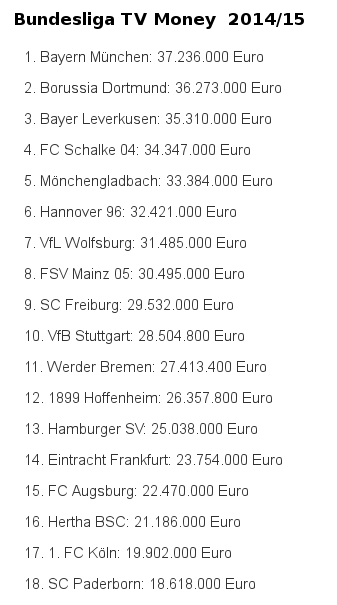 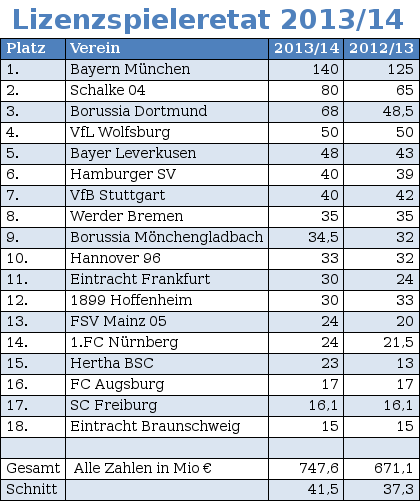 How does Serie ZzzZZzZ get more TV money than the GOAT league with DAT Mehdrid and Barcelona in it?

Had to look at PL and Serie A 5 times to see what fussball was on about. Then realised he meant la liga lol

anyways, Madrid and Barca steal all the money, rest get nothing. Unlike Serie A who share it much more proportionately and hence the difference.

Well, in Serie A the winner still has 5 times the money than the last one gets.

(merged the TV money threads we already had here)

RealGunner wrote:anyways, Madrid and Barca steal all the money, rest get nothing. Unlike Serie A who share it much more proportionately and hence the difference.

RealGunner wrote:anyways, Madrid and Barca steal all the money, rest get nothing. Unlike Serie A who share it much more proportionately and hence the difference.

Nah. What I'm talking about is the total sum, not how it's split. Serie ZzzZzz as a whole receives € 846M. GOAT Liga receives € 755M. Genuinenly surprised.

midget league doesn't have enough relevant teams to rival with serie A .

farfan wrote:midget league doesn't have enough relevant teams to rival with serie A .

True. Also, Italian TV companies are just willing to pay more for Serie A than Spanish TV is willing to pay for La Liga. Both leagues get most of their money from domestic TV rights, not international.

Page 4 of 6
Permissions in this forum:
You cannot reply to topics in this forum
Latest topics
» Cristiano Ronaldo is the GREATEST OF ALL TIME. Now Sit down and STFU

Yesterday at 7:12 pm by BarrileteCosmico

Yesterday at 12:06 pm by Robespierre

Yesterday at 11:41 am by BarcaLearning

Yesterday at 5:28 am by BarcaLearning