Since going by the Movie thread there seem to be a few comic fans on here I figured we could use a thread to discuss them. This thread will be fairly open to anything related to comic books and the characters featured within, including but not limited to movies, comics, cartoon, and what not.


To start things off, what do you think of DC's Justice League: Doom. While I find that there's quite a bit that's quite good about it (voice acting, the action, some of the characters themselves, and the source material) there are a few things about the story that just really cause issues for me... they screwed a few things up with their adaptation, particularly in their attempts to account for Hal (Fillion as Jordan's voice is goat, btw) rather than Kyle and how he's taken down.

Well I've fallen off the wagon in terms of comics over the past year. Still haven't read nothing, but a few of the new DC 52 series and almost no new material in the Marvel universe.

I honestly don't know where to start on the Marvel side...it's ridiculously wide open in terms of different directions to go in. Just haven't settled on where I want to go.

I enjoyed it overall, but here are some of the differences between the comic book version ("Tower of Babel) and the movie:

1. Vandal Savage is the main antagonist in the film, while Ra's Al Ghul was the main antagonist in the comic.
2. The records of the Justice League are stolen from the Batcomputer by Mirror Master (on Vandal Savage's behalf) instead of Talia al Ghul (on Ra's al Ghul's behalf).
3. Plastic Man and Aquaman were not featured.
4. Barry Allen was in Wally West's place.
5. Hal Jordan was in Kyle Rayner's place.
6. Cyborg was added for the film and was not part of the original storyline.
7. There are also differences in the methods used to take out each member of the Justice League: (i) Martian Manhunter was poisoned to make his skin excrete magnesium in the film. In the comic, his skin was coated with nanites which turned his skin into magnesium; (ii) in the film, Wonder Woman was also poisoned with nanites that caused her to see everyone as Cheetah. In the comic, a nanite is injected into her ear, putting her in a virtual reality battle with an evenly matched opponent; (iii) an explosive bracelet is put on Flash in the film. In the comic, he was shot with a special "vibra-bullet" that caused him to experience seizures at light speed, making 22 minutes feel like months of pain; (iv) a Kryptonite bullet was used to defeat Superman in the movie. In the comic, he was exposed to a special type of red Kryptonite that made his skin transparent, causing him to experience a power overload from absorbing too much radiation from the Earth's sun; and (v) Green Lantern in the film was made to doubt the powers of his ring and making it look like he failed to save some people which were actually androids after being exposed to the Scarecrow's fear gas. In the comics he became blind due to a post-hypnotic suggestion that was placed into him while sleeping that makes him believe he is blind so the ring would cause that to happen.

When it came to deciding if Batman should remain a member of the Justice League, Wonder Woman, Aquaman, and Plastic Man decided against it while Flash, Green Lantern, and Martian Manhunter vote to let Batman stay, leaving Superman to make the deciding vote. Batman states that he knows what Superman's vote is and leaves. In the film, there was no mention of who voted upon the judgement of Batman, as Batman resigns before the League can vote.

McLewis wrote:Well I've fallen off the wagon in terms of comics over the past year. Still haven't read nothing, but a few of the new DC 52 series and almost no new material in the Marvel universe.

I honestly don't know where to start on the Marvel side...it's ridiculously wide open in terms of different directions to go in. Just haven't settled on where I want to go.

Download Comixology and wait for the free comic event. They usually let you download all the new number 1's but they only do it once or twice a year.

Yea, I know the changes that were made, and I don't have a problem with them just because they were made. I just think some of them did detract from the story overall.

Since Nova is supposedly going to appear in GotG, I hope we can all agree that it needs to be Rich Rider and not Sam Alexander. Also, Cosmo definitely should make an appearance on Knowhere.

Why did they cast Batista

Jason Momoa was up for the role, don't know anything about the comics, but he is certainly a better actor than Batista. Will still wait to judge his performance until I have watched the movie.

Yeah, I was really hoping they would've gone with Momoa. I really liked him as Khal Drogo/Ronan Dex and I thought that would have been a pretty good rendering of Drax the Destroyer.

This move is going to be so unreal and awesome I'll restrict my judgment till I see the movie about the casting choices. Oh, and I have an idea this guy will GOAT the whole thing:

On a second thought, Batista might not talk much so maybe he will get away

Batista will be fine. All he needs to do is shout and destroy shit which he can do pretty convincingly.

Second, I think I am in love with the director James Gunn. Here are his thoughts on the trailer:

We’ve recorded most of Bradley’s dialogue already. I suppose you would expect me to tell you he’s fantastic and his characterisation of Rocket will blow your mind – so don’t believe me and just wait to see (or hear) it for yourself.  In all truth, we hired Bradley because he’s able to do both comedy and drama – it’s the thing I look for most in the actors on all my films – and to truly sell Rocket – for you to believe a Racc00n can talk (and blow up and shoot tons of stuff) we need a well-rounded actor.  To create the line-up shot for the trailer, 15 people worked on Rocket and 15 people worked on Groot. That’s 30 people. For one shot.

I love Groot so much I get teary eyed when I think of him sometimes.  Essentially, all the Guardians start out the movie as bastards - except Groot. He’s an innocent. He’s a hundred percent deadly and a hundred percent sweet. He’s caught up in Rocket’s life, really.  The shot of Groot in the trailer took a few weeks to create, but the development of his look and how he moves took the better part of a year.

Zoe is about as un-intimidating as you can imagine! She gets in the zone the moment that cameras start filming – but before that she’s basically her loud, brash, completely lovable and goofball self.  She got it easy with the makeup – it only took about four hours to put on, whereas it took Dave Bautista and Karen Gillan six hours or more.  Zoe and Karen are the two most hardass characters in the movie – they’re our Clint Eastwoods. It should take more than a few people by surprise.

The "bunch of a-holes" line is still in the trailer, which I love. That was an ad-lib I threw to Peter Serafinowicz on the day we were shooting. He wasn’t sure he wanted to say it – it’s not something British people say – but it works perfectly in the trailer. The movie has a lot of edgy humour, unusual for a comic book movie. But we were encouraged by Marvel to take risks, so we did.  However, we never wanted the humour to get in the way of the fun or the emotional heart of the film – those things came first.

He is definitely one of us

Miles Teller, Kate Mara, Jamie Bell, and Michael B. Jordan have been revealed as the 'Fantastic Four'.

So worst casting so far: Fantastic Four or Batman vs. Superman? Those are both pretty horrible casts. 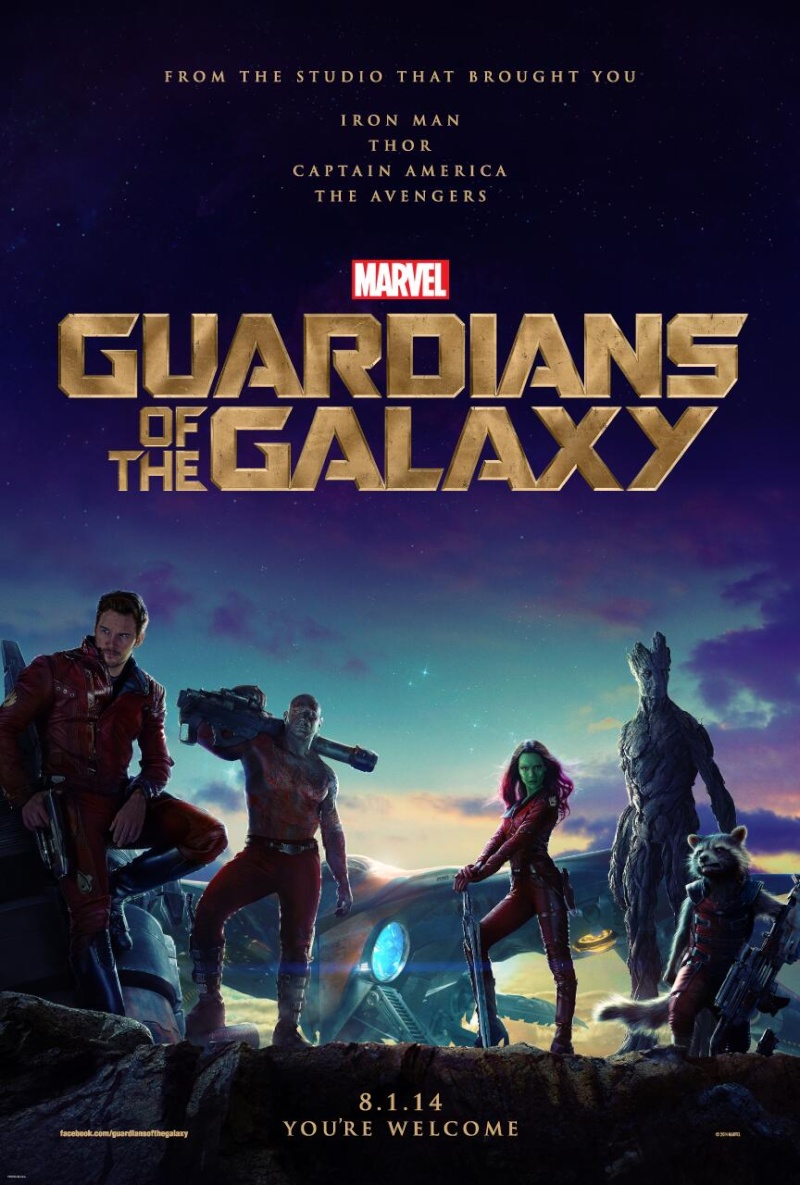 I always thought Paul Bettany was the perfect John Constantine, but he's probably to big for television at this point unless it was something on HBO.

Matt Ryan does have the right look and he is British too.

The big question is ability to act in the role, not looks or nationality.

Hey Moto, have you read Planetary or Transmetropolitan?

I really, really hope GotG does well so that Cosmic Marvel can get a foothold in the cinematic universe and we can potentially see this animated:

I don't believe I've read either series, but if you recommend them I'll try and pick them up on Comixology.

I am still wondering if we will ever see Sentinel, Heroes for Hire, or Captain Marvel in any of the actual movies.

I'm stoked for Dr. Strange though, I think that will be the next major fan service for hardcore Marvel fans.

It really depends on which Captain Marvel you mean... if you're referring to Batson or Mar Vell. The former is most probably never going to happen, as it seems unlikely that DC will ever get their shit together on the live-action front. Mar Vell may be a possibility if GotG does well enough and they want to make a move that bridges Cosmic and Earth Marvel.


I would most definitely recommend Planetary. It's one of the best series I've ever had the pleasure of reading. I really enjoyed Transmet as well but it's a bit different from the other comics we've discussed so far.

Yesterday at 23:27 by Great Leader Sprucenuce