Hapless_Hans wrote:He's flopping hard, that's what I have understood through repeated and close viewing.

Every player under that lame duck of a manager has looked awful.

He's talented, but he's had his confidence ripped apart by that clown in the dug out.

You'll see just what a good player he is once we get rid of LVG, of that I am certain.

He'd be great for Klopp, for example

I for one would not see Ander perform so well within Klopp as Ander at his best works in a possession based system in which he sees a lot of the ball as many managers seem to mistake that his incredible work rate can be translated into good defence, and even though a United poster in the United section posted stats for me as to how he HAS improved in defence, his work rate if anything has him overused and takes away from his joy of playing with the ball.

LvG's mind is like a chasm of broken lights and sound, you never know whether he is absolute genius or just trial and error. Under Mourinho I fear the same for Ander as there is little in Ander bar his work rate that Mourinho will use but then again we all have been wrong with managers in their new teams (like when people predicted some deductions for Pep before Bayern) so it has yet to be seen. 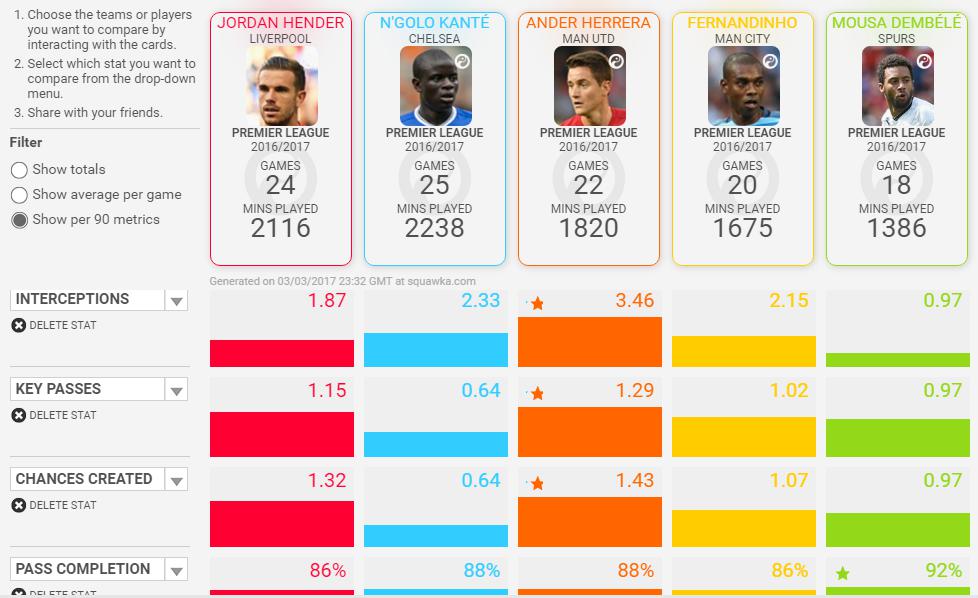 How this guy is not getting the more credit for his work? I know stats wont give the full picture and mind ya I am not saying he is better than Kante or anything (despite the fact that he is having  better stats than him in almost every dept

) Its sad to see him being so underappreciated and underrated  by neutrals when  fake players like Eric Dier and __________ (feel free to fill) getting all the love.
And its not just neutrals. Even some United fans consider him not upto the needed level despite him being our best player this season along with Zlatan and Valencia and are calling out for an upgrade next summer

.
Easily one of the most complete midfielders in the league.

The shiniest turd out of them all, except Kante who doesn't even play the same role as him

top 5 in the world

One of my favorite players in PL. He plays his heart out every game.

He's very good. As mentioned stats don't always tell the whole picture (especially per 90 which can be skewed by coming on against tired opponents, only playing when fresh, if the player is not prone to playing the full 90 all the time) but he's definitely a very good player and I was always happy he wasn't a first choice player but I guess that's changed now.

ES wrote:The shiniest turd out of them all, except Kante who doesn't even play the same role as him

When Carrick plays(which is half of the total games Herrera has played approximately) both Kante and Ander plays the same role for Chelsea and United respectively. In a double pivot yea he fulfills more of the Matic role.

But even then I dont think that belittles  Herreras quality this season. When called to attack in a slightly forward role he has repaid the faith (for a player who is accused of being passive and sideways by many that key pass and chance created is surprisingly heartening ) and when called to be defensive in a double pivot with Pog he has simply been a beast.

And if you are saying I am comparing him with shit players, do know I have put players like Wanyama and Gueye as well in the comparison matrix thingy and none of them managed to outscore Ander.

Curtinho wrote:He's very good. As mentioned stats don't always tell the whole picture (especially per 90 which can be skewed by coming on against tired opponents, only playing when fresh, if the player is not prone to playing the full 90 all the time) but he's definitely a very good player and I was always happy he wasn't a first choice player but I guess that's changed now.

Only twice has that happened in the 22 games he has played this season.

I was offering a possibility of why per 90 can be deceiving (and other examples) not just for Herrera, but in general.

Deserves more than anyone to be our next captain. But knowing Mourinho he will probably make Zlatan for a couple of years and then Pogba when Z leaves.

Curtinho wrote:I was offering a possibility of why per 90 can be deceiving (and other examples) not just for Herrera, but in general.

@ES and btw everyones favorite Kante was nowhere to be seen today.

Finally, the world is starting to take notice.

Long overdue.. If this guy played for one of the 'big' teams, he would already be a star.

top 5 in the world based on form

Firenze wrote:top 5 in the world based on form

Ander has been constantly marred by the clueless managers who've come in and out of Manchester United post-SAF in not using him the way he really is supposed to and due to his endless stamina, versatility and work-rate and I am glad Ole is using him to his strengths rather than a water-carrier like Mourinho or Moyes did, even if not the role Bielsa crafted and had him bloom within.

Most shots on target (2)

)
3. taken out of the team and put on bench to make way for Nemanja Static after having the best ever season for us.

The guy is forever underrated. Even now, he is not getting the same praise as others when he's been the best player after Pogba since Ole's taken over.

Firenze wrote:top 5 in the world based on form

I meant in midfield btw. Name 5 better than him. You can't.

No, I agree with you. I was laughing at Unique laughing about what you said. Herrera is a boss right now. Should be our captain imo. Him or Pogba.

My favourite player under Ole. Woodward can go and blank himself.

Similar topics
» Imposters acting as United executives (negotiating for Herrera)
» Forget Thiago, Ander Herrera Baby!
» Herrera vs Henderson vs Fernandinho
» Could Miguel Herrera manage in a top league?
» Alcacer vs Jese vs Koke vs Raul Garcia vs Ander vs Isco