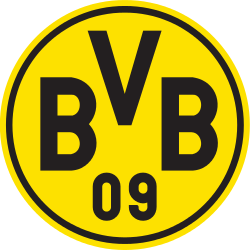 Nickname: Die Schwarzgelben (The Black Yellows) or Die Borussen (The Prussians)
Borussia Dortmund are based in Dortmund, North Rhine-Westphalia. The Ruhr Area metropolis Dortmund is the 8th largest city in Germany, and the BVB managed to amass 55,000 members. Borussia Dortmund belongs to the most successful German football teams. They were 7 times German champion, won the DFB Pokal twice, and the DFB Supercup thrice. Internationally, they won the Champions League and the Intercontinental Cup in 1997 and the Cup Winners Cup in 1966.

Dortmund's stadium, the Signal Iduna Park (formerly "Westfalenstadion") is an amazing venue which has a capacity of 80,720 people for domestic matches (seats+terraces) and 65,614 people when it is converted into an all-seater stadium for international matches. Especially the Südtribüne, a terrace with 24.454 capacity is a fantastic sight. This terrace is usually filled to the brim with Dortmund supporters and thus called the "Yellow Wall". The Signal Iduna Park hosted matches in the 1974 and 2006 World Cups, international matches of the German NT and CL and EL matches. 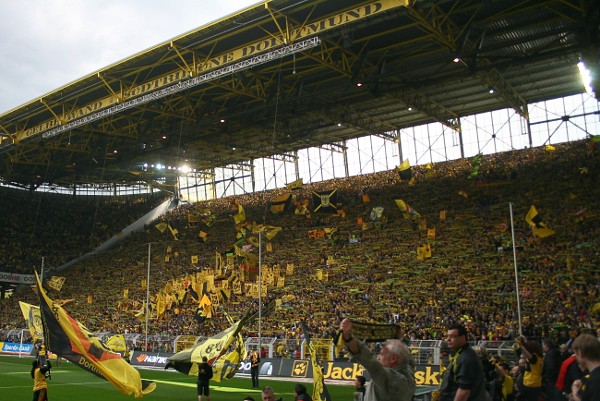 Borussia Dortmund have a long-lasting rivalry with Schalke 04, and the matches between the two teams are known as as the Revierderby ("Revier" being the local name for the coal mining area in the Ruhr Area).

Everything about Borussia Dortmund can now be discussed here. Pity that the Dortmund section wasn't a success here, but some things can't be helped, I guess.

WHY? WHY? you could have just left the section there, even if not much was going on imo.
Please don't remove the Bayern section too, I'd like to be able to post there every other week

Bayern section is next

How about a 'German Football' and 'Italian Football' section? There's like 2 posts a week in every Italian section bar the Juventus one.

Yohan Modric wrote: There's like 2 posts a week in every Italian section bar the Juventus one.

Maybe not 2, but the sections aren't exactly booming with activity.

Nah current system is adequate. No one will accept that idea anyways.

Unification is best for business.

Its been literally a dead dump for years,the only prominent activity being rwo moving Bayern related threads from the GS to the Bayern section

Fair enough Bayern/Dortmund are big clubs, but until they have a group of fans who post regularly, they should all just be merged into one section imo. Same goes for Inter and Roma.

Yohan Modric wrote:Fair enough Bayern/Dortmund are big clubs, but until they have a group of fans who post regularly, they should all just be merged into one section imo. Same goes for Inter and Roma.

Our posting is more about quality than quantity, though you're clearly the wrong one to appreciate that

Auba stepping up for once was nice to see.

BVB vs Neverkusen, what do you think RWO

WEll, I hope they won't annihilate each other with their high energy play, now that Roger Schmidt coaches Bayer... XD

Can't wait until Dortmund have everyone fit, they'll be a huge force once again.

Absolutely. Last season they mainly lost a lot of points as practically all of their starting defensive players were out.

By the way, Borussia Dortmund made a profit of 12 mio Euros in 2013/14. This is less than the year before, but still well in the black numbers.

This profit is quite low for a team organised like Borussia. Anyway, they bought some players... I think that's why.

Well, they need to be careful that they don't have too much profit or taxes will eat them up. So they will likely invest wisely and thus keep the taxes low.