Roma striker Pablo Osvaldo has reportedly been fined and suspended for 10 days by the club after striking teammate Erik Lamela across the face.

According to Italian newspaper Gazzetta dello Sport, the incident occurred after Friday’s loss to Udinese when Osvaldo, angered by a wayward pass from Lamela during the match, reacted badly to the youngster throwing a plastic water bottle.

On Roma’s official TV channel general manager Franco Baldini says, "it was a lack of respect from Osvaldo to a teammate and, on the request of the coach, the player will be punished."

Osvaldo and Lamela apologized to each other and their teammates at training on Sunday. Osvaldo’s suspension meant he did not take part in the training session.

Being reported in italy that this happened. Thoughts?

jk,i think they should just fine him since hes a key player

I think its time Lamela to call Balotelli

Osvaldo : Lamela deceived me and is suffering with a black eye

Osvaldo hurt my crush Lamela....He can go to hell now

Prandelli please don't call him up anymore and stick with Matri

Should have punched Enrique.

The pass wasnt good enough so osvaldo got mad ? wtf ?

The thing is Lamela didn't try to pass...he went for the shot and skewed it wide...I know the play in question and Osvaldo was in a much better position. He had every right to be angry, but obviously this isn't the way to take out that anger. Now we're down another striker. At least we have Totti back for the Fiorentina match though.

Lamela is an awful ball hog though.I can't blame Osvaldo for getting angry but to deck him one in the kisser was way out of line..

Im pretty sure he didnt just hit him for not passing tho, supposedly that incident led to a shouting match and then that led to the punch, who knows exactly what they said to each other. Fights between teammates happen all the time in training tho, I dont think it deserves a suspension, just a small fine. 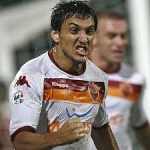 this probably damaged any hopes of another NT call up

I think him failing to score lately has damaged his chances more than this. Osvaldo has the talent for the national team, it just depends if he performs on the pitch or not.

This has killed any hopes he had of a call up during the next international break under Prandelli's policies, however if he performs well Prandelli is a forgiving coach.

Unacceptable and this should be punished heavily in my eyes, the team has a lot of new faces and a culture in the dressing room must be set. If peace has been made between the players then the punishment can be more lenient of course, however no one, no matter how important, can get away with this.

Unless you're Gattuso, then you can attack whoever the hell you want.

I think its being blown out of proportion tho, its a shame it got out in the press because it says they made up and together they apologized to the rest of the squad which is the most important thing. it is unacceptable but I wish he didnt have to miss any matches.

Wow, he really blew it with the national team now. Matri is gonna get the spot.

This sounds like a good rule of communication of strikers with midfielders.

Ibrahimovic is his idol

Eivindo wrote:Wow, he really blew it with the national team now. Matri is gonna get the spot.

Only temporarily imo. If he plays well once he comes back, I'm sure Prandelli won't really take this into consideration. Yes, he has his policies and everything, but if Ballotelli is chosen ahead of Osvaldo then discipline is definitely not the deciding factor.

And yea this sort of thing happens quite often, it just depends on what the media decides to do with it if the rumors come out. That being said, it's an inexcusable action and deserving of the fine he received. The suspension is debatable, but I agree with it as well.

That explains the hair.

I agree with Checa. Once they have apologized to each other, a fine is more than sufficient. If at you insist on suspension, keep it down to 1 match.

If anything, this might improve their chemistry on the pitch. Just think of this as an eyes-breaking session.

Lamela reportedly said to Osvaldo: "Shut your mouth, you're not Maradona"

highburied wrote:This sounds like a good rule of communication of strikers with midfielders.

bhends wrote:Lamela reportedly said to Osvaldo: "Shut your mouth, you're not Maradona"

No reason to get angry there, Osvaldo is not really near Mardanoa's stratosphere, he in not eve near Maradona's shoes. Unless Osvaldo really thought of himself as near Maradona's level, he shouldn't have punched the guy in the face.

I can only imagine him going like this: "Shut up Lamela I am sure as shitz Maradano, waaaaaah"

Osvaldo bought dinner for the whole team tonight (Lamela included), it's all in the past thankfully.