Brilliant video, shows how much work Pep has put into this team.
Also I am really happy that Allas is back again 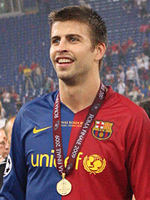 Great video, thanks for sharing!

Great video. Guess Pep is an average coach who only has good players and so on.

On topic, the video missess out a couple of important things:

In attack:
Doesn't mention Barças primary way of creating space for goals which is that the "wingers" start the attacking build up wide, and usually cut inside making a movement behind the defence, or between the FB and CB and this also gives space to Alves in the wings. If wings always sticked up wide as they usually did in most other teams, it would be difficult to create space with zonal markings.

In defence: He explained very well Barça's pressing, but he didn't show the defence work when this press is surpassed that is fantastic. When the opponent surpasses Barça pressing, this usually means a counterattacking options, and we've seen that Barcelona usually retreats to then use the offside trap and press again, solving many dangerous situations. When Puyol is not playing, this is so much less used and less effective.

Great video there of fundementally what is happening, but I dont think it was anything we didnt know.

More depth would of been great, the movement of Pedro and Villa and what that does for the fullbacks.

Our defence line, what happens when they press and when they back off, when they use the offside line and so on.

But a good fundementa video.

I like the music that this guy puts in his videos a lot.

Also, why does he keep changing accounts?? Makes no sense.

@free_cat wrote:I like the music that this guy puts in his videos a lot.

Also, why does he keep changing accounts?? Makes no sense.

His videos get taken down for copyright infringement, yet he keeps uploading them, so he eventually gets banned.

wow good stuff, wish someone could do this for more of the top clubs

Giggity5313 wrote:wow good stuff, wish someone could do this for more of the top clubs

Easy, here it is for Madrid:

Attacking tactics:
Shoot the ball very long and look for an opposition mistake.

Defence:
Put 10 men before the ball and kick at any opposition player that is near.

That was only against Barca though.

mtfootball wrote:That was only against Barca though.

The defence part yea, although they are one of the most hard tacklers in the league.

The attacking part, well, Madrid has played hoof the ball most of the season.

I dont 100% agree Madrid having been doing long ball all season, I would say they were direct, but not always high and long in the air.

But what I wanted to say is, I think doing one on Madrid would be harder.

Reason is, when I watch them, I dont see particular patterns, I dont see certain "pet moves" between the entire team or a group of players.

Hoof the ball? It's been counter-attacks mostly.