CJ will be a nice piece. He's proven he still has value as a decent player for a good team. He should never be the man.

Great Leader Sprucenuce wrote:Helluva take through one mid series against a top 5 defense being guarded by a DPOY finalist after playing for this team for less than 25 games.

Besides your acting like we're relying on CJ being an all star to go anywhere, if things go as plan he's the 3rd option with a bunch of good role players behind him.

we'll see how far that gets you

that one's for the refs!
c*nts

Is this the "SECOND HALF LOOKED LIKE '96 BULLS" "Never seen a defense like this before!" "did you know they hide Robert Williams off ball so he can play help defense" Celtics team I keep hearing about?

Refs were absolutely fucking us hard all day and it was still an easy win. Tatum and Brown will play better and I expect this to be a close series, but it was men against boys out there today. I expect us to get better too, we were sloppy as hell at times, but that's pretty much par for the course.

I want the goddamn brooms out. Lets go Bucks. NBA champs dead and buried by a lot of people before the goddamn series lmao. Like I said, it will be a close series, we definitely very well could lose, but the disrespect, gtfo

has there ever been a bigger mid-peak career drop off from a star player in NBA history than James Harden?

dude went from blasphemously being called better than Stephen Curry by the blind and stuff such as being one of the best offensive players the game has ever seen... to this?

to put it into perspective, just little over a year ago he played what i deemed to be his best basketball ever for the Nets as more of a point guard. But now it just seems like the dude caught the Ben Simmons bug out of nowhere. Doesn't look confident at all in himself.

Pivotal game 4 tonight in MKE. If Boston win it you have to give them the upper hand with home court advantage in a best of 3.

If MKE win it, you have to think the series is probably over. 3-1's can certainly be come back from, but it's hard to expect that Boston can keep Giannis from clinching the series in 3 straight games (+ can they shoot well enough for 3 straight games to pull off the comeback?).

well deserved he was unreal this season
It's a bit disappointing for Embiid, his case was very as best scorer of the season. Given his injury record i don't think we'll see another full season at such dominating level, while Jokic is more durable. My vote was Embiid to reward this narrative, but Jokic and Giannis deserved it too. There was no clear winner in my opinion.

Absolute smash and grab from the bucks. Complete collapse by Boston and Jrue Holiday wow. Makes up for last game in a huge way. Still would like him to shoot better but importantly 4/7 from 3 including a huge tying shot, and then completely sealed the game almost singlehandedly. Incredible.

Stealing that one in Boston feels unreal. Let's bring it home in 6

Why is White's underwhelming ass ahead of Pritchard in the rotation? At least Pritchard is a microwave scorer.

said the Suns remind me of the DeRozan Raptors and man laughed at me on here.

incredible how much i continue to give my analysis and takes with so much conviction and i turn out to be right most of the time.

what a terrible choke by the Suns, 27-57 at half time is unacceptable, the type of choke that should make them reconsider their plans for short time future 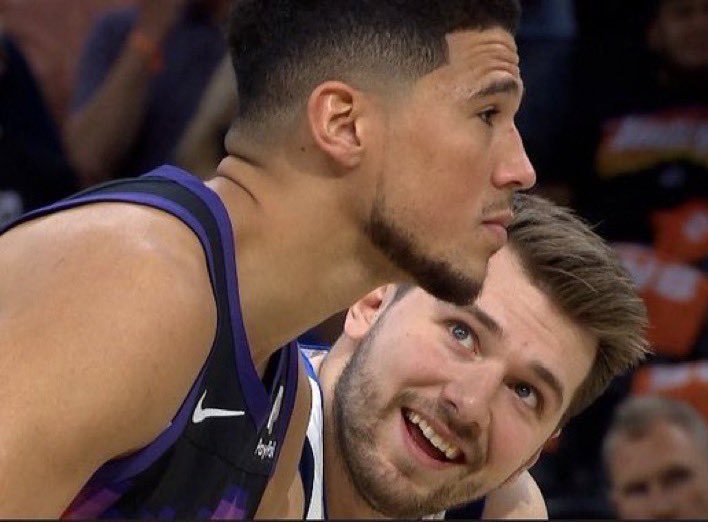 @Art i'm so happy man lmao. Those Suns were getting wayyyy toooo cocky for a team that achieved absolutely nothing in my eyes.

@Freeza big facts, i tweeted something similar earlier in the series.

@Warrior i think they definitely won't (and in all honesty shouldn't) give Ayton the max now and he will test free agency to see what he gets. Let's also remind ourselves the Suns picked Ayton over Luka, so a bit of poeticness to that to. Clock struck midnight on his 37 year old flopping ass and Christopher Paullicious is pretty much cooked now, so please i do not want to see anymore MVP and "point god" talks when it comes to this all-time playoff bum. Suns should enter their name into the Donovan Mitchell and Zach Lavine sweepstakes i guess.

Draymond more interested in his media career than actually stringing together strong consistent games these days.

Getting lots of 2019 Finals vibes from this series. Boston - young, lengthy, athletic and most importantly hitting their 3pt shots.

To make things worse, Steph who has been carrying his team so far this series might at the very least be debilitated now moving forward.

What a strange final. Both teams are switching on and off, Warriors have more quality shooters but they cannot take control, their x factor Poole is in the misery except in game 2 when he caught fire for a short while. Thompson can also do much more, in fact both these guys need to score 20+

And overall i found the playoffs disappointing this year i think 75% of the games i seen were blowouts and most series could be predicted easily. I've not felt much of that extra entertainment as in 2019 or 2021 maybe it's just a matter of narratives. If anything the regular season was more interesting to follow because of fantasy.

interesting, maybe it's just you because viewership numbers are highest it's been since 2019.

but yea the amount of blowouts are kinda weird, and i don't know what to pin that on.

As for Poole and Klay, they are defensive liabilities and they cannot offset that with their offensive production so far this series. Boston have great all-round three pointing scoring production across their team though, and they're coming up bigger than Klay, Poole and Wiggins atm in that regard.

Warriors now belong in the greatest dynasties of all time, what we just saw is amazing and historic. They have the best management in the league, in retrospect they were always one step ahead of the poor situation they were in. The Wiggins trade in particular was a mastermind move.

seems like you and me are the lone survivors of GL NBA, @Warrior

NBA Player Power Rankings (after 2022 season, list based on accumulated player performance over the past few seasons)

Once Lakers, Pelicans, Bucks are eliminated this thread is dead

Is this your own ranking or an official list based on advanced stats etc ?
For me Giannis is the best, followed by Jokic and LeBron. AD is also a top 20 player better than Kawhi or Paul George who also barely play.

my list... but i try to be as objective as possible. Curry scoring champ last season as well as 3rd in MVP voting, and carried the Warriors to this championship. I really can't see how someone can't have him number 1. Giannis I'll understand because he also had a great Finals last season, but Curry's accolades are more impressive over the past two seasons, and of course even more obviously so as recently as this season.

Curry's impact to winning and how much he makes players around him better is second to none since the 2010s. I've been saying for a while now he is the best player since Jordan. Some people dismissively laugh at me for that. But i see more and more people slowly awakening to that reality across the internet. People try to place this sort of untouchable icon-hood on players such as LeBron and Kobe, and for good reason, but they do so to the extent that it's wild for them to conceive that Curry's greatness is right up there alongside theirs, and perhaps even better.

AD has barely played these past few season, can't take his fragile ass serious. And this season when he played Lakers were just as trash, he didn't make much of a difference. I trust Kawhi and George more than AD in terms of durability and top level execution. AD is soft and beta.

You're right about Kawhi i tend to forget how good he is. I don't rate Paul George that high though, he's overrated imo

The very elite players have widely different skills, Giannis is the best defender, Curry is the best shooter, Jokic is the best at nothing or so it seems but somehow every play results in a bucket. Who do rate #1 depends on your preference or what you perceive to be the most important aspect of the game.

I rate height and physicality equally as shooting and playmaking if the result is to generate 40+ pts each game through scoring, playmaking, spacing with at least acceptable defense. Against who do you defend and attack is also an important factor and then i generally rate bigs > guards. Regardless of advanced stats and accolades i think it's more impressive and harder to dominate against Horford and Williams than to dominate against Smart (just using the most recent example)

i get what you are trying to say with this (dominating vs bigs is better for you vs dominating vs guards)... but this also just makes me think you didn't watch or study all of the finals games in full. There are multiple ways to dominate. One of the most popular stories from this finals was how Celtics chose not to blitz Curry, and he completely rinsed Horford and Williams in the pick n roll.

Today at 5:33 am by BarrileteCosmico

Yesterday at 9:11 pm by futbol_bill

Yesterday at 10:49 am by Casciavit