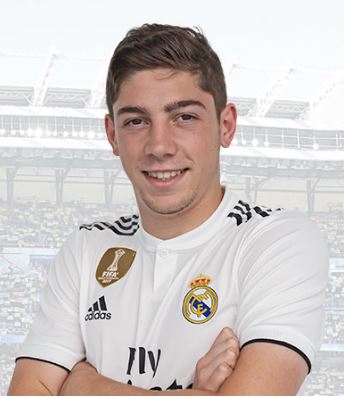 I guess that is our midfield signing. If only we got a CB.

With the little he played today as a LAM he has proved to me more than Llorente or Ceballos have in all their appearances. This kid has more potential than Kroos. Fact.

Hes everything I want Kroos to be and more and he's my favorite and the best youngster we have. Mind-blowing midfield talent we have on our hands.

I need a new sig

He looked good, but let's not get ahead of ourselves, for once

@Thimmy wrote:He looked good, but let's not get ahead of ourselves, for once

He did the basics right apart from that I don't know what did he show to deserve this wankfest.

@The Madrid One wrote:With the little he played today as a LAM he has proved to me more than Llorente or Ceballos have in all their appearances. This kid has more potential than Kroos. Fact.

He looked good, MTO, but let's not go overboard.

Your comparison to Llorente and Ceballos is invalid as all three play different roles.
Llorente is the DM, while Ceballos is a backup to Modric and you are right re Llorente the backup to Kroos. Ceballos has been playing really well this year.

It's pretty well accepted here that this squad has to many kids. Lopetequi has no confidence at all in Vallejo and Llorente. Only out of duress has he played Odriozola and Reguilion. And he has been very limiting to both  Vinicius and Fede. I believe Vinicius, Fede and Odriozola deserve more playing time, but like Zidane last year in these desperate times, you can't really blame the coach for wanting to stay with more experienced players. If Flo had done his job and brought in the players requested by Lopetequi (a central, a midfielder and LB as well as a "scorer"), then Llorente, Vallejo and Reguilion wouldn't be on this team and perhaps even Fede and Vinicius.

As it stands now, Lopetequi will probably not be here after Christmas, and a new coach may get that scorer but the kids will still be here and the new coach will probably restrict their playing time even more.

So we are left until next summer, and we have to wait and see what Flo will do. Don't hold your breath!

I honestly feel bad for Lope Bill... he left a great job with Spain NT for this... wonder if he was misled. Hope not.

@sportsczy wrote:I honestly feel bad for Lope Bill... he left a great job with Spain NT for this...  wonder if he was misled.  Hope not.

Yeah, me too. His coming to Madrid cost us greatly re world cup and being essentially a rookie club coach, he had no clout with Flo.

what I can’t understand is how things have gone so bad when they looked so good earlier. What I see missing is the team press, the creativity and shots being taken from all over the place. these elements were first and foremost when they played well, and have literally disappeared. For this I blame the players!

When I look at this season, I blame

1. Flo - for total lack of signings. I don’t blame him for signing Vinicius, Rodrygo nor for not signing someone for 200M with what was available. But he is at fault for not signing a proven scorer, a central, a LB and a midfielder. With those changes the squad wouldn’t be burden with too many youngsters and would have resulted in less dependence on Benz and Bale.

2. Blame the vets on team for not buying into the team press, the team defense and the unpredicability of where shots will come from that is an important element to Lopetequi’s change of tiki taca.

3. Lopetequi for not making adjustments.

So yes, we can feel sorry for Lopetequi. He went from being a promising  coach that managed to change the predicable Spanish possession game to a finished coaching career in less than 6 months.

I made another post talking about how difficult it is for vets to buy into something new like high press. These are not spring chickens, in your thirties athletes rely on force of habit. Hard to pick up something new and exhausting like high press, especially as they've had some success without it.

Momentous occasion, Valverde with his first start today. The beginning of a new era.

He is the chosen one. He will bring balance to the force, or in our case, to our midfield. Mark my god damn words.

edit: oh wait, the imbeciles at Marca gave the wrong line-up, Valverde isn't starting at all.

You can see he has a good engine when he runs, showed some ice cool quick one touches when under pressure, put a good pass that set the third goal in motion, literally was inches away from scoring a goal in the last second of the game, his passing looked sharp, and he launched a good cross-field long ball that was not easy.

Also, there was this one almost volley long ball that he tried to do, shows how confident he is with his abilities to even try it (i've seen it come off before).

I had some free time and was bored today, so I made an Avant-Garde video of Fede Vs Melilla.

Here's a nice article on Fede, the kid who at 3 years old impressed football scouts and who garnered his "Pajarito" nickname after he reportedly celebrated a goal by taking off his diaper.

Apparently gained fame in the dressing room after he dared nutmeg Zidane in training.

Also, that video i created, i created a video that explores new unexplored territory in the soccer compilations field. Bah gawd.

Fantastic footballer this guy, an A on both ends

He was so good yesterday I fapped thrice watching him play .

@Adit wrote:He was so good yesterday I fapped thrice watching him play .

I must change my avatar and sjg but need copyrights from this TMO goat scout. This kid is the new Marcelo

Eh, Fede was just as bad as everyone else yesterday.

vanDEEZ wrote:Eh, Fede was just as bad as everyone else yesterday.

He shows a lot of energy and confidence at times, but yeah, I agree with you that he made just as many mistakes as the average player on that team, and we weren't playing against a particularly strong team by any means. One of his misplaced, lobbed passes even lead to one of their counter-attacks against us. I can't tell whether you guy's kneejerking is legit or trolling, sometimes

@Valkyrja wrote:I must change my avatar and sjg but need copyrights from this TMO goat scout. This kid is the new Marcelo

@The Madrid One wrote:

@Valkyrja wrote:I must change my avatar and sjg but need copyrights from this TMO goat scout. This kid is the new Marcelo

Did you make the music yourself?

No, I edited loops of a song called "See You Don't Bump His Head" as i saw fit.

There was a certain feeling i wanted to transmit, i got lazy and the vid is not as realized as it could be but it does have some messages intact.

@The Madrid One wrote:

@Adit wrote:He was so good yesterday I fapped thrice watching him play .


I was being sarcastic fyi

Page 1 of 3
Permissions in this forum:
You cannot reply to topics in this forum
Latest topics
» The Official Real Madrid 21-22 Match Day Thread

Today at 5:44 pm by BarrileteCosmico

Today at 5:20 pm by BarrileteCosmico

Today at 8:53 am by LeVersacci