UC4 is my GOTY but OW was ridiculously fun

Yeah I did, it was fun all right but don't see how that won over a masterpiece like UC4.

Haven't played UC4 but OW is a fantastic game. Really should get back to casually playing it, I've heard some of the new changes are pretty fun. Was playing a bit of the 3v3 the other day and Sombra is fun.

Yeah I did, it was fun all right but don't see how that won over a masterpiece like UC4.

It's a masterpiece in it's own right imo, just in a completely different way.

Also in fairness it's more recent in memory than UC4 was and i played it a shit tonne.

You all making me wanna play UC4

Is it great? I haven't read a single review or anything, I was staying out of gaming until I got a PS4. I loved 1-3, some of my favorite PS3 games. Was looking for a UC4 PS4 bundle but there wasn't any around here.

I think I'll buy it after FFXV.

Yes it's great, i can say that much lol.

Finally a normal time where i don't have to kill myself, especially with TLC the following day lol. 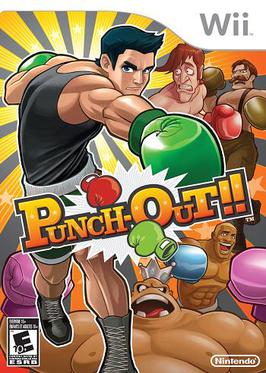 In a time that games were becoming more complex, and every other game seemed to have some RPG elements strewn in, an exact replica of a 20 year old game sounded like a bad idea. Making a Punch-Out!! game that does very little to update the decades old formula could have failed.

Yet, it is a testament to the work of Next Level games, and the great quality and originality of the Punch-Out!! formula that it manages to be so entertaining.

"Now kid. It's time to show the world that you got what it takes to be a champ"

Like Super Punch-Out before it, Punch-Out Wii is simply a remake of the original NES game. Coached by the ever expanding Doc Louis, Little Mac goes on a quest to get the World Boxing championship belt.

Except, this is an obviously disorganized championship. If not, how can you explain the great disparity in Weight classes, illegal moves, and all around ridiculous behavior going in the ring. To get that belt, Little Mac must fight his way through 13 varied characters, of which only one is probably in his weight class.

The game is not really about Little Mac though. He is simply a suitable avatar that allows you to face off against the real stars of the show. Each of the 13 characters you face is larger than life. Ranging from the Over-the-top to the ridiculous, these fighters say it all in the way they move, the way they talk, and the way they fight.

Glass Joe's prime weakness is obvious from his jittery form and his obvious high guard. It tells you of the shame and tension he must face, having only won once in the ring. Super Macho Man in contrast oozes confidence, with his oily body literally taunting you with his every move.

12 of these characters are simple updates of their NES and SNES versions. Which has great nostalgic value, but its and unfortunate lost opportunity. I say that because the new addition, Disco Kid, is just very well-done, and fits in with the crazy cast with his Disco movements and Disco smile. It makes me want to see more of Next Level's ideas.

"It takes two to flamenco baby!"

The only update to the Punch-Out gameplay formula is adding two optional control schemes. Both use some form of motion control, and they are not as good as the traditional control method, especially given the degree of precision needed in this game.

Basically, you can choose between right and left punches, and you can direct them high or low. To evade opponent's attacks, just pick the appropriate directional input. These are all the limited inputs you need.

It's simply not a real boxing game. Its a tactical match, based on identifying opponent tells, anticipating their attack, dancing around them, and going back to punish their opening. In that way, it has the spirit of boxing, if not the mechanics.

Matches are designed to be lost, because that's a learning opportunity. You must learn what each enemy vocal and visual cue means, so that you can counter or evade. There isn't really any game like it. More a puzzle game than a fighting game, it still needs split second reflexes and serious memorization to excel.

"Hard work pays off kid, and there ain't no harder worker than you"

Since this is more like a puzzle game, each match is more or less permanently solved once you figure out how to beat you opponent. While there are special challenges to prove your mastery, and there is always a better record to break, the game does seem to consist of only 13 fights.

Of course, that doesn't mean you are going to finish this quickly. While these 13 fights can technically be completed in under an hour, the average player would probably spend more time getting their face punched out than the other way around.

Except, the game doesn't end when you get the championship belt. That's when the second half starts.

Each of the 13 fighters now want to get a chance at that belt, and they have trained for it. In Title Defense mode, its the 13 fights again, but an already difficult game just become more difficult. Even Glass Joe himself has a chance to beat you now.

It adds another dimension to the characters as well. Their frustration at being beaten against the odds, and how they changed their style to beat you. Glass Joe wears a head guard now, and King Hippo duct tape a manhole cover over his belly button.

The game didn't need Title Defense mode, but its inclusion cements it as the best Punch-Out for me. Not only because it increased the length of the game, but because it forced you to re-work how you defeated those fighters before.

"Tell your face to leave my fists alone"

Since Next Level Games did not update the mechanics of the game, nor did they add much to it besides Title Defense mode, transferring the game to the Wii was all about the graphics.

To showcase the crazy character of the cast, nothing other than the cell-shaded style used in the game could have worked. It allowed the devs to make a cartoonish and highly expressive style that wonderfully translated the NES and SNES sprites into full fledged 3D models.

Seriously, the graphics look great on those characters. Obviously, with no need to work on backgrounds, effects, buildings, or really anything but these 13 characters, Next Level Games managed to craft them to the tiniest of details. This also supports the gameplay, since clear visual cues are part of the game.

Audio cues are important as well. On the Wii, this allowed the devs to have full VA for the boxers. There isn't any dialogue though, they just trash talk, taunt, and express delight at defeating you, or dismay at losing. In an excellent touch, each fighter talks in their native tongue. We might not understand half of what they are saying, but that ads to their crazy character, even if its not as funny as Piston Honda muttering random Japanese cultural items before the fight.

Other than the sounds, we get a pretty good soundtrack, with a theme for each fighter. These are all good tunes, updated from the originals and with a little more flourish.

Punch-Out!! on the Wii, like Super Punch-Out!!, is not one of the best games in the system. There are games that are more expansive, more varied, and simply larger in scope. Punch-Out is too limited to ever be seriously considered among the best games of the generation.

Yet, it does what it does very well, almost perfecting its unique gameplay. In doing that, it is also presenting a great cast of crazy character, in such funny and well realized artistic style. Punch-Out is a game that doesn't aim to be anything but a game, and that is super fine.

1- Observe what your opponent is doing, and learn what each tell means.
2- Sometimes, the enemy repeat their patterns, this means you should prepare a patters to your counters.
3- The most efficient strategy is to counter punch the enemy's attack's, you stop them and get a star point.
4- Star punches are the best way to get a KO.
5- When the opponent is down, mash the 1 and 2 buttons to recover some health.
6- If you get TKOs, you might be able to recover if you mash the 1 and 2 buttons (once per match).
7- Between rounds, press the (-) button to recover some health (once per match).

Like with Super Punch-Out!!, I don't think this game will be in my top 10 games for the Wii. Ironically, it might score more than a couple of games in that list in my own rating scale. That's because Punch-Out!! is such a unique series that does what it does to perfection, even if what it does is somewhat limited in scope.

Next game, at #20, is a game that is anything but limited in scope, Red Steel 2 tries to use the Motion Control of the Wii to do a hundred things at once. While the original Red Steel game failed because of that, the sequel apparently succeeds.

PS experience tomorrow or in 10 mins?

Poor lads never learn, place is incredibly entertaining before a press conference though.

FROM aren't even there lad

it's a sony property though, they could just show a trailer