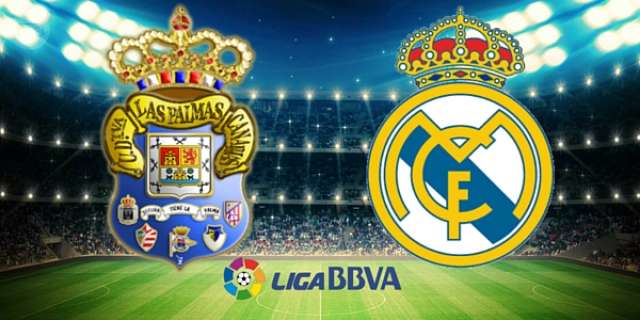 September 24, 2016 • 19:45 • Estadio de Gran Canaria, Las Palmas de Gran Canaria
Not going to lie, I'm extremely disappointed we drew Villarreal at home and missed a golden opportunity to go five points clear at the top of the table. I already said after the Sporting and Espanyol games that if we kept playing like this, it was just a matter of time before we start dropping points. I also said that set-pieces and individual brilliance can only take you so far, and if you're going to rely solely on them and go into games with no game plan, sooner or later you'll drop points. I also added that I don't mind playing unattractive football if that's what it takes to win games, especially against the big sides in the league. But when you play unattractive football and on top of that end up not winning? Then we have a problem.

The thing is, there's a difference, a big difference, between playing like, excuse my french, crap while still having a game plan and playing like crap without one. We, unfortunately, fall under the second category. The fact that we're unable to dominate teams even at home and regardless of their caliber shows that we have a serious problem. The fact that we're unable to string three passes in a row without losing possession and crumble to the slightest form of pressing shows there's something deeply flawed with our approach.

A team of this quality should at least be able to recycle possession accordingly and reach the opposition's final third regularly. No matter how you spin it, there's no excuse for our dreadful performances against Sporting, Espanyol and Villarreal. None.

Z is thought to be a great motivator, but I don't think that's necessarily true. The spark he brought when he took over seems to be slowly but steadily fading away now with the team looking to grow more disinterested with every game passing. We have no drive whatsoever, and we always, always seem to have this sick compulsion to wait until we concede before we start taking games seriously. Maybe he's not a great motivator after all, and what we perceived as "team spirit" may very well be a mere temporary excitement shown by players every time a new coach arrives. Of course one can only speculate at this point, and Z, depending on the outcome of the games lying ahead, might turn out to be the great motivator he's thought to be. We'll see.

Next in line are Las Palmas and Dortmund; arguably the two toughest fixtures before the Madrid derby in November. Z must, and I truly mean MUST, not drop any more points from now until then. He said in the Villarreal post-game conference that, and I quote, "Real Madrid can't always win in the last minute" and "Let's think about the next game and think about changing things, especially at the beginning of the meetings. We lacked intensity". Well, I hope you do sir, because Real Madrid are getting used to fighting back in the second half after a poor showing in the first. It’s a worrying trend. It happened against Celta, against Sporting last week and again against Villarreal. We didn’t even register a first half shot on goal. So you better take care of that or you won't last very long.

1. Case: Fracture to the central third of left fibula; ruled out for three weeks.
2. Marcelo: his medical report will be published tomorrow, but he's expected to miss up to two weeks.
3. Navas: return date still unknown.

Jeez didn't know Casemiro was out for that long ffs

This is a must win game. Can't afford any defensive mishaps. Think we play the same line up as we did when Marcelo got supped with the exception of Pepe who will probably come in for Varane
_________________

In Spain they say 1-2 months for Casemiro.

The need for someone who can defend in midfield is blatantly obvious.

Pepe is out for Las Palmas, according to Marca.

1. Navas has been included in the squad to face Las Palmas. It remains to be seen, however, whether he'll play or not.

2. Real Madrid have confirmed Case will be out for 1-2 months, and Marcelo for 2 weeks.

3. Pepe has not been included in the squad to face Las Palmas. He's likely going to be rested for the Dortmund game.

Casemiro being out means that our fullbacks will play very conservatively since Kroos is likely going to play the regista position.

So Casemiro's replacement is going to be one of Kova/James/Isco... likely James.  It's very important that Modric and this player have a big impact on the attack.  It's also EXTREMELY important that both Bale and Ronaldo take wide positions like they're supposed to because the fullbacks are going to the have to stay back.

As far as motivation... this is how records fall.  It has nothing to do with motivation.  Feeling invincible and cocky is human nature when you win so many games in a row.  You can't say Zidane is not a good motivator when we haven't lost a game since March of last season ffs. That's like saying Pep isn't that great a tactician because Barca's similar run was halted 4-5 years ago. It's football.
_________________

I don't think with the way we have been playing any of our players felt invincible. We have been playing mediocre football without dominating, even at home, and on multiple occasions we came very close to losing. That's hardly something to be cocky about.

Your theory is more plausible for Guardiola's Barça because they were smashing everybody left and right all while dominating possession and camping in the opposition's half.

We, on the other hand, were barely winning and couldn't even recycle possession against the likes of Espanyol and Sporting.

That's a complete myth. Go back and look at the game logs... Barca were not smashing everyone at all.

What is it with this false mythology about Barca and Pep with the newer generation of Real Madrid fans? It's unbelievable.
_________________

Are you seriously going to stand there and say with a straight face that Z's Madrid is as good as Pep's Barça?

This is worse than Moyes saying that United are looking up to Pool.

@The Demon of Carthage wrote:Are you seriously going to stand there and say with a straight face that Z's Madrid is as good as Pep's Barça?

No one said that.

If he didn't imply that then I apologize in advance for misunderstanding him.

Still, I believe his theory, or to put it more bluntly excuse, for dropping points against Villarreal at home is implausible.

I don't even understand why he thinks some of our guys would even dare to be cocky. It's not like we have been putting one world class performance after another and cutting through teams like a knife through butter. It's the complete opposite actually. We have been playing below par ever since the season started and we have struggled to beat our opponents, even the weakest ones among them, and even at home; usually through a mere set-piece goal in the last minute.

Villarreal was no different to the Sporting or Espanyol showing; it's just that this time around set-pieces and individual brilliance couldn't bail us out. We dropped points the second we met a half-decent team. That's all there's to it, and that's the definition of a flat track bully.

The good news is, it's still too early and we still have time to turn things around.

I think it is absurd that consecutive win record is counted by media over two seasons. We had only won 4 La Liga games consecutively. What does last season games have anything to do with continuity? The record is just bs.

Making a record in a single season is what matters. Counting it over two seasons is misleading.
_________________
#WEAREALLTAXFRAUDS

likely line up will be

Was looking at Las Palmas and they haven't lost a match at home since last season. 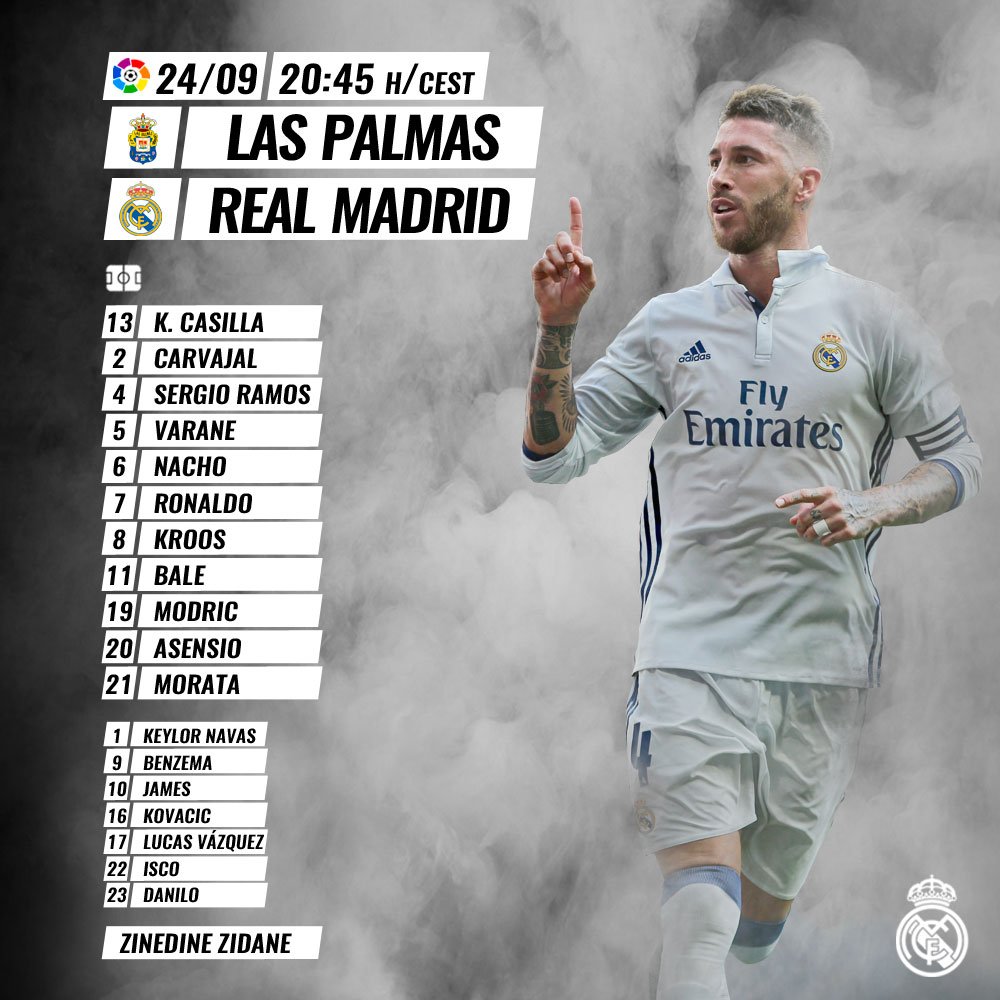 Not sure how we haven't scored yet

A lot of crap finishing by Ronaldo. Morata is a bit clumsy too, but he's doing a lot of other great things.

We've been playing very well with grit and incessant pressing, and Morata has done in 30 min what Benzema couldn't do in his lifetime (pressing, tracking back, making runs,...)

Now, I hope we keep playing like this and don't fall back to our own half.