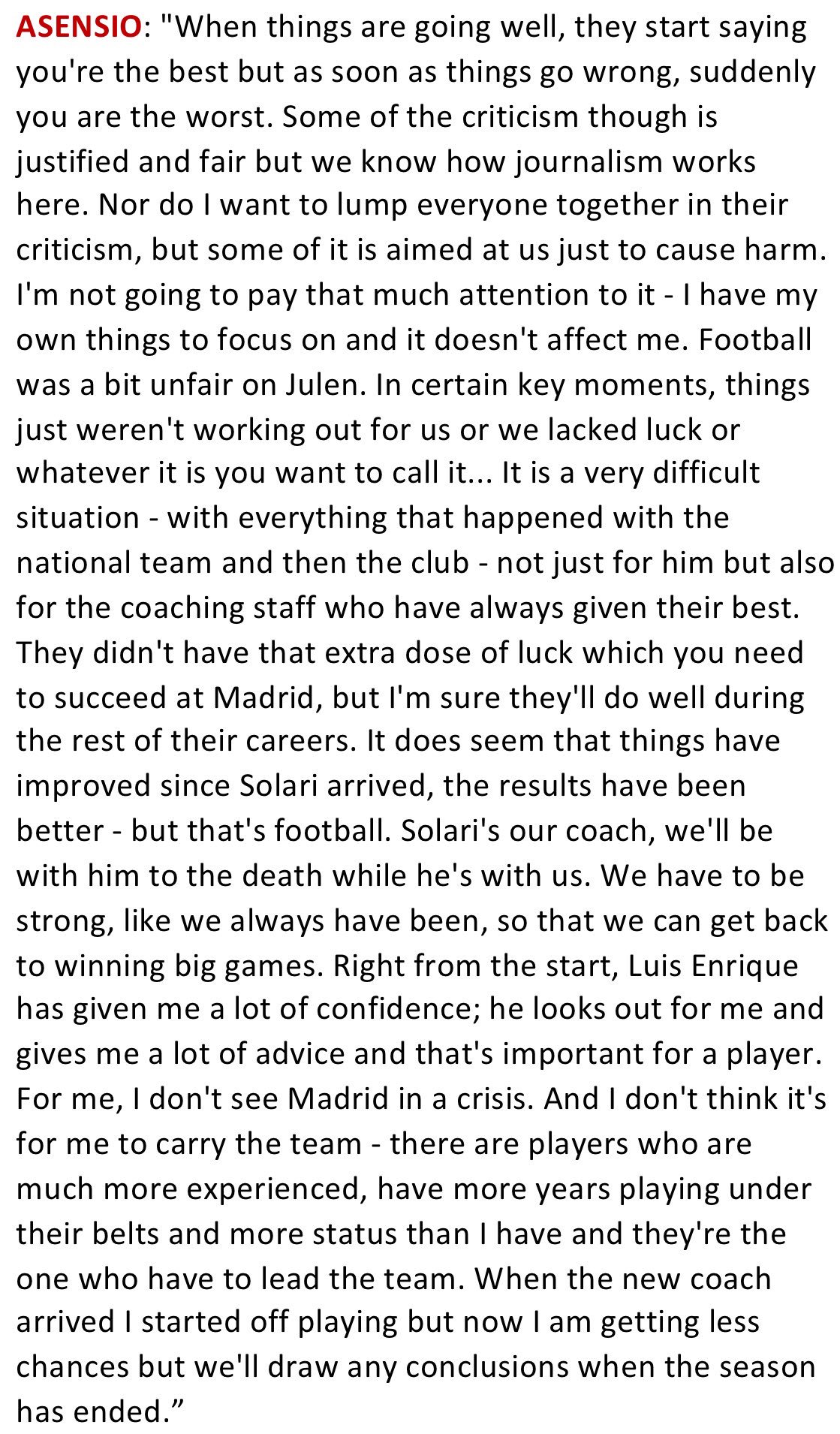 Full quote and quite frankly, I appreciate the honesty. Some men are leaders and relish the responsibility and some men prefer to be a supporting cast. Hope he finds the place where he can prosper.

Full quote and quite frankly, I appreciate the honesty. Some men are leaders and relish the responsibility and some men prefer to be a supporting cast. Hope he finds the place where he can prosper.

Even with full quote I'm still no impressed with his mentality. Like the answer is so damn easy I'm not sure why or how he could have messed it up.

If a reporter is asking how he can carry/help the team the answer should be along the lines of "I will continue to do my best/improve etc while helping my team in any way I can and listening to what Solari thinks is best.

He's got to own up to his performances and state that's going to keep working to improve. Like that's it.

Nothing wrong whatsoever with what he says, and it's not worth starting discussions over it unless you're hellbent on nitpicking and taking words out of context.

I'm sick and tired of the betas on this damn team. Since Ronaldo left, we basically have no rational alphas left on the team. Bale beta. Benz beta. Asensio ultra beta. Navas/court beta etc... Ramos and marcelo are the only alphas left and one of their IQ is considered a moronic state and the other doesn't even play the position he is put in.

Rational alphas, that is such an apt term. Love it and yeah, we are clearly lacking those.

@Hapless_Hans wrote:Nothing wrong whatsoever with what he says, and it's not worth starting discussions over it unless you're hellbent on nitpicking and taking words out of context.

Wanna talk about your grievances?

You should read the interview with Asensio that was in Marca today. He has clarified what he was saying and what was misrepresented (or interpreted). It kind of runs counter to a lot of what was in this thread. But he does essentially say he is being played at the wrong position. On the right or more central is what is the normal position for him.

It remains to be seen how he will flair the remainder of this season, but next season is going to be a difficult set of decisions for the club in terms of forwards.

While I'm ignoring the raft of rumours particularly regarding SA youth, there will be at least 9 players in competition for 6 or at most 7 positions. I'm assuming both Benz and Bale will be gone (but even there, nothing is certain). I do assume that the club will sign at least one, probably two new forwards so called super stars. And incoming will be Vinicius, Rodrygo, Odegaard to compete with the likes of Mariano, Lucas, Asensio and likely James.

It's possible that they will simply say Rodrygo or Vinicius or Odegaard are not yet ready, avoiding any drama, but no doubt the competition for our weakest area is about to get vert stiff.

I completely understand his issues with playing on the left, I've mentioned it quite a few times already. He still has to put in the effort, though. I'm not necessarily referring to his work rate, but what has looked like an unambitious mentality from what I've seen from him on quite a few occasions this season.

Maybe he's been instructed to play it safe, but in contrast to his performances from last season, he hasn't looked willing to stand out and be anywhere close to the player that the club and the fans expect him to be - and I believe this is the main reason why people jumped to conclusions when he seemed to shift responsibility to his seniors in that interview.

Even if he's not completely comfortable in his designated position, he's found himself in many situations this season where it absolutely wouldn't have mattered if he had taken a few risks, as opposed to passing the ball backwards and sideways. Based on the recent string of his performances, it's only natural to conclude that he's been relying on others to hopefully do the dirty work that needs to be done in order to break the deadlock. He clearly has a lot of talent, but he's been looking like a poor man's Toni Kroos (minus the ambidexterity) on the left this season. He may have been playing on the wrong wing, but I know he's still capable of more than the mediocrity he's been showing. Normally, you'd expect someone of his age to show more hunger than the senior players.

Tbh his best position is central bench. Hes more lethal as a super sub until I see otherwise.

His left foot is noteworthy enough that his teams apparently designate him as corner and free kick taker but in terms of his actual passing skill and variety, i believe i still haven't seen very high level examples.

As long as he garners and maintains good concepts of work ethic and player movement, i can see Marco maybe playing at Madrid some day (as he keeps evolving elsewhere), if not necessarily as an all an out elite starter.

He also seems to have noteworthy dribbling/ball handling, but it shouldnt be overestimated.

3 years later and little has changed

this years version of Lucas and Asensio have the worst decision making and final pass i have ever seen.

I think it's always been present in Lucas. Asensio has just looked awkward and uninspired since he was moved to the left wing.

@Mamad wrote:this years version of Lucas and Asensio have the worst decision making and final pass i have ever seen.

Asensio decision making is terrible because he has one foot. He is the most one footed player I have ever seen. And he doesn't have enough explosiveness to abuse it like robben or messi.. even those two use their right foot. Just look at dembele for example. 2 feet and Pace for days. there's no way defenders will know what he will do.

Dembele is completely two-footed though.  Believe it or not, he's actually a natural left footer. Point well made however. If you're going to be completely one-sided, you need to be dominant on that side to play at the highest level. And the fall off will be dramatic once you slow down imo.

Too bad he can't wake up on time though lol.

As Hala wrote, he just needs proper guidance. If he had proper leaders like Xavi and Puyol to look up to, he would have had a better time with integrating with the squad and I suppose waking up on time. Instead, he has not captain material like Pique, Suarez and Messi.

Yesterday at 11:07 pm by Robespierre

» Does Zidane have a problem with playing kids?

Yesterday at 5:28 pm by RealGunner

Yesterday at 4:47 pm by Cyborg

Yesterday at 3:58 pm by Myesyats

Yesterday at 3:20 pm by Lord Spencer

Yesterday at 1:31 pm by VivaStPauli

Yesterday at 11:57 am by BarcaLearning