The internationals have been played and the Premier League returns. For us it's not in very high spirits as we lost that top-4 six-pointer to Man United of all teams as our last match before the break.

However, here we have a chance to bounce back big time, should we manage to beat Arsenal at the Emirates. It's looking difficult, though, with Arsenal on a six-game winning streak in the league and us missing a few important players: Skrtel and Gerrard are suspended and Sturridge and Lallana are apparently injured.

Hoping Mignolet and Sterling are fit for this. Also Ibe is that far away from returning where is the source?

Think it will be a slow cagey game.

It all depends on who gets the first goal. If you get it, it's game on. If we get it, then it's our game no doubt.

Fully expect a extra highly motivated Liverpool to mess up our top 4 run. :/

I'm hoping for a good game. My buddies are coming over to watch the game at my place and they're all Arsenal fans. Would like to see a 4-3-1-2 or something like that.

I know its all grim here, But we need to get 3 points.
Do or Die.

Nishy wrote:I know its all grim here, But we need to get 3 points.
Do or Die.

Would have been a much better game had it not been for international break. I think both teams would be tired and scrappy game. 1-1 or 2-1 either way.

grab and smash ala Southampton away. No motivated shite or anything is going to help us..

Lets get excited ffs, Liverpool are playing after 2 weeks ffs.

I know we might have lost one of our biggest games this season, But this one is season defining as well. We were unbeaten for like 3 years before losing to United. GET IN THERE U BEAUTS

Arsenal will assess forward Danny Welbeck, who has a slight knee problem.

Mikel Arteta, Alex-Oxlade Chamberlain, Mathieu Debuchy and Abou Diaby won't play despite returning to training, but Jack Wilshere has not been ruled out.

Have no fkin clue how they will line up, So not giving too many *bleep* here.

Daniel Sturridge should return from a hip injury and Raheem Sterling has recovered from a toe problem, but Adam Lallana is a doubt with a groin injury.

This is where the shits at, This is where you walk towards when you enter a party with a friend and your friend walks away friend zoned with some chick leaving you stranded and alone, You go to this area ffs.

MigNOLETINGOLSNEMOAR
Kolo Sakho Lovren
Lallana/Markovic Lucas Henderson Moreno
Coutinho
Sterling Sturridge
Wing backs our latest problem right now, Moreno was a scrub last time he played there and Lallana's not fit, Neither is Flano nor is Ibe. So we have Manquillo, Gleninho and some dude called Markovic who didnt make the 16 man squad against United.

I think we should play Gleninho and Jose Enrique as them wingbacks, We'll win for sure. That's sorted then.

Lovren can't play center, He'll try to clear both Kolo's and Sakho's balls considering how rash he is. Probably try to mark Cazorla in the center while leaving Giroud alone upfront assuming he'll be able to catch up with him if they thread a pass to that model.

Coutinho will draw fouls in the center, So you can assume either of Gibbs or Ox will get sent off, Which one? idk

Lucas yellow card at the 15'th if he starts. Allen's was horrible last week, He can sit on the bench and recycle the balls that go out of play so that we can take throw ins faster.

Sterling might play safe and pass to both the teams equally. Its a home game for him so he'll be cool.

Sturridge consolation goal for sure, Its a big game and he's just back from injury. Put your money on this.

Sturridge, Gleninho and Henderson
Ozil scoring for them cuz he was invisible and no one saw him at the far post, so he got that easy tap in.

I can see any result but a win for us.

It's a pity because this is the most must win game of the season.

I just hope everybody steps up and proves me wrong. Need Markovic to come back into the fray and show his January form.

ffs, as the match start time is coming nearer, i m getting fulled with confidence that we will give them a tough one, even at Emirates. We will definitely play good but we just have to make sure that we manage to have that 1 goal lead and just come back home with 3 points.

Urgh, why this game had to be on Saturday? Going to miss it.

Let's win this, it's not that difficult. 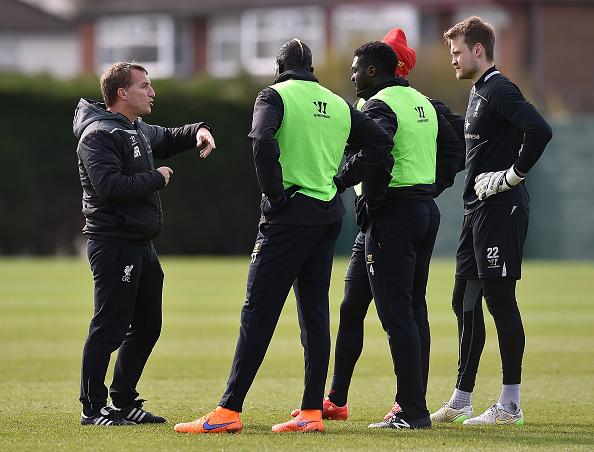 Can-Kolo-Sakho back three. At least no Lovren, lifting my spirits a bit.

Arsenal play more crunch crisp football than us but they aren't as aggressive as us in pressing, As long as our 2 man midfield doesn't get found out like last time.

Moreno doesn't deserve to be starting in his 2015 form. He had a shocker against United.

A big game for Lucas to show his worth in that defensive role. Markovic, too, needs to step it up and perform adequately.

I honestly don't know where his going with this one, looks like a 3 at the back is more likely with hendo next to cou and both behind sterling.

Liverpool haven't conceded a goal away from home in the Premier League for 649 mins.

No Premier League side has kept more clean sheets away from home this season than Liverpool (7).

This is WC. Obviously it'll change tonight but this is the progress we need.

He's playing for a 0-0 until the 60th or something then he'l try to smash and grab.

Wow *bleep* idiots *bleep* a goal and moreno and mig gift them goals.

Getting bent over here. My grandmother would put up a better fight than these lot of sorry ass footballers.

Moreno is so bad defensively. Has been at fault for both United goals and the Bellerin's goal today.