I'm getting excited and nervous, big time... Would be simply amazing to win tonight!! 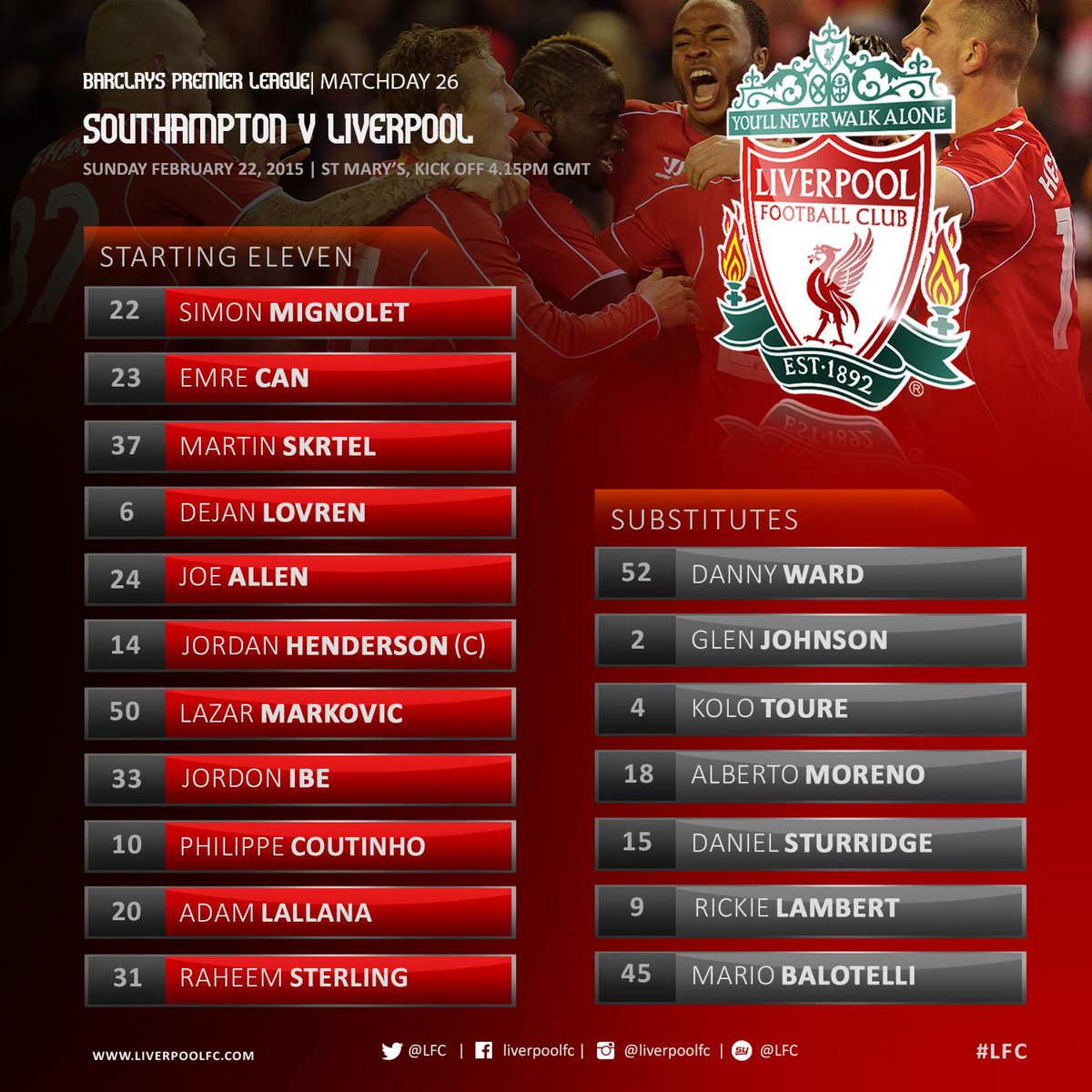 Also, is Sturridge fatigued after his injury or why is he on the bench? I know he didn't have a good game against Besiktas, but still, I would have started him, I mean, we've been dreaming of having him playing all season long...

But seriously, since Sakho seems to be injured I would have started Johnson or Toure ahead of Lovren.

If Sakho is injured or unfit, I don't mind. Rodgers could have spared Coutinho with all that changes. I would have preferred

Jesus Lovren is the wort footballer on the planet.

I've forgotten how bad he was.

Seriusly though we are lucky. The Allen tackle was a pen. But so was Sterling getting fouled. Djuricic dived for his, never a pen on that. And Lovren handball would have been harsh, but I've seen them given.

Southampton totally on top, but thanks to Coutinho's wonder strike we lead...

Allen has no effect, ever. Lallana isn't either here nor there. Sterling's been invisible. Markovic having almost a shocker. Lovren is shit, but that we knew already. Southampton hugely unlucky to not have given a penalty.

I'd take Markovic off and move Sterling to LWB, Sturridge up front. Would like to take Lovren off, too.

We're totally in the ropes here, unable to counter, unable to control. Would require a miracle for this 1 - 0 lead to hold. Brendan, what are your answers?

I think I am going to give up on Lovren. We need a sub there right now, otherwise we are surely going to concede

Oh man, what a win

Dat grit, dat steel! We are well and truly in the top-4 battle!

My observations from the match:

1. Sterling's goal shouldn't disguise the fact that he had a poor game. Didn't look like a center-forward... perhaps because he really isn't one?

2. Lallana shows good effort, but... Leaves a bit too much to be desired in this form.

3. Coutinho, what a shot

5. Mignolet with a good performance. Again

6. Skrtel and Henderson did great defensively.


Not exactly a great performance by us, but Coutinho's strike and our defense earned us a hugely important win

Didn't people think it was EXACTLY like the game there last season ?

They have all the control and chances in first half, where we get an early lead...then second half, we make a sub and score on the break as they tire out. It was like a carbon copy.

BR studied that Southampton struggled to open up Swansea/Westham parked buses and adjusted. Massive gamble, but now we got a very important away win, and Sturridge got his rest, and even Moreno (our most underrated layer imo) got half rest.

Credit to BR. The fraud wins yet another tactical battle

But worthless manager, terrible summer signings and all that.

Just teasing. Into the top 4 come on lads! Top 3 even since we still have Arsenal coming up.

I'm sure other than Albert, we're all more than happy that Rodgers is absolutely proving us all completely wrong.

that yellow box face at the back side is Albert, trying to hide somewhere and just look at the face of the poor fella !!
and on the right side of him is Marty, that bald beautiful Marty and you guess others

and that girl is RedO, he doesnt wanna join the party so he came in a girls costume

You could just tell that RA has a draft post saved on his computer....probably from 2 months ago. just waiting for a bad result to post it.

It's a great win, but let's not get over the moon, we've achieved nothing yet. I'd say we were outplayed today, but still managed to find a couple of goals and defend nicely. But there's still a lot of work to be done to make this season a successful one.

how can you make Art celebrate something, give him few shots

the biggest joke: Lovren starts and he also played as a sub in few games but we were still able to keep the clean sheet. Does it mean the formation is actually playing some part in it.

It looked like Sterling was really frustrated in the first half because he had absolutely no service available. He did try to hurry the defenders but he looked frustrated. He did improve when Studge came on. That just means we need more off the ball runners in the team and that is the reason we seem to function better when two strikers are playing for us.

Mignolet and Skrtel both man of the match.

Lovren, I have no idea when will he improve. He was a complete mess positionally in the first half. But he improved a bit in the second half and that certainly helped us.

Can was OK. Not playing to his standards and hype he had set for himself but still solid.

Moreno sub did help us. He seems to be a very tidy guy. I think his reading of the game has improved a lot in last few games. That was great to catch Schneiderlin to catch off guard for the goal

Markovic looked uncomfortable on the right side.

Ibe looks good again, even defensively. The trajectory has just one way, up, up and up.

Allen, should keep his place for City game and please dont introduce Gerrard now in this line up, use him as a sub and those important FA cup games. Allen is playing very tidy imo. His position defensively is bad but you cant deal with it, at least he tries to run hard and do his work as he can. As said before, we and Allen will struggle whenever we do not have more share of possession compared to our opponent.

Henderson, having mixed games but I think he is just doing enough but I expect more. I still think his few of the passes could have been better in the last 2-3 games.

Sturridge, remember Sturridge is still not firing and we are still winning games. He seems like he had all this hype around him that we are missing him so so so much. So he is trying too much and making right decision few times, like being selfish on so many occasions.

Definitely need to improve our performance but the meanest defense of the league is out of the way, so we really managed a brilliant result, in Nish's words:WC performance for 3 points.

Art Morte wrote:It's a great win, but let's not get over the moon, we've achieved nothing yet. I'd say we were outplayed today, but still managed to find a couple of goals and defend nicely. But there's still a lot of work to be done to make this season a successful one.

This was our TACTICS. Keep it cagey and tight, let them have the ball, hit them on the break when they tire out later on and we bring Sturridge on.

And that's exactly how the game panned out. Meaning Rodgers won the tactical battle with Koeman.

Southampton are not great at scoring goals. Hence, Rodgers allows them to have the ball, draws them out, and we counter. our second goal.

If this was Mourinho' Chelsea performance, the whole world would be wanking now. This is precisely how they won that FAMOUS game at Etihad last season. and against us at Anfield.

And yep. We've achieved nothing so far this season. But neither have Barca/Real/Bayern. No team every achieves anything in February. May is when we will see what we , and every other team in the world has achieved.

Meanwhile, we can enjoy this upward trajectory we're on.