Just watched the trailer again and the biggest thing I noticed from this specific part of the game.

But they really have learnt a lot from TLOU. The open ended combat, the stealth and just the overall ability to engage the enemy how you want to.

Gameplay is miles above Uncharted 3, really can't wait for it. Especially striking was that part where he jumped off the cliff used the rope swung around to the next cliff kicked the bloke off, slid into the rifle and killed another enemy.

It was all so smooth, if you were to show anyone why they should buy it that would have been it absolutely fantastic.

Said the same yesterday. They took the successful elements from TLOU and put it in UC4 which is a good sign.

Can't wait for it ffs

The guy is everywhere $$$

Tbh the shooting looks the same as Uncharted 3. Was hoping to see some improvement in the shooting mechanics.

Can't wait for the next gen set pieces

I don't know what will top the golden trio of burning mansion/ship/plane from Uncharted 3 but I bolieve in Naughty Dog.

It looks the same but it seems to have a lot more punch and weigh to it IMO.

Agreed on set pieces, as promising as this gameplay was we still need dem crazy as shit set pieces that define Uncharted.

And I'm sure we will, Naughty Dog clearly know what the fans want. 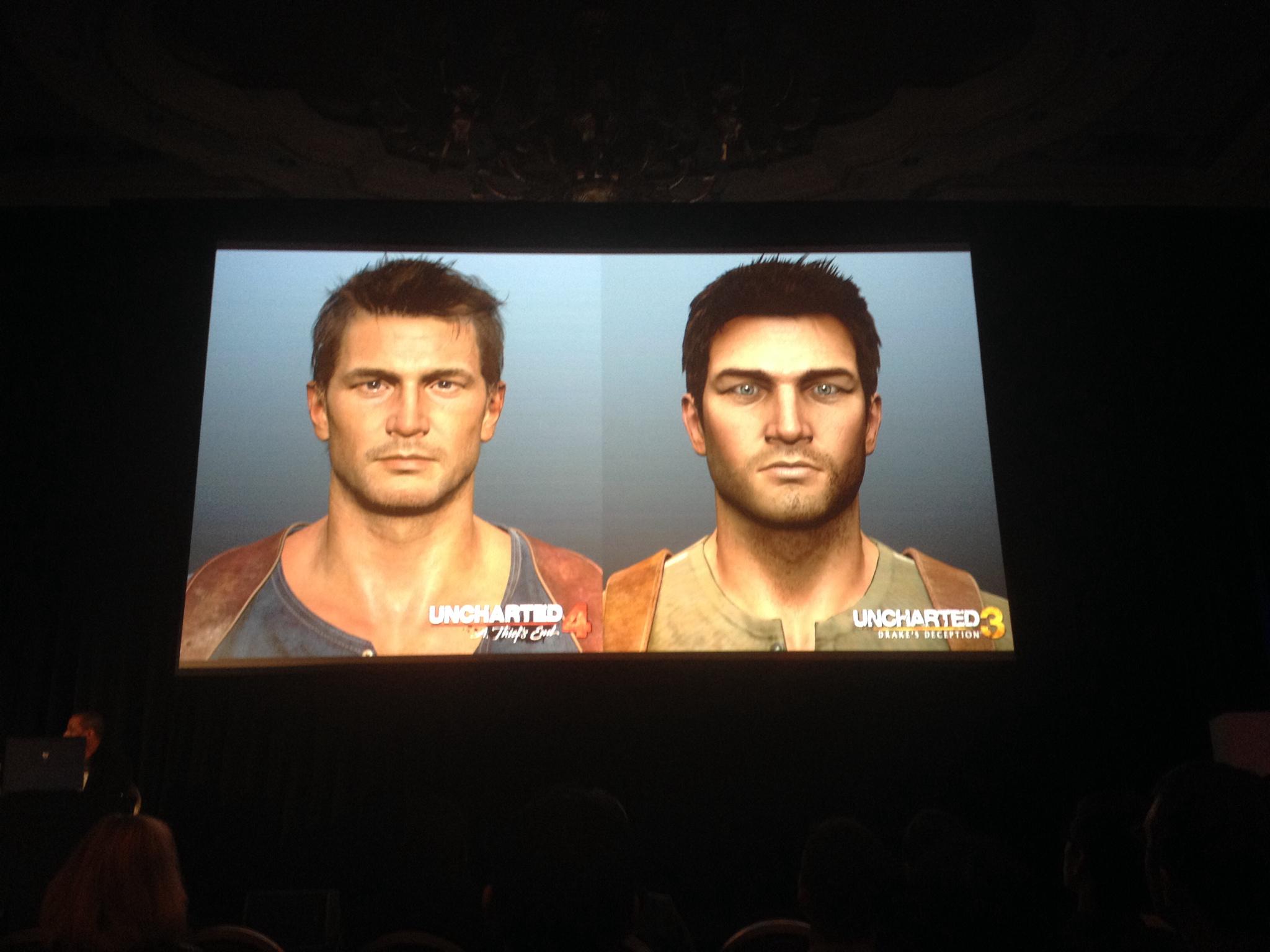 I'm like one of the only ones who feels this way but I loved the first uncharted but wasn't crazy about the sequels. I felt like when the sequels came out I expected the series to move into a certain direction but it moved into the opposite that I had hoped. I thought with uncharted two drake would get maybe more ways to traverse the environment, make the level design more vertical, different weapons and things to make each encounter more like your own personal sandbox. But they were nothing like that. The excitement was forced with set pieces and Each level was like a tunnel and the variety of ways to go about each encounter was shite. I ended up just hiding behind one piece of cover and shooting guys one by one as they stupidly decided to all toward me for like 90% of both games.

This looks much better. However I still have a bit of an issue with the tone.

Why so serious naughty dog? This series should be fun. And about having fun. Embrace the silliness of a cartoon Indiana jones spoof, which is what this is. Personally I think they care way to much about " the story of Nathan drake" and who is as a character. I don't give two craps about drake, his past or his dead ancestors. I care about going on a fun adventure. Tell a bunch of one liners, be a dashing ladies man, punch some dudes and have a laugh. Stop taking it so seriously. Because honeslty the more seriously this series takes its self the harder it is for me to suspend my belief that drake isn't a psychotic murderer. I start thinking too much about like, ok what are the reasons I'm killing all these dudes for.. Treasure? It doesn't work with a too serious tone.. Keep The Last of Us type stories and dark tones out of Uncharted please 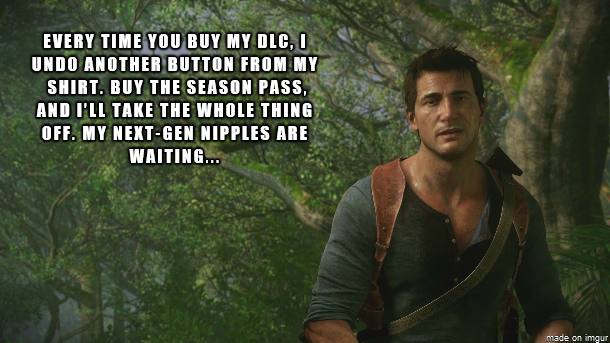 Wow! I just sat down and watched the gameplay trailer for the first time and I'm blown away. I haven't payed any attention to this series since I've been primarily an Xbox owner but I have to say I'm sure glad I bought a PS4 to play this gem of a game.

Question: Can you play the previous three games of the series via PSN?

Nah but there will be a remaster for the 3 games before 4th is out. Sony knows there's alot of 360 & Wii users that moved to PS4 and didn't play the old ones. Reason why they remastered Tlou aswell.

LeVersacci wrote:Nah but there will be a remaster for the 3 games before 4th is out. Sony knows there's alot of 360 & Wii users that moved to PS4 and didn't play the old ones. Reason why they remastered Tlou aswell.

I would't be so sure of that. As of right now the only way to play the original trilogy is on the ps3.

- Porting TLOU to PS4 helped Uncharted 4 development
- Small team working on it since U3 development ended, half the team moved to U4 after TLOU and the rest after Left Behind

Spoiler:
- Takes places 3 years after U3
- At the start of U4 Drake is living an happy life with Elena, then Sam appears
- Drake thought Sam was dead
- Sam life depends on him finding an artifact from Henry Avery
- Drake feels indebted of his brother and he can't resist getting back on treasure hunting
- Story takes Drake and Sam to Libertalia "a mythic Madagascar colony purportedly founded by pirates"

- Says you're not going to spend the whole game on the island, teases snowy and urban enviroments

- Villains will play a bigger role this time

Spoiler:
- "The lack of Sam being in Nathan life for so long is what's driven him in the last games"
- Sam is five years older than Drake
- Teases Elena and Sully
- Sam is even more reckless than Drake
- Sam is jealous of Drake, sees him as the 'better at everything little brother'
- Lots of rivalry between them
- ND didn't want to talk about Drake and Sam past

Spoiler:
- GI saw an extended demo with a new scene. Drake is beaten down while Sam is rested, they start arguing the existance of Avery secret, then something catches Drake's eye, he moves forward, pull some foliage, revealing a gray monument with a carving.

- Focusing on navigational freedom for this entry
- Showed multiple paths, one finding an extra cave, other bypassing a group of enemies
- Plenty of side stories if you're looking for them
- In the demo they showed Drake taking a more riskier climbing route, that almost makes him fall in the sea
- All paths have consequences, there's no "Golden path"
- Rehauled A.I system
- Compared Sam A.I to Ellie, but says Sam is a grown up treasure hunter, so he's much stronger than Ellie
- Trying to "explore what it's like to be with somebody as capable of Nathan Drake"
- Not giving a straight answer if this is Drake last adventure
- Still plenty of humour in the game
-There are 60 different animations just of Drake picking up objects.
-Talk a lot about how weight distribution plays a big role in the animations
-You can attack enemies from all sides with unique animations to them, you wont magically warp in front of them if you punch.

Spoiler:
-Lots of talk from Druckman on the cost of adventuring on Drake's life, it will be a major focus of the story. Compares his addiction to treasure hunting to a drug addict.

-All the new items they added were chosen cause it can help keep the pacing and gives you a better sense of exploration and adventure.
-Cutscenes are now all real time
-Tools will be used to enhance traversal and puzzle solving
They said the large puzzle rooms from Uncharted 3 will still be there, they say U3 had the best puzzles of the series and they want to build on that.
-TLOU moments where the characters react to what they see or read will happen in this game.
-Lots of talk about brotherly banter and building a bond between the NPC and the player, "there are some nice cooperative moments between Nate and his brother."
-On the gigantic setpieces, this is exactly what they say "So now our concept of a set piece is 'what's something impactful we can do to switch expectations and how can we have it emotionally charged?' We want to constantly surprise the player, so it can be really intimate, or really big and bombastic."

Lots of spoilers, everyone is spoiler tagged read at your own risk.

too many spoilers in there ffs

Why I spoiler tagged it lol, but you make a good point.

Thought it was spoilered because it was a big post lol.

Nah not gonna read any of that.

I just spoiler tagged everything story based in there if you want to read the gameplay and other stuff.

60 different animations for picking up an object

What a time to be alive

Are they trying to make Drake look like Federer or has he looked like him all along?

Looks a little bit like Nathan Drake from that angle.