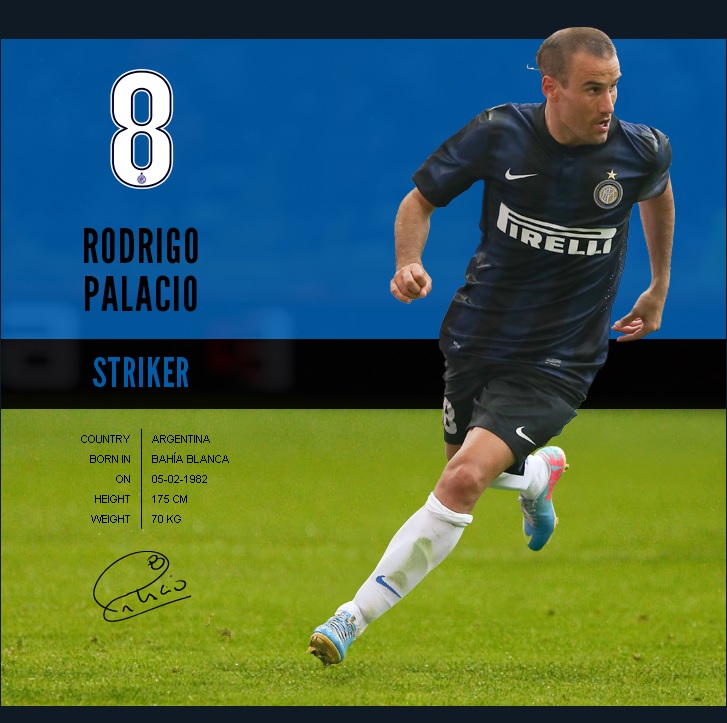 very underrated player...
He would be top scores now if we don't consider penalties

he has scored similar goals since he plays in Italy

And he is still better than CARRIZO

Rodrigo Palacio has revealed that he is in talks to put pen to paper on a new contract with Inter.

The 31-year-old is currently tied to the Nerazzurri until June 2015, but the Argentine admitted that he could extend his deal in the coming weeks.

“My agent is talking to the club,” the Argentine told Sky Sport.

Palacio joined Inter from Genoa in 2012 for €10.5 million. This season the former Boca Juniors player has really impressed by scoring 9 goals in 15 matches for the Beneamata.

“I’m doing well at the moment,” he added. “I’m happy on a personal level, but the most important thing is that Inter win games.

“Of course the draws have slowed our progress, and we’ve often been pegged back after taking the lead, but now it’s time for us to start winning again, taking each game as it comes.

“I still think we’re having a great season. I don’t know how far we can go but we must aim as high as possible.

“We know there are lots of strong teams around. All we can do is keep pushing on.”

He'll be 33 at the end of his current deal. Why are we doing the same mistakes over and over again ?

That's not the Inter way and you know that.We respect our senior players and renew their contracts with higher wages.

Then when they decline,we ostracize them from the first team,cancel their twitter accounts,make their life in Milan as uncomfortable as possible,and after failing to force them out we pay the severance fee of the same value we extended the contract for,instead of them leaving for free the year before.

such an underrated player

I LOVE the Argentinian strikers 30 years old from Genoa

Will sign a new contract before the end of the season. One year extension with an option for a 2nd, pay increased to 3m net.

Rodrigo Palacio revealed he has “renewed the contract with Inter, so I have another two years left.”

The forward spoke to Radio La Red in Argentina and broke the news on his deal with the Nerazzurri, which is currently set to expire in June 2015.

“I have renewed the contract with Inter, so I have another two years left to run now. Then we’ll have to see how I am and if I’ll have the opportunity to play for Boca,” said the 32-year-old.

“Years ago Julio Falconi called and wanted me to come back to Boca, but it would’ve been impossible. I had a contract with Genoa and I couldn’t just leave.”

Palacio has scored 12 goals in 27 Serie A games this season and with this form should be in Argentina’s World Cup squad.

“To play another World Cup would be a reward for all the sacrifices I am making. Now that I am older, I can make the most of this opportunity.

“We can really do something in this World Cup, as the squad is united and with many players who can make the difference."

He 's just renewed his contract for another year, until 2016

the difference of communication and media impact between Thohir and Moratti was visible from the start....
the changeover was already visible since officialization of Nemanja Vidic , through the twitter account.
Before if we want to know official news  we had to wait too long time  for a bland statement on official site I am lazy to do it 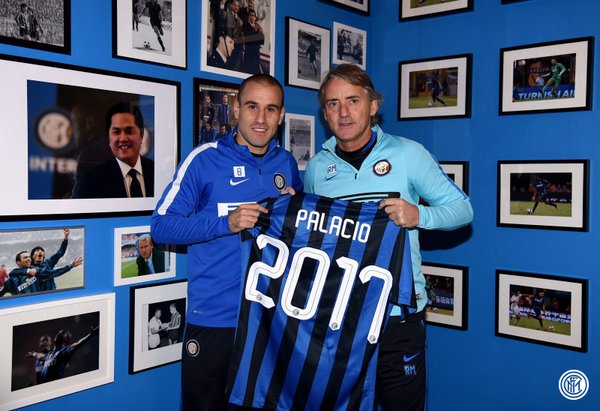 and what exactly did he do lately to deserve that renewal ? i guess every team needs a "forward" that tracks back..

This extension doesn't make sense on paper, while I was definitely glad for Handanovic's extension.
Simply we have no money for a back up and for this reason we keep Palacio