Since Suarez will miss the first game, do you think Uruguay will go with a lone striker (Cavani) or will be paired with Forlan!!!

Xifio wrote:hah, no bookie will take a bet on that any more ...

but I'd gladly make a friendly wager with you on here

My bet is not an XI as such. My position is simply that we don't know yet. You've taken your line-up straight from the Luxembourg game (except Barzagli in for Bonucci), but I think variations from that XI are inevitable, especially given the result in that game.

We don't know if Prandelli will start 3 forwards or 2, and in turn, we don't know whether there will be 3 midfielders or 4.

Anyway, I'll have a guess just for the sake of it:

Why not Ciro Immobile instead of Balotelli? From what I read he was pretty good recently in the NT.

rwo power wrote:Why not Ciro Immobile instead of Balotelli? From what I read he was pretty good recently in the NT.

Immobile was good in the last friendly vs Fluminense, but Balotelli has experience at the highest level against top teams... like Germany.

Forza wrote:Immobile was good in the last friendly vs Fluminense, but Balotelli has experience at the highest level against top teams... like Germany.

Well, first you have to get rid of the scrubs, Germany comes later

Forza wrote:You've taken your line-up straight from the Luxembourg game (except Barzagli in for Bonucci)

if you notice, the XI in my post that I quoted [for continuity] was one I put up *before* the Luxembourg game -- Bonucci replacing Barzagli was a last-minute precautionary move by Prandelli that day ...

A 4-4-1-1 might be on the cards with Insigne behind Balotelli. Midfield of Marchisio, DDR, Pirlo and Candreva

But if Verratti is fit then the same formation that was used against Luxemburg. Sadly that means that Italys attacking theart only comes though Balotelli and Candreva.

Personally i'd consider bringing Insigne on at the 65 minute mark to run at an exhausted England in the jungle humidity. A player like Insigne is the last player you want to see coming on fresh when you're absolutely exhausted.

we will play with only a CF, it seems evident.
Agree about Insigne with Tom

I think if Insigne starts it will be like this:

Immobile - Balotelli
Insigne
Marchisio ------ Pirlo
De Rossi
MDS - Chiellini - Barzagli - Abate
Buffon
The alternative is Cassano, who I think will be used as a super-sub.

Prandelli knows England will be coming storming out at full speed in the beginning. Alot of running. Less tactics. (typical England really)

So i dont think Prandelli will play Insigne like you guys are predicting. I think he will use the more defensive formation 4-1-3-1-1. With Balotelli as lone striker and 5 midfielders consisting of Pirlo, Veratti, De Rossi, Marchisio and Candreva.

Marchisio and Candreva in more attacking roles when attacking.

So, when the english sprinters are finished with their running he will introduce players like Insigne and Cassano.

And i hope it will work to perfection. 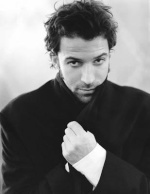 Well, I don't think you can say that we know the starting XI for Italy yet either because it is dependant on the formation.

what are you guys talking about? the starting XI has been the worst kept secret: 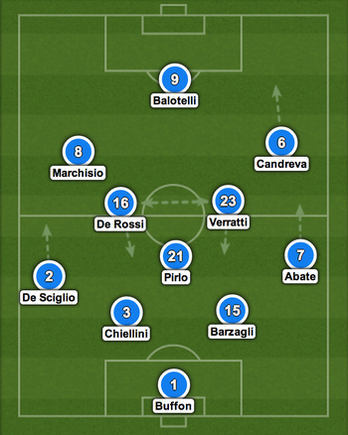 Verratti and Pirlo in the same XI? what's not to like ...

only one change in the XI, which is Darmian for Abate: 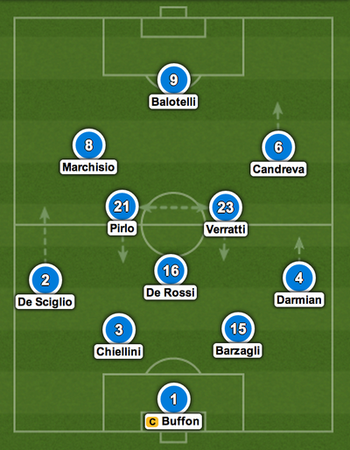 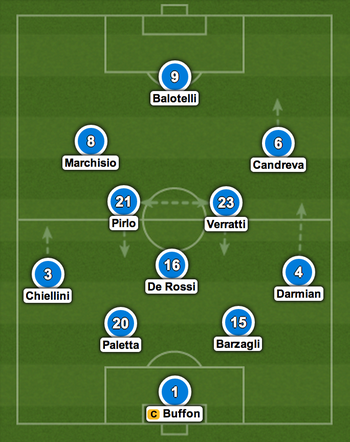 the great MDS out

I'd rather have Abate on the right and Darmian on the left. Why put in a makeshift center back when you've got a full back on the bench. Irrespective of how well Chiellini performs at lb, I don't think it is good for his conditioning, as he is arguably our best center back and we'd need him at top form if we have any intention of going deep.

the worst Italy defence ever seen

I think they are the worst individually, but collectively they are not bad.

loool it has to be better than our 2010 defense?

Honestly Abate is so fracking error prone and shit that I'd rather not see him on at all.

My issue is though, if we're going to do Chiellini LB and Darmian RB, then why even bring Abate? Why not bring.. oh I don't know, Criscito?

I've been very busy lately so I haven't been able to contribute to this thread as much as I'd like in the past month, so I'll briefly comment on some of the recent issues before getting to the England game.

I personally feel that Rossi's exclusion was perhaps the bravest call Prandelli has made yet and it's one he should have been supported in. Prandelli has been Rossi's biggest champion in recent times and pledged to wait until the last moment for him to prove himself. Prandelli was more eagre than anyone else to take him and if he decided that he couldn't justify his selection then that speaks volumes in my eyes. It is a shame for him that he has missed out, however one I personally feel we can deal with.

In midfield, whilst Parolo may not be a champion, I think that his inclusion is justified in terms of the balance he gives, even if he lacks a little in quality compared to the other illustrious names around him. Marchisio aside however, no one else provides physical dynamism and I believe it was important, particularly in such harsh conditions, to have such an option to throw on. The rest of the midfield is very one paced, at the very least Parolo offers something different to work with and in any case, he's a fringe option. We won in 2006 with Barone on the bench, he's certainly no worse than he was.

In defence, I was most disappointed to see Criscito miss the cut entirely, such a cruel blow after the Euros. As zarola mentioned, it appears even more frustrating now that De Sciglio is ruled out against England. Taking three fullbacks, all of them committed to the right but only one to the left was a frustrating risk and it creates huge dilemmas going into our first match, however there's no point crying over spilt milk.

Chiellini has shown himself to be a very capable option on the left, however whilst he is perfect to deal with a wide player such as Mueller, against someone such as Sterling his lack of pace may become an issue. He is however a very experienced campaigner now and given the fairly relaxed refereeing we have seen thus far, he should be able to meet the challenge. The option of sending Darmian to the left is an intriguing one, but it is certainly far from ideal to give a player of limited experience their major tournament debut out of position.

Whilst our defensive setup may not be ideal going into the first match however, it's important to remember that we once started Dossena against Brazil.

This can't possible be worse.

As far as our line-up is concerned, the possibility of three forwards has never been one I have considered Prandelli likely to use except in emergencies, such as when recovering the two goal lead against Brazil in Geneva. The issue then is whether Prandelli starts one or two true forwards. The ideal set up remains Balotelli-Cassano for the international experience, chemistry and balance they bring, however as has been mentioned, Cassano's ability to last 90 minutes is questionable. It would have been ideal to use him as a super-sub, however given the absences of El Shaarawy and Rossi, I believe it's important to hit England with our best team from the start. Should Cassano fade, I would restrict him to appearances from the bench afterwards, however I think a strong start is essential. Insigne and Cerci represent decent options from the bench to potentially change the game, even if they are not ideal for their lack of experience.

I think the 4-3-2-1 with Candreva is the most likely outcome though as has previously been expressed in this thread. I personally think that Candreva is a perfectly capable player for a side such as Lazio, he is flexible, hard working and is in many ways a jack of all trades in attack, however a comparative lack of vision, decision making and technique in comparison with our other options makes me reticent to field him from the start. Italy were able to field players such as Camoranesi who justified their presence as much through their work ethic as their offensive contribution due to the presence of immense creative talents such as Totti in the past. In the absence of a creative fulcrum in the final third, we risk becoming predictable. We also become far more dependent upon our midfield to provide goals should we play with a lone striker, an area where we've struggled of late.

I personally think this first game will finish 1-1, however a win could be crucial. It would certainly give us security as far as qualification goes, though given that we can never do things the easy way, that's likely to go down to the wire in any case.

I think they are the worst individually, but collectively they are not bad.

yes I meant this

@zarola, 2010 is a case apart.  another manager wouldn't have called 90%of names, not only defence.... in this case these are the better defenders for us, we can discuss just about Ranocchia but it doesn't change the situation

the defensive situation has only been getting worse and worse in calcio ... that there's a spillover into la nazionale isn't a surprise, and we've been seeing it for a few years now ...

Forza wrote:
Well, I don't think you can say that we know the starting XI for Italy yet either because it is dependant on the formation.

what are you guys talking about? the starting XI has been the worst kept secret:

Verratti and Pirlo in the same XI? what's not to like ...

only one change in the XI, which is Darmian for Abate:

the great MDS out

another ****ing injury, this time to the mighty Gigi ... at least Sirigu is available to start instead ...

Forza wrote:@Xifio: that is but one of several possibilities. If you want to put a bet on that formation being used with those players for Italy's 1st game, take it to the betting thread and I'll happily wager against it.

hah, what say you now?

Forza wrote:@Xifio: that is but one of several possibilities. If you want to put a bet on that formation being used with those players for Italy's 1st game, take it to the betting thread and I'll happily wager against it.

hah, what say you now?

Should have taken it to the betting thread.

Darmian is the FREAKING AWESOME. LOVE him.
Candreva did well as well too!
Overall we played well.... I mean, I complain and complain about Paletta, but he was very poor at times and okay at other times, like maybe he'll do okay, I've seen worse

Today at 1:27 by Great Leader Sprucenuce

Yesterday at 5:57 by El Gunner

Yesterday at 5:39 by Firenze