Di Natale = Super Sub. I'm not including Cassano because nobody knows if he'll be back in time for the Championships or not. The Bonucci/Barzagli partnership has proven to be the best in Serie A, they gel very well together and I see no reason why they shouldn't line up together for la Nazionale 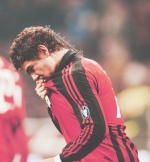 Buffon could last another 4 years lol

But Sirigu will grow so much, he will be one of the best keepers in the world soon.

yeah, sirigu is gonna be top 3 in 5 years 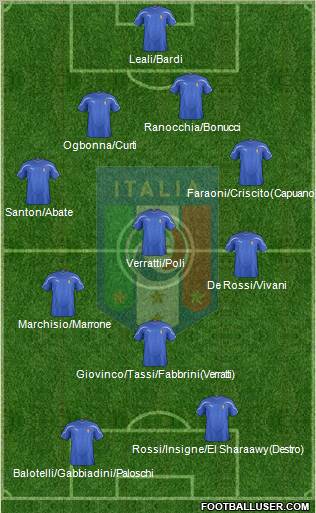 As you can see from this formation, these are all the possibilities of what we can see for the future, but of course this is a fantasy, this is not reality. However something of this sort should come out. We all know there's new talent coming out and there's more talent now that can fit in here, but I just chose the best possibilites.

You may see some of the old guard for the future, like Giovinco, Marchisio, De Rossi and Rossi. Well right now if you look at it, at 2016... All three Giovinco, Marchisio and Rossi will be close to 30 years old... at an age where they can be at their best and they won't be that old. As for De Rossi, he's a player your going to need even at the age of 32/33... thats why I have him in the future. 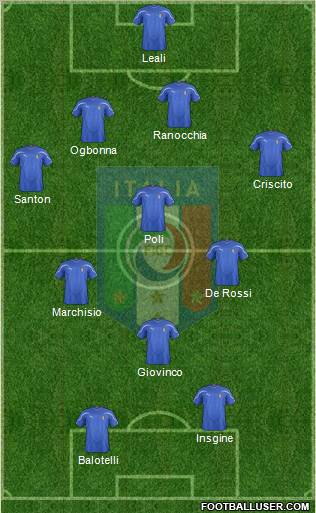 This would be ideally my first line up. We have many upcoming Trequartista to chose from, and strikers, very hard to chose.

Leali - Is Italy's number 1 prospect... Hier of Buffon... Was scouted by the likes of Barcelona and has joined Juventus

Santon - Has already done it all, both the U21 and Senior level in many occasions. Captain of the U21 side, stopped the likes of Ronaldo and Eto'o and is being called the next Maldini. Amazing performance with New Castle.

Ogbonna - Being valued at 20 million, is a Serie B player actually playing for the senior National team. Very fast player as well.

Ranocchia - Proclaimed the next Nesta, has already proven himself both with Inter and the national team. Had one one of the best defensive records in Serie A a while back with Bari. Very dangerous at set pieces, scores a lot of goals.

Criscito - Was part of the 2010 world cup and is growing to being a very promising player, best player against the World Champions Spain back in August.

Poli - Being compared to Andrea Poli, has amazing playmaking abilities is one of Italy's best youngest Regista's. Proved himself with Sampdoria and will hopefully get his chance with Inter.

Giovinco - One of Italy's best playmakers and dribbler. Has tremendous speed and could be Italy's best.

Insigne - Growing sensation in Italian football, scored 19 goals with Foggia, and now has 10 goals with Pescara. A player with amazing technical abilites and skill. Will be superior to Rossi and is compared to the likes of Lavezzi

Balotelli - Italy's best U20 player this decade, Italy's best striker since Baggio as in technical skills. Has won it all, plays with the biggest clubs in the World... and has experienced almost all. Future Ballon D'or contendor and maybe winner. Close to World Class and one the up coming biggest players for the future. 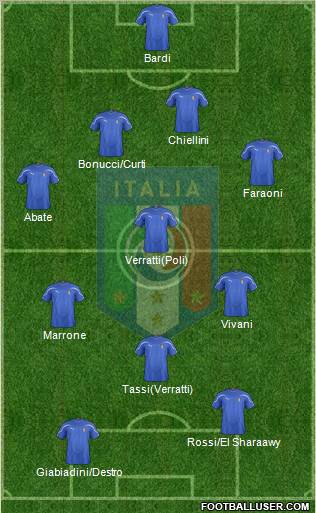 Bardi - Plays with the U21, owned by Inter. Great keeper and has a lot of potential for the future. Amazing at penalties. Of course there's Pinsoglio one of my personal favorites, but this guy surpasses him, Pinsoglio can't even get a started role in Pescara.

Abate - Late bloomer, had a great season last season and finally got his chance. Not better than Santon, but someone for the future. Amazing speed and great defending.

Bonucci - Just like Ranocchia, except featured in the World Cup, valued close to 15m bought by Juventus. Someone to look for in the future as well...

Chiellini - One of the best today, in the future, he won't be used as a starter... great experience and will be a great role model for the rest

Verratti - Italy's most prized possesion being compared to Francesco Totti, Andrea Pirlo, Riva. A player who can play in the Trequartista or Regista role. Has tremendous playmaking skills and dribbling skills. Someone the future will hold for sure.

Marrone - Another promising player, developing with Juve and the U21 squad. Has potential and is showing it with Italy right now.

Tassi - Being compared to Roberto Baggio, is known for is his playmaking abilities. Inter signed him from Brescia. Can play as a TQ or SS.

Vivani - If you know nothing about Roma, it won't be explained.

Rossi - Still 25 years old, has a little more than 5 years in him to show his qualities. Was in the form of his life last season and was one of our best and surely will be in the upcoming years up until 2016

Giabbiadini - Has 10 goals in 13 games for the U21 squad, only 4 players have scored more than 10 goals and he's one of them. At 6"1", he has great atheltic abilities and speed for his hieght, compared to Bobo Vieri.

mr.galliani wrote:But Sirigu will grow so much, he will be one of the best keepers in the world soon.

And thanks for the videos Tony

Two goals and won a penalty against Lazio *bleep*

Simone Calvano - Well rounded, box-to-box CM. Currently out of action due to a knee injury

Marco Fossati - A classic no.10 playmaker. Always looks for the pass and is a very selfless player

Only Verdi has potential in the names you mentioned.

Donnaruma is not even in the top 5 best keepers Italy currently posses within their youth prospects.

Fossatti? He's just good, nothing special to be honest. Fabbrini, Verratti, Tassi, El Shaarawy and Insgine all surpass him nonetheless.

Calvano? A fake version of Marchisio

I don't see much in Calvano either, but how can you say Fabbrini is better than Fossatti? Fabbrini has done nothing in the last 20 months to suggest he will ever become a protagonist at even the smallest teams in Serie A....

mr.galliani wrote:I don't see much in Calvano either, but how can you say Fabbrini is better than Fossatti? Fabbrini has done nothing in the last 20 months to suggest he will ever become a protagonist at even the smallest teams in Serie A....

Oh is that so? Then explain to me why he was mentioned to be one of the most watched prospects this season before it even started? Explain to me how he already wore the U21 captain wrist band, and how they relate to him at their Trequartista... Explain to me his performances in the Europa League recently.. not to mention his class performances with Empoli which made a name for himself... Ferrara said it himself how important he is to the squad due to his technical and playmaking abilities.

Let's watch how he does with the U21 shall we?

Sadly Fossatti hasn't played in any FIGC squad since September

Oddly enough you can find player profile's like this on Fabbrini, and yet nothing on Fossatti...? Wierd indeed.

With Sirigu, Balzaretti, P. Cannavaro, Bonucci, Criscito, Aquilani, Nocerino, Giaccherini, Pepe, Balotelli, Pazzini and one ofeither El Shaarawy, Marrone, or Poli on the bench, unless Cassano gets healthy in which case he would get the last spot on the bench.

^So we should drop Montolivo who's been consistently in our starting 11 and playing decently for players that don't have one cap yet? Don't see that happening.

Take out Rannochia..put in Barzagli
Take out Montolivo & put in De Rossi

I honestly dont know what is special about Ranochia

He is a very slow defender and his quality does not warrant a start for Italian NT,

Adit wrote:I honestly dont know what is special about Ranochia

He is a very slow defender and his quality does not warrant a start for Italian NT,

anyway this is how I would go given injuries

Idk it's hard to say for our forward line. Regardless, this is who I would choose for 23 man squad:

with a spot for rossi and cassano for IF they're fit.

cmon guys this thread needs a bit of waking up too loll, now that rossi is officially out of contention how would it look like now?

xx-xx
xx
Marchisio-Pirlo-De Rossi
Criscito-Chiellini-Barzagli-Maggio
Buffon
The rest is up in the air, I hope that Montolivo is not the starting trequartista.
Balotelli, Cassano, Giovinco, Borini and Quagliarella is who I would bring for the attack

De Ceglie should be considered...
He has been in great form...
He would work well beside Chiellini & Barzagli..

Does anyone remember about this kid?
He is really special...
I hope he doesn't turn out like Candreva...
Quality player that never got a real chance

(Osvaldo) the most in form Italian striker atm ?

Over the last couple of weeks, yes lol. Says a lot doesn't it?

(Osvaldo) the most in form Italian striker atm ?

Whats Osvaldo's stat line like lately? I know he has scored some recently

Today at 3:57 am by Great Leader Sprucenuce

Yesterday at 8:15 pm by futbol_bill

Yesterday at 2:21 pm by danyjr

Yesterday at 8:09 am by Firenze