I Have Mono wrote:

McLewis wrote:Report is out that Graham Zusi, Danny Williams, Alfredo Morales and Juan Agudelo were the 4 players cut from the team.

I don't think klinnsman had those players fly across the atlantic to cut them 5 days later. I think all the Germans are staying and getting capped.

US Squad for the Antigua & Barbados, Guatamala WCQs.

Big news that's been been all over is that Jozy Altidore didn't make the cut. Klinnsmann apparently didn't like his last 2 performances for USA, especially against Jamaica and so has decided to punish Jozy for that. If this was tactical, I'd be ok with it, but he's holding a bit of a grudge here and that's not all that fair to Jozy, who has been in good form for AZ.

That said, AZ's system and our system are incredibly different in that AZ's system plays to Jozy's strengths and qualities, allowing him to hold up play and bring his teammates into the action. There's less of that for the USA as he's forced to take defenders on face-to-face, which isn't his game. That's certainly a better reason for dropping him then simple " I don't like how you played the last game."

Also....kinda wanted to see Wondo given another chance, but Alan Gordon has been pretty good for SJ.

Let Bradley murder them with long balls just outside the box and let Dempsey clean up the one's that don't go in. Victory.

In all seriousness though....I'm not worried about midfield, but I'm not exactly excited about our depth at forward. I would of liked to see them call up Wondo again to compliment Gomez and Dempsey, or even Boyd. However, I personally wouldn't of called up Altidore either, he seems to be suffering from a case of the Adu's.

What a poor win against Antigua.....that pitch was shat, but we were much worse, getting outplayed for stretches at a time.

For Guatamala, Fabian Johnson is out sick so it'll probably be Castillo at LB. Eddie Johnson has to start this match.

2 goals for Dempsey , 1 for Bocanegra!

So they're now going for the final round of World Cup qfy next year???

Anyone get to see the Russia game today?

Better than the boring Germany-Netherlands game

I Have Mono
Starlet

If Bradley keeps this up he'll get some of the Anzhi money...lol

King of volleys and long shots this kid.

Michael Bradley on the recent turmoil in the U.S camp and the players that leaked info to the press about player uncertainty regarding Klinsmann: 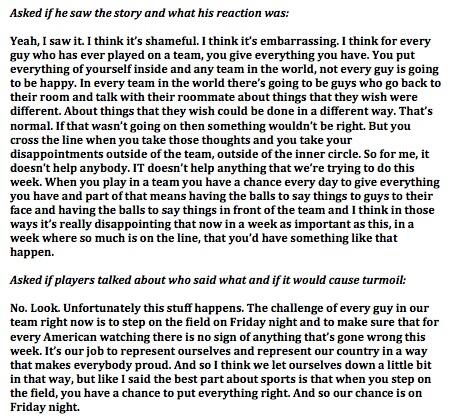 Not surprising, the dude is the future

Brilliant player and my favorite 'Murican next to Dempsey.

You would be the only one, not qualifying is impossible given how easy the qualification format is. If you finish fourth you face Oceania, and if you can't beat New Zealand you don't deserve to be in the World Cup. However, I kind of agree on your general sentiment that I don't think it will be pretty especially if Klinsmann has really lost the locker room so early in his stewardship of the team.

I still think he was the right choice for Sunil Galati's job, not the head coaching job of the USMNT.

Ok, true, but what if they don't finish fourth? I know it seems unlikely, but all the other teams in the group are very strong.

You really think we can't finish above Costa Rica, Honduras, and Jamaica? We will win all our home games except Mexico. Just need to not bleed points and lose leads away from home.

could be close tbh

Watch out for Joel campbell. Best Costa Rican player of all time

Motogp69 wrote:You really think we can't finish above Costa Rica, Honduras, and Jamaica? We will win all our home games except Mexico. Just need to not bleed points and lose leads away from home.

No, considering how 2/3 of those are some of the stronger teams in the group. I believe the US can finish above Jamaica and Panama, but am not entirely sure about the rest (or even those two). And a win in the next home game is not a guarantee- besides Joel Campbell, they also have Brian Ruiz and Alvaro Saborio, three attackers who will be able to capitalize on a weakened US defense.

RealGunner wrote:Watch out for Joel campbell. Best Costa Rican player of all time

Snowing at game's location...could that affect the Costa Ricans? (Although many of them play in Scandinavia, MLS, etc. so are used to it).

Page 3 of 15
Permissions in this forum:
You cannot reply to topics in this forum
Latest topics
» ¤¤ WORLD CUP 2022: The prediction challenge ¤¤

Yesterday at 11:14 pm by BarcaLearning

Yesterday at 3:26 am by danyjr