Basically here to not wish congratulations to Inter, their toupee wearing spaz of a coach and their fans.

But glad Conte and people here saw the light on what a majestic player Eriksen is. The deciding factor of them winning the Scudetto along with their mid-season turn around.

Arquitecto wrote:Basically here to not wish congratulations to Inter, their toupee wearing spaz of a coach and their fans. 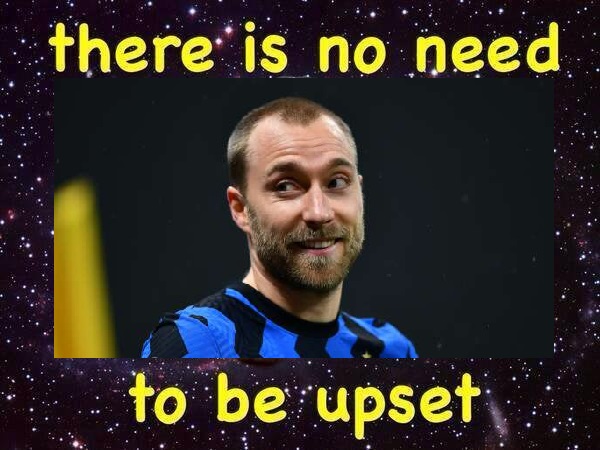 Arquitecto wrote:But glad Conte and people here saw the light on what a majestic player Eriksen is. The deciding factor of them winning the Scudetto along with their mid-season turn around.

Yep, Eriksen is that component who leads from being a loose cannon to being battleship.
Since he 's starter Inter get an incredible streak of wins and 2 ties (but  1 tie is at Napoli, tough stadium, where he scores the goal of tie) . Very good performances enhanced by two very important goals.
Deus ex machina .

eriksen was definitely instrumental. and even players like darmian like out of no where, he was single handedly responsible for winning two games when it all looked like inter tied.

how much of players will inter sell this summer robes, seeing that ur club had failed talks on selling their minority stakes for 250 million? is it like too serious or it can hold for next season without selling anybody important?

It sucks that it had to be Inter, but I am glad Juve was dethroned for a season. Hope next season has a different champion next year (probably not Milan).

On a serious note, this season's victory is due to two things. First, Juve shooting themselves in the foot. And second, that stupid Coppa Italia match. I said at the time that whoever wins that game will get the confidence boost to win the title.

Inter not only beat Milan in the game, but Erikson also scored and was allowed a path back into the team, which proved hugely instrumental.

Arquitecto wrote:Basically here to not wish congratulations to Inter, their toupee wearing spaz of a coach and their fans.

just read news about conte and players still discussing about taking 2 months paycut and a possibility of mass exodus.

milan fan through and through but i seriously hope inter sorts out or can find a good solution to this. a weakened inter side does no good to milan or italian football.

we just have to look at what happened after juve was relegated. that had knock on effect on italian football badly in CL.

I'm just glad someone capitalized on the massive opportunity Juve have given this season. We've been here many time before they always seemed to just snatch that scudetto away by the end, but not this season. Not even close.

This was Inter's to lose from the start, in hind sight. And they didn't disappoint.

I will congratulate and bend the knee if you all beat Juve next match.

Looking forward to Inter embarrassing themselves in CL, again.

Worthless team with a coach with a dime-bag toupee job.

KaLadin does it again. Never doubt the GL jinx.

Page 2 of 2
Permissions in this forum:
You cannot reply to topics in this forum
Latest topics
»  USA Gun Violence & Police Brutality Thread