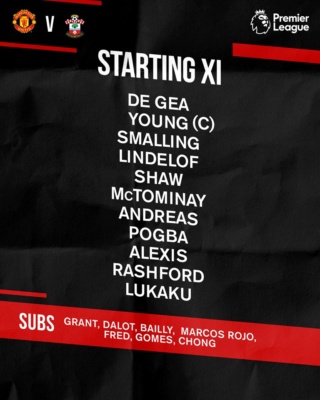 Nothing wrong with that tbh.

Somehow I had the impression that he was quite good at Valencia in the Primera, but for us he was poor. He is slow in decision making, taking too many touches and not fast at all. Even the mediocre McTomminay is better than him.

Anyway, we have 4 academy players in the starting line-up (forced by injuries), yet we are still 2nd worldwide when it comes to investments in the last 10 years. Poor management, poor transfers. Moyes, Van Gaal, Mourinho and Woodward ruined us.

I want to say Arsenal were unlucky but then, their strikers missed four great chances between them. They really should have removed luck from the equation, but what can you do when Lacazette and Aubameyang have off-days in front of goal? Apart from that, they did everything they needed to win.

Spurs were surprisingly flat. They made one great chance through Eriksen when needed some top keeping from Leno to keep out, but apart from that they weren't very threatening. I thought after the 4-2 earlier in the season, and after their recent poor performances, that they'd be super up for it and in our faces and not as tepid as they were.

That linesman, though. He was leaning to look around all the players from a free-kick. No wonder he couldn't give the decision.

It's very poor positioning from him. He literally just has to take a few steps to his right when the ball is hit to be line, but he doesn't even do that. And since he's behind the play, he can't possibly give any offside.

I spotted this after the game, but Vertonghen was also encroaching in a major way during Auba's pen. Auba misses anyway, but because Vertonghen already in the box, he could get around on the cover to block the follow-up chance. So you could argue that two major refereeing errors prevented Arsenal from winning as much as their poor finishing did.

As far as the season goes, the performance and result isn't bad for Arsenal. The United game next week is arguably more important.

Neutrals root for Chelsea over both, and all 3 over United

That Torreira challenge was absolutely disgusting.

Also where is CB, getting a penalty from an offside

@rincon wrote:Neutrals root for Chelsea over both, and all 3 over United

You can't be neutral if you are rooting for someone imo

@rincon wrote:Neutrals root for Chelsea over both, and all 3 over United

nah not a chance. Neutrals tend to favour Spurs over Chelsea easily.

Nobody on this forum is ever neutral. It's all agenda's. I know you want to see me suffer above all else.

also, wish I never shat on Soton the other day, forgot we were playing them this weekend and it'd come back to bite me in the ass like most of the things I tend to say on here ffs.

@Firenze wrote:Nobody on this forum is ever neutral. It's all agenda's. I know you want to see me suffer above all else.

Sanchez is absolutely the worst signing in PL history. Followed by Lukaku tbh.

He's not playing but I'd genuinely trade Bailly for a years supply of Bailey's and feel like we came out on top of that deal.

Completely dominated Soton, but we were very unlucky and we also have GOATkaku on the pitch who missed 3 key chances. Rashford was bad too.

Soton only managed two shots on target. The first was a goal and the 2nd came around min 43 and was a poor one.

If they keep playing like this they won’t score a 2nd goal only with lots of luck. But also, if our front three won't play better in the 2nd half, we won't win this game because other factors are not working for us today.

Yesterday at 8:37 pm by BarrileteCosmico