Anyone ever played this? It is on sale on Steam and I'm contemplating if I should purchase it

I am sure quite few did. Mole, Jay, M99, Thimmy and Firenze played at least 2 hours of it iirc

I think most of us played through the entire game. Can’t speak for Firenze

It’s a good game. I liked it, personally. It’s been a while since I played it, so I don’t quite remember the things that I particularly liked or possibly disliked about it. The combat system is pretty fun, once you get to grips with it.

I enjoyed it a lot, combat was really good.

My only real criticism is the level design was sometimes not as varied as it should have been.

That aside it's very good.

Second question, should I get the standard edition for €20 or the one with all the extras for €30? Not sure what all these extras do, I'm sure one of you does? 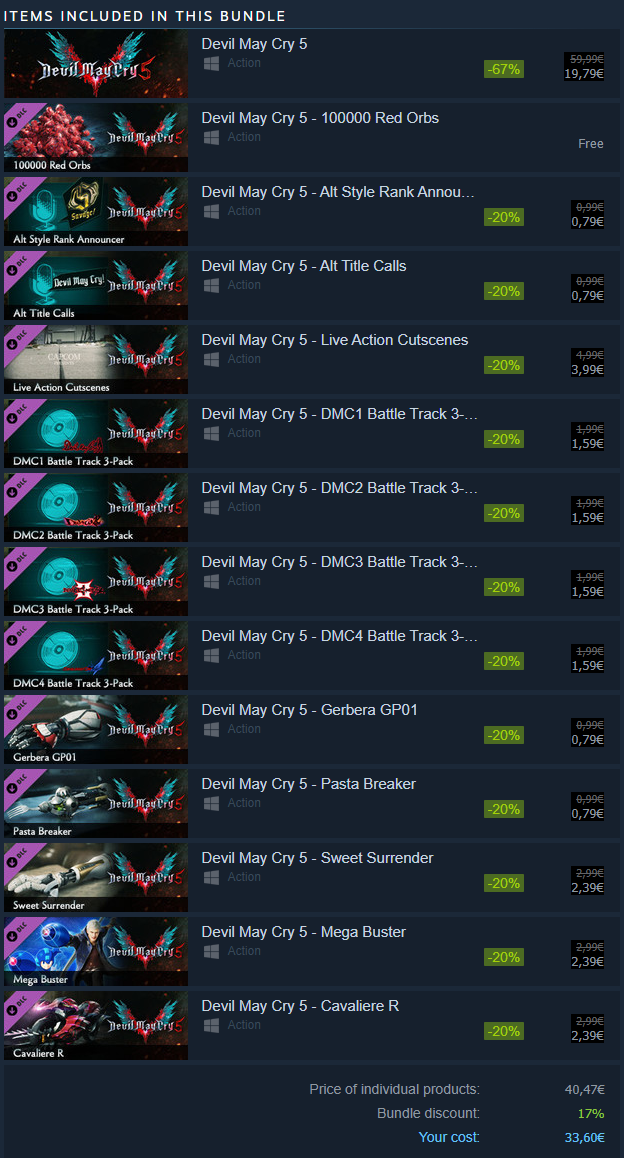 The extras aren’t necessary, at all. They do give you a couple of fun weapons, though. By fun, I mean, they don’t necessarily make you stronger, but the’re fun to play around with. One of them is a launchable pasta device, the «Sweet Surrender» one makes you immune to damage for a short duration of time, if I remember correctly, and the third one is just an alternative skin for the standard Gerbera, I think. The «Mega Buster» is basically Mega Man’s hand cannon. I liked using it early on, but it’s not that useful later in the game. I’m pretty sure the Cavaliere is another weapon skin for a weapon you get quite late in the game. The additional red orbs means that you can upgrade things sooner. Other than that, it’s just in-game sound effects and some artwork.

Thanks Thimmy. Is there any way you can acquire those weapons in-game, or is purchasing the only option?

I know for certain that you can’t get Mega Man’s handcannon, «Sweet Surrender» or the Pasta thing in-game. They’re honestly not all that great, though. Just fun to play around with. I didn’t use Sweet Surrender much, so I’m not sure how useful it is. Mega Man has a decently powerful «ultimate move» early on. It fires a laser beam that I used against some of the bosses. The Pasta thing is just amusing to witness the first couple of times you use it, can’t recall it being particularly useful.

Got the standard edition. Been playing for almost a couple of hours and it kinda reminds me of Bayonetta, a game which I didn't particularly enjoy.

To refund or not refund.

They’re quite similar types of games. I would’ve adviced against getting it, if I’d known you didn’t like Bayonetta.

In all honesty didn't seem like a bad game at all, great visuals and combat was varied. I just don't like such fast paced combat and over the top characters of Japanese games.

Fast paced combat is right up my alley. I’m getting too old to dominate twitch shooters like, Call of Duty, but I generally do well in games that require you to act and react fast

Did you play Dark Souls? That game's all about fast reactions.

danyjr wrote:Did you play Dark Souls? That game's all about fast reactions.

I actually never played any of them. And yet, RG’s constant references to the series, as well as it’s countless spin-offs, has left me quite exhausted by it. I might pick one up some day, when I have nothing else to play.

Played them, loved the combat but I absolutely hated the death/respawn system. It is too taxing to be fun.

danyjr wrote:Played them, loved the combat but I absolutely hated the death/respawn system. It is too taxing to be fun.

I reckon that the hate stems from me being a PC gamer. We're used to Quicksaves whenever we wish whereas most console gamers are used to the checkpoint system. Now multiple the annoyance by 10 due to constantly dying and having to reply what you had playeda dozen times, and that's how much I hated it

Having said that I didn't hate Jedi: Fallen Order as much. Maybe cause I didn't get pwned as often as I was in Dark Souls