The biggest football match of the season, in terms of money, is happening, the Championship play-offs final between Huddersfield and Reading.

The financial worth of this game -among other things TV money incl. a guaranteed payment parachute in case of re-relegation- is staggering 230 million €

While Reading finished 3rd in the table, and according beat 6th place Fulham in the playoff semis, Huddersfield, as the 5th placed team, had to over come 4th place Sheffield Wednesday.

So once, again, just like Brighton had to suffer last season, a team which finished higher up in the table might be overtaken for promotion by a team 2 places down after the full season.

If that isn't a monumentally disgusting and stupid mode of settling things, I don't know what is.

Anyway, the rules are the rules, and this is how it works in the quintessentially British Championship.

FC Reading, managed by notorious Dutch roughneck Jaap Stam, has a decidedly Oranje flavour to it, while German-American David Wagner has led the famous 'Wagner Revolution' at Huddersfield, a club with a proud tradition of winning no less than three league titles in th 1920s under legendary football coach Herbert Chapman, who later went on to write tactical history at Arsenal FC.

Wagner, Klopp's Mainz playing team mate, best man and former BVB 2nd team coach, has added something like 5 German players, as well as the Kloppian way of turning his players into 'mental monsters'.

Wagner achieved this goal through unusual and bizarre methods. For example, he had his players parachuted into Northern Lapland, only equipped with a compass and some underwear, with the players having to kill polar animals for fur and food, and having to find their way through hundreds of kilometers of dark, frozen woods southward to the team bus waiting, heated and with blankets and hot tea ready, in Östersund.

Upom returning to England, they had to be able to recount all 30 Innuit words for snow, else they were to be sold the next transfer window. The players who passed the tests were rewarded with 3 hours of naked locker room wet towel slapping.
The result: a team whose financial budget was a mere 18th place in the notoriously competitive and grueling Championship made it to the promotion pay offs

Here are a couple of articles describing the Wagner revolution.

Most valuable match in football history

main man Jaap got this

How legal would it be to buy a top tier Championship team, get them promoted, siphon the promotion / relegation cash out and run away into the sunset?

Asking for a friend. 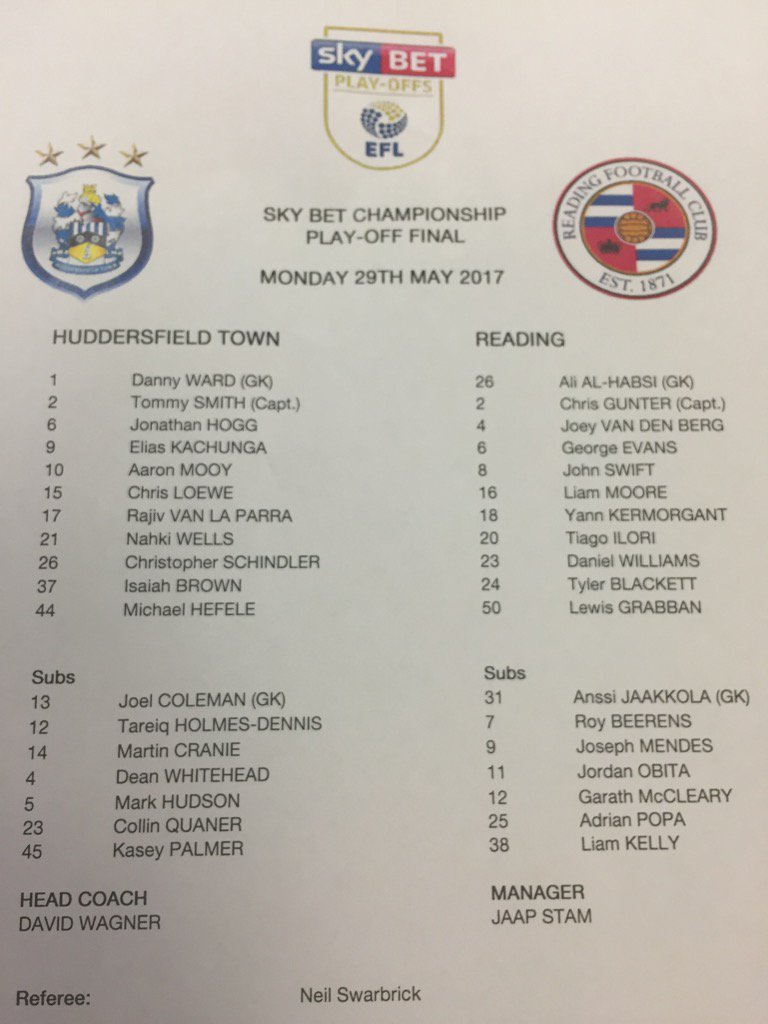 Both sides name an unchanged side from their play-off semi-final second leg victory, but Huddersfield do name forward Kasey Palmer on the bench after injury.

Both at one point regarded as the future best defenders in the world, by a portion of their then clubs's respective fanbase

Tomwin Lannister wrote:How legal would it be to buy a top tier Championship team, get them promoted, siphon the promotion / relegation cash out and run away into the sunset?

Asking for a friend.

Monday afternoon. What a retarded time to play this game

Hapless_Hans wrote:Monday afternoon. What a retarded time to play this game

Oh I see. What holiday is it?

Yeah it's just a spring bank holiday lol, it doesn't really mean anything.

It's Memorial Day in the States too isn't it. Those are unrelated, then?

How in the world did he miss that

Huddersfield have a -2 GD? How are they even in the playoffs

Watching Huddersfield is indeed like watching prime Kloppmund. Even down to the jerseys.

Also a bit paradoxical that the most valuable football match in history is fought out by a bunch of former 1860 München, Dynamo Dresden, Union Berlin, and Ingolstadt players

AKA The Ilori Effect

urbaNRoots wrote:Huddersfield have a -2 GD? How are they even in the playoffs

The Championship lads, the scenes i saw this season was really eye opening lmao.

Reading did well to get through the early pressure.

Both at one point regarded as the future best defenders in the world, by a portion of their then clubs's respective fanbase

Page 1 of 2
Permissions in this forum:
You cannot reply to topics in this forum
Latest topics
» Lionel Messi Transfer Speculation

Today at 7:34 pm by The Demon of Carthage