those two decisions, i m f*cking hating referee this season,
1. Sturridge offside and 2. Sterling given the foul against

Just shut up already about Gerrard not being able to play DM, Red Alert. He's been flawless in the role today. Offers a million times more than Lucas when going forward, too.

Sturridge, god dammit. Only half-time, though. Let's keep it going!

BR finally got it right, defensively I mean, at least for the first half.

His positioning has been off. lol

Again, team performance / us sitting deep making him look better in that role than he is.

Also, did anyone see Mirallas dive? Imagine that was Suarez.

"Luis Suarez could nutmeg a mermaid". 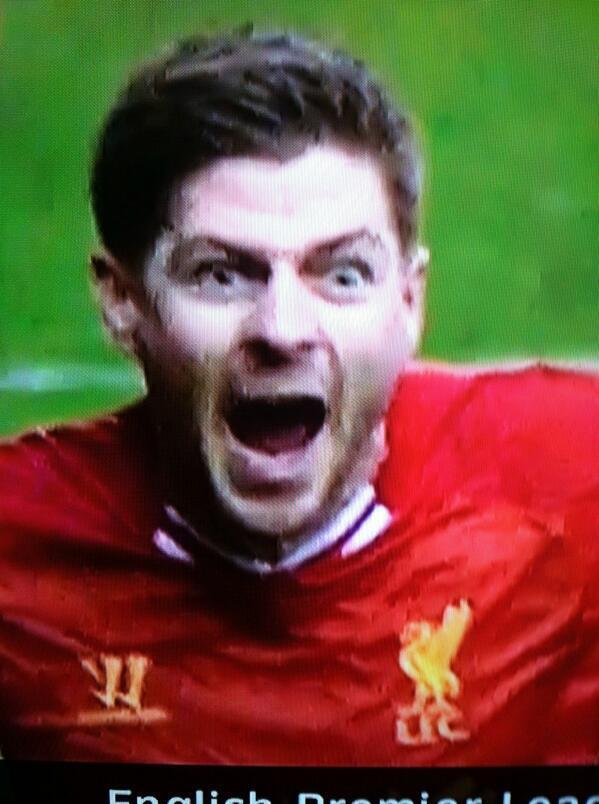 And a great performance, too! I will not be ashamed to proclaim that Rodgers listened to me and told our forwards to play deeper. We looked much more in control in this game than in against Villa or Bournemouth. Now there was perfect balance between ball-retention and counter-attacking.


Sturridge, just a little bit from a hero to a villain with that missed penalty and wasted a glorious chance to square it to Suarez on the counter. That said, he looks capable of playing the lone striker for us should we lose Suarez..

Sterling with another sterling performance. Coutinho picked up his game, too, when it counted. That pass to Sturridge

Such a fantastic win in every way!! The bitters are four points behind us and we remain fourth!

Im not sure who was man of the match, Every single player put in the best effort i have seen since the Spurs game.

Gerrard and Skrtel were phenomenal, Skrtel has been excellent since the friggin start of the season. Gerrard was a true inspiration today.

in that order. Its excellent how Rodgers has coached Sterling to become such a matured winger, His pace and touches are excellent. Coutinho is back, Magical today. Suarez meh you dont score 3-4 in every game lad.

Sturridge just in: "I want to apologise for my reaction after being substituted. I was disappointed about the penalty"

Anyways, Flanagan was awesome, Cissokho also tried, Ill give him a 7 in this match. Kelly was solid after coming on. Mig did what he had to.

Toure was the worst and i think he is the weak link in the first 11 for now.

The energy and pressing was fantastic today, Rodgers has been able to motivate the young players ( cou, ster etc ). It looked like they were playing for the shirt not for stats.

SAS had an argument when we 4-0 up after Sturridge was chasing his hattrick.

Still think Sturridge should of passed it back to Coutinho, and not square it to Suarez.

Suarez looked bitter (pun intended) after wasting a corner... 4-0 up too.

4231 is the way to go until we get some players back from injury and can go back to a 433. Still not impressed by this counter-attacking style, either.

Was so sceptical of our starting line-up and intention to look for the counter in our initiation yet master motivator Rodgers had our team pressing high from the get-go and rushing our players fluidly on each dimension. Everton stood ground with a disciplined defence to hold us off eventually yet the swift movement on the ball with the retention and the rotation off the ball to compliment, was in perfect synch to a derby in which you expect ugly football.

What worked is Gerrard's Zurutaza type quarterback role to which perfectly shackled an ineffective Ross Barkley, further reinstating how absolutely possessed our captain is within the Merseyside Derby as per usual. Sterling and Coutinho's pressing off the ball had Stone and Baines continue to surrender the ball, to which had SAS move in unison on the front flank while were afforded Henderson to link the attack and midfield. Neverton were rather poor in not exploiting the green Flano and Cissokho who looked relatively untroubled by a threat which chose to narrow down infield rather than cause us problems out wide.

Sturridge directly behind Suarez provided an interesting inverse role to which had Sturridge actually released infinitely by Suarez's drifts out wide to bring in the play, the single most interesting move of Brendan Rodger's in his Liverpool era. It reminds me exactly of the Balotelli-El Shaarawy move picked up in Milan's 2nd half of last season. It allowed Sturridge perfect pockets of space to reel in Suarez' drive passes from the wide and Everton looked absolutely clueless to the consistent dynamism of its play.

Steven Gerrard's header were absolutely brilliant from a worthy Suarez corner. Never have I seen such a feverish look in his eyes during the celebration.

Danny's finish for the second had me strangely feel little doubt on his capitalization of the chance, given how composed he was tracking onto Howard, the finish a mere icing on the cake to what was a brilliant exploitation of space.

His 2nd for the brace was a moment of pure genius, capsuling the player Danny has become for us, despite the Hodgson fuelled injury of 2 months-he has 4 goals in 3 games post injury. I cannot express the brilliance behind the ingenious chip, though Howard was poor to keep off his line. Sturridge's Balotelli-esque celebrations were stark contrast to Gerrard's passion fuelled run to the corner and it was perfect.

Suarez, essentially the unsung hero playing a sacrificial role for tonight, capped off his selfless performance with a brilliant swooping run out wide, finishing it with his equally deft left foot to add salt to Neverton's wounds.

Where we stood out from the Toffees was the decision to apply copious amounts of pressure from the initial whistle, to which allowed Gerrard and Henderson to control the game without fear of Everton's narrow counters, to which seldom troubled our defence bar a few strong saves from Mignolet. Derbies are built upon a brimstone of momentum and the fact that we continued this momentum well into the 2nd half represents a transcendent evolution in what is a raw Brendan Rodgers. His response to all of Everton's flurries whether in subs or from the start encapsulated what was a near perfect performance from us.

Once again, Stevie G represented our performance with a vintage Gerrard game, putting testament to what was a very complete show by our captain. Defensively he shackled Barkley, was pinpoint on his passes on all dimensions of the field, allowed many touches for Henderson to move forward and was an absolute leader on the field. His post-match responsibility taken for Sturridge's rush of blood penalty summed up how he stamps his authority on and off the field. I cannot express the affection I hold for our hero. CAN evolve into this role if he takes the responsibility that he did within this unique derby.

Overjoyed by our performance and result and the fact that Arty actually made a thread that won us for once.

I love you all, we deserve and will remember this.

Now it is clear that BR was trying to test 4-2-3-1 against the Bournono for this game. But I think BR should be given credit that he did the shift between SAS on the left side and not on the right hand side. Also, Suarez and Sturridge both did OK defensively on that side which will be needed on the next games, before it becomes our weakness.

I would have liked if Studge celebrated the goal as he always does. That was kind of arrogant from him, it is good that he missed the penalty, his overconfidence or arrogance or frustration or not keeping cool would vanish as a result of
that.

But he is surely becoming lethal

I absolutely love that man Gerrard, his face after that goal will haunt young bitter Evertonians for life

What a performance, I just have no words.

And Red Alert please kindly f*ck off with your Gerrard's DM role hatred.

AND Skrtel my goodness this is the guy I remember from Rafa's era.

Calm down guys, opinions and arseholes, we all know the story.

Great win, really pissed oft that DS took the penalty, Gerrard is our PK taker and was on, couldnt give a fuark about his hattrick, ive seen suarez miss out on a hattrick chance from stevie taking a peno.

Other wise we had a good performance, don't think DS and luis can hold down that left hand side if we play a team with a good right side. They didn't drop all the time.

And Red Alert please kindly f*ck off with your Gerrard's DM role hatred.

AND Skrtel my goodness this is the guy I remember from Rafa's era.

The same SKrtel you wanted to get sold because he's been a liability this season? He's been playing this for majority of the season.

Also, we defended AS A TEAM. We played with 8 men behind the ball and played on the counter. There's a reason we played DEEP. It was to cover Gerrard as he can't play the role. Luckily for us, Everton played a high line and we exploited that with Sturridge and Sterling's pace.

Everton had 60% possession, and 500+ passes. We had 40% with 350 passes. They had TWO TIMES the amount of passes in our final third, they were just wasteful with it.


Yes Gerrard played well, but it was because of a defensive team performance. But sure, let's all knee jerk and say he's the second coming of Pirlo etc.

Anyways this picture pretty much sums the whole match for me. Yes Gerrard played well, but it was because of a defensive team performance. But sure, let's all knee jerk and say he's the second coming of Pirlo etc.

Some great tweets there. It warmed my heart hearing Garcia's and Rafa's songs

Yes Gerrard played well, but it was because of a defensive team performance. But sure, let's all knee jerk and say he's the second coming of Pirlo etc.

Johnson was one of the better players before that United game... again, he played with injuries for over 2 months. He still did quite a solid job. I failed to believe he was on the decline, there's a difference.

Skrtel has been a beast for majority of the season. He's back to his best.

Page 3 of 4
Permissions in this forum:
You cannot reply to topics in this forum
Latest topics
» The Gospel of Gabriel Jesus according to Pep