Suarez attitude was a lot better today. He was demanding the ball, putting pressure on the opposition and looked lively. Well, much more lively than his last game. Definitely not at his best, but he is 3 weeks behind the rest of the team in terms of training fitness.

The teams general performance was a lot better. We are a much better team when we don't have to rely on Gerrard all the time. I jokingly compared Coutinho to Ronaldinho in the past, but he is just SOOOO gooooood. That goal was amazing. I know it's only pre-season, and against Thailand, but just wow.

Aspas turn on his second goal was great. I enjoyed it.

Skrtel's confidence looks back, and Lucas look's like his coming back to his best. Not much people have spoken about this pre season, but he's closing down just as good as he has been and is making some great interceptions for us.

The pre-season to "Asia" look's to be a success as of now. Hopefully the players can show the right level of fitness for the course of the season.

HEIL MEIN REDS wrote:Dont know what are we playing there, somtimes looking exhausted due to conditions there

It's actually a great experience for players. The players aren't used to weather like this. The fitness of players will improve a lot from our pre-season tour as most of them are used to the weather in Britain where it's rainy and cold.

Not only were they playing against the heat, they're playing in heavy humidity. That tires you out a lot. You could see Ibe and Suarez sweating before they even came on the pitch.

It (the humidity) was like that in Indonesia too. When the Indonesian fans were lighting flares up, the smoke would stay on the ground because there's no wind; it's just humid everywhere. It's like that in Australia (although not as extreme as countries closer to the equator) when it's summer, but it's winter now. So you could see the players play more "comfortably" against Melbourne Victory as they were more used to weather.

We get it easy it in pre season but games are on at 3AM in the Premier League for us down in Australia XD. It's not a great feeling having to wake up that early to watch Liverpool as of late. Thankfully it look's like a much more promising future with Rodgers.

McAgger wrote:MIgnolet has been great. I'm so much more confident with him in goal than Reina

Been saying this for a while.

For the last couple of seasons with Reina in goal, I always had a fright of the opposition scoring if they got a shot on target, even if it was from a "weak" shot. Lost confidence in Pepe, sadly. My only concern was with Mignolet's "sweeping" skills. We don't play it back to the goalkeeper as much as we have with Reina in the past, but Mignolet has been very good with his distribution thus far.

He won everything in the air. Pleased with that even though the Thailand team is short.

The only few players that had a "poor" game were Enrique, Allen and Borini for me. The rest were either solid, or very good.

Also I am not really fond of playing allen, gerrad and lucas starting together. When we are off the ball, that always looks so unbalanced

something-red wrote:The only few players that had a "poor" game were Enrique, Allen and Borini for me. The rest were either solid, or very good.

Allen had a poor game?? I didn't get to see the game but from reviews i got the feeling he was real good today!! So a little confused

I agree. Not a fan of that trio.

Allen and Henderson aren't going to unlock defences when we play at home. They're just not that type of player to do so.

When we play away, Henderson and Allen would be good as they're quick enough to break forward on the counter.

Toure, Borini and Allen were the "weak links" in the initial starting XI today imo. Enrique also has to work hard. He's the next one to be "fixed" upon. His pre-season form has been a worry so far.

Suarez will take Borini's position, I guess Skrtel and Toure will rotate next to Agger, hoping Kolo isn't a starter anyway, meaning we need to find someone to improve Allen's position.

something-red wrote:The only few players that had a "poor" game were Enrique, Allen and Borini for me. The rest were either solid, or very good.

Allen had a poor game?? I didn't get to see the game but from reviews i got the feeling he was real good today!! So a little confused

I put poor in quotation marks as well, he wasn't as "solid" as I thought he could have been. He could of did better, honestly. We seemed to play a 4321 instead of our normal 4231 / 433 with Coutinho and Aspas behind Borini.

Allen was playing alongside Lucas and Gerrard rather than in front. He recycled the ball around okay, but we really didn't dominate the midfield. Not entirely blaming him for that, I just don't think he was as good as he has been in the past pre-season games. He wasn't exactly poor, but he wasn't that "solid" either.

Allen is probably yet to recover his touch and confidence. It is true that he did not do anything less than good, just that at least I expect highly of Allen.
ynwa mate, Toure did nice interceptions on few occasions, he was even commanding,instructing the back line at times.
It is another thing that Skrtel has developed that confidence now with the ball at his feet. Like once he passed to gerrard and nicely got into more forward position to receive the ball and played it forward. So I guess BR should experiment skrtel and agger together in next two matches.

Skrtel has always been a decent passer, to be fair. Very underrated in that aspect of that part of that game because of his poor back pass to Tevez...

Toure has done fine this pre season. But I don't rate him to be as good as everyone makes him out to be. He's not starting PL material. He'll get caught out in the PL sooner than later. Let's not forget Raheem making him look like a fool in his first PL appearance last season.

Subs not used today:
Jones, Kelly, Flanagan, Spearing, Wisdom, Robinson, Downing, Sterling, Coates, Assaidi, Ward.
What can I make out of it?

Jones, Sterling, Wisdom and Downing, Kelly, Robinson...these will have some role next season.
Flano, Coates, Assaidi, Spearing seem to be going out either on loan or sold.
Ward I have no idea.

Was out on the cape today so missed the match, so if anyone doesn't have a link where I couldn't download this full match to not watch it, I'd appreciate it if they didn't PM it to me.

Aspas, what a bargain. 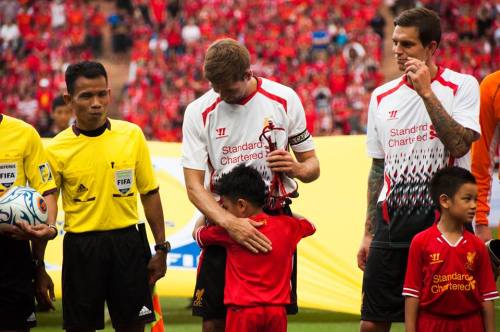 There's more to it.

My heart just swelled with pure emotion in seeing those pictures. Wonderful moment of display there.

Respect to Stevie for returning the affection/gesture made by the child.

Page 3 of 3
Permissions in this forum:
You cannot reply to topics in this forum
Latest topics
» UCL Final 21/22 | Liverpool Vs Real Madrid