Just read a report that says Marseille have a made a formal offer for Didier Drogba according Italian Journalist Alfredo Pedulla.What do you guys think

Internacional have made a proposal for Lyon winger Bastos according to Sportmediaset.

My man Christian Gourcuff of Lorient is working his magic again. He has no budget, all unknown players and a modest fan following... yet Lorient plays attractive footy and is in 5th place with 31 points, 7 points behind PSG.

The guys is a genius manager. He doesn't even use underdog tactics lol.

Other managers worth mentioning are Garde of Lyon, Baup of Marseille and Puel of Nice. All doing great jobs.

Watch out for the next crop of kids at Lyon, especially Benzia. A lot of talent there.

As far as my OM, players and manager doing well despite pathetic ownership. Joey Barton has been really good btw lol. Valbuena is taking it to the next level. I hope we can hold onto him. Not sure if Rey stays or goes. Gignac has been injured for over a month and is finally back. OM struggled while he was gone.

How Gourcuff isn't mentioned enough throughout football is rather sad. Given that he has lead this poor squad of Lorient to playing attractive attacking football whilst being 5th in the Ligue 1, has earned my utter respect for me. Along with Remi Garde he has been the best manager this season within the Ligue 1.

Good to see Puel doing well as I enjoyed his Lyon and Lille team.

I enjoy seeing Rennais as Alessandrini and Feret are quite enjoyable to watch. Achieved well this season given their relatively young squad.

I've kept a close eye on St. Ettienne who have been one of the best teams in Ligue 1 despite recently. Gaultier is pragmatic but brought the best out of his players.

Aside from that I'm enjoying watching Toulouse and Lorient.

Younes Belhanda's been linked with Fenerbahce..I believe they had a €15m bid rejected last summer by the same team.For Belhanda it would be a step sideways in his career,i rate him very highly saw some Montpellier games last season and he's definitely destined for a top club unless he doesnt choose to make poor career choices.Either ways seeing Louis Nicollin's stubborn ways he'd only leave for a big sum by the look of things.

He would've been great for France as well tbh.One department where i thought France were sorely lacking was the AM position but thankfully they have a rising talent in Grenier now.

Belhanda has been mostly poor this year unfortunately. Not only has his level dropped off, his mentality is not right... he has had several disciplinary issues. At this point, he's taking the same path as M'Vila.

Maybe i am generalizing a tad bit but why am i noticing a trend of here of several French players facing disciplinary issues ? I mean the likes of Benzema and Ben Arfa(a while back),Menez,M'Vila and now Belhanda(well he's technically French) all having attitude problems..Maybe its just the arrogance about them ? No wonder the France NT are a disjointed bunch.

There's always some arrogance in France... that's ok. The issue is when it affects training and games. For M'Vila especially and now Belhanda, it was effecting games. Belhanda is Moroccan btw and doesn't play for France.

A lot of freedom of expression is allowed in France culturally... much more than most any place. So you're going to see people say and do things that may seem shocking to others.

If you perform, a lot gets forgiven as with Henry, Gallas, Evra and Ribery in the recent past. But if you create problems with the group and the team, watch out. The hammer comes down hard.

For example, M'Vila is banned from all NT until after WC 2014. Ben Arfa and Nasri are black listed. Gallas isn't allowed near the NT since 2010.

With DD, it's all cleaned out. If you have any attitude issue or lack the spirit of group, he won't select you. The other good news is that there's a lot of talent to choose from now.

I mean Pogba has a history of being a difficult person too. He's not a bad kid. It's just the individualism is applauded in France and kids have strong personalities very early.

Yeah but the main point being Belhanda is still born and bred in France.But its still shocking how many players have faced disciplinary issues maybe even more than England lol but thankfully you have Deschamps as the NT coach now instilling his 'Juventus Philosophy' into the team and hence has achieved great results so far.

Btw with the way Pogba has been playing lately,i think it wouldnt hurt to give him a callup to the senior team imo.Pogba himself has set the goal of being there with the France NT in 2014 WC as well.

It's going to be hard for Pogba. You have Cabaye, Matuidi, Capoue, Sissoko, Gonalons and Mavuba that have gotten a shot and already made an impression. That's 6 guys already for 2 starting jobs. He's going to have to force his way on. All of those guys are having breakout or excellent seasons too. You always have Diaby lurking too.

There's a backup AM job to Valbuena open, RW competition (Menez leading right now) and backup LB. Other than that, no opening that i can see.

Pogba should focus on the U20 WC in Turkey in 2013. That's where he's going to play. After that, he needs to keep his level and hope some of the other guys fall off of the senior team.

I recently read an article on some of the stadium projects in France i found the design from Bordeaux's new stadium the most impressive especially from the outside.

This is just an awesome concept.lol

Also i dint find Lyon's design to be that interesting but the capacity is pretty apt though for a well supported club like them..58K capacity is what i read but i wonder why its costing them so much ?I mean total construction costs amount to 400m+ euros..Thats a lot i would say.

Here's the one under construction in Nice: 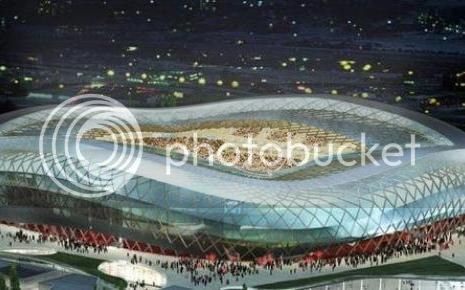 Looks great..Btw OM's stadium which is being renovated now,does the new capacity amount to 70,000 ?When it is scheduled to complete ?

Saw some design pics of the stadium and it looks gorgeous as well.

Here's a good place that has all the info on new stadiums and renovations.

Surag... OM is 67k seats and set to be finished in summer of 2014. But i have a feeling they run out of money lol, which would be great since a group headed by Zidane is waiting in the wings to buy the club.

I thought it was great only on the outside but it looks even better from the inside..Surely a contender to host the CL final once the stadium construction is done.With all this renovation going on,they must be suffering in ticket revenue i guess.

which would be great since a group headed by Zidane is waiting in the wings to buy the club.

You mean a PSG style takeover or something ?

I thought it was great only on the outside but it looks even better from the inside..Surely a contender to host the CL final once the stadium construction is done.With all this renovation going on,they must be suffering in ticket revenue i guess.

which would be great since a group headed by Zidane is waiting in the wings to buy the club.

You mean a PSG style takeover or something ?

Yeah... he has the money all lined up. They would have unlimited funds as well.

Especially the English clubs(Arsenal and Newcastle in particular who buy players regularly from Ligue 1) may have to look elsewhere if thats the case.

Yeah. That's going to be long over especially since Lyon is going to grow exponentially in revenue too... they own 100% of their new stadium. Aulas (and his minority partner) funded the whole thing himself. Once that gets cranking, he can spend with anyone in Europe.

Page 1 of 1
Permissions in this forum:
You cannot reply to topics in this forum
Latest topics
» De Bruyne is the worst 80M€ player out there

Today at 11:08 pm by BarcaLearning