When will he be sacked?

Should have been sacked in the summer like I said.

Meh, didn't see this thread, but posted about this in the calcio thread.

Needs time he doesn't have essentially. I think they'll get there under him eventually, but the Milan brass don't have time for eventually.

Nope, the idiots are keeping him. Seems like he's staying no matter what, unless we lost the next 3 games culminating to a Juve loss (hope it happens tbh), season is already over anyway
_________________ 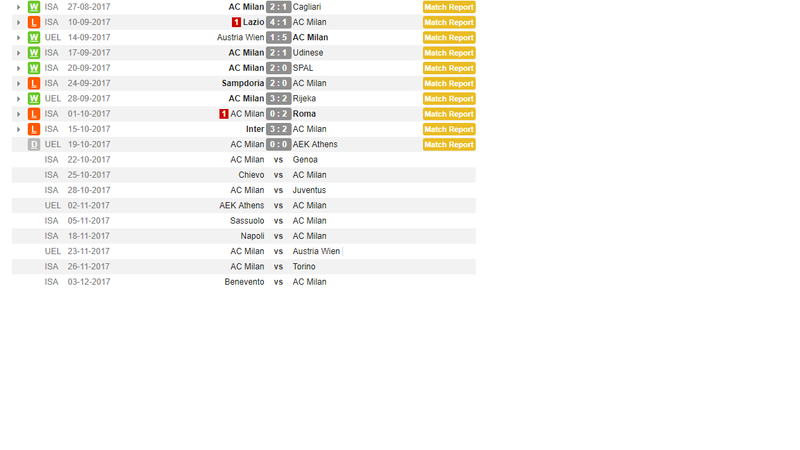 If he makes it passed November 18, then he'll be the manager for the season probably

His time at Fiorentina was quite good. I don't think he's a poor manager but he does not have a handle on this team. I don't think this team is that great personnel wise either, so you need someone who can actually raise their level, a Conte type of manager

Montella does the best he can with what he has. Fans should blame Fassone & Mirabelli for not giving him the right tools to work with. Even the best mechanic in the world can't repair a car transmission with a wooden stick.

2013-2014 Fiorentina had more grinta and more talent than this current Milan, with less money involved and less pressure for success.
In a realistic world, Ancelotti or Conte or Max or Ventura would not do MUCH better than Montella at this point, unless they can do miracles.

A good manager can elevate the players just like good players can elevate a manager. Quite clearly, Montella is not the one to life this group.

I fail to agree that Milan has a worse squad than Sampdoria, who smashed them. Lazio, who looked like they were from a different league when when they played and a team unable to beat Athens. All with pathetic displays.

It’s not about scapegoating Montella, it’s just too hard to get rid of 11 players in October, while it’s easy to replace a manager. I think they’re hesitant to do so in case he can turn it around but mainly because it would admit a failure of rather large proportions. You don’t spend that much in a single window and expect to be this poor

Bonucci was worse than Musacchio in the derby, just saying...

I agree when you say it's easier to replace Montella than 11 players. But to me it isn't fair or appropriate to do so right now.

FAIR: Spending 200m and expecting big results is ok... if the players you buy are actually worth 200m. Now it gives tons of pressure on the coach shoulders but in reality the team is barely better than it was last year. Bonucci is a good piece of business, same for Conti and Rodriguez. The rest is only overpaying and buying average players to fill the holes. So the 200m needs to be put in perspective when evaluating Montella's work. Proved his capacities with Fiorentina having decent troops at his disposal.

APPROPRIATE:  Ancelotti (in talks with Croatia) and Lolo White (former interista) are the only decent available managers. Anyone else to me is like 4 quarters for a dollar. Coach gone, squad remains the same. With Ancelotti you could expect a spark of genius that lasts a couple of weeks then it goes back to normal.


Montella deserves to finish the season, he just needs from 1 to 3 good players (one winger, one cm and if possible one striker) in the January window. I used to read newspapers blaming him for juggling with formations, but what more can he do ?

Changing formations and your starting 11 this frequently is not a sign of tactical flexibility but I. His case, a sign of uncertainty.

While I do agree with you, a new manager would not save their season it would just be another move for the future but the bottom line for me is that Montella has done nothing to justify his stay either.

They have a better team than last season but are not performing better or getting better results. That’s worrying. Signing three players in January, three really good players, won’t happen. Also, let’s not assume that after spending 200M in the summer, there’s an excess of cash in reserves to spend on more players. It puts them in an awkward spot.

At the end of the day, you can’t keep putting in such performances, getting such poor results and expect to keep your job. It’s not unfathomable to imagine him getting the axe by November if this run of results persists. It’s one of the only changes a team can make outside of transfer windows to try to find something different

Montella of course deserves blame, not all of it but blame for sure.

For someone who expects Milan to reach the CL spots with this squad, firing Montella makes sense. And whilst i disagree, at least it follows a logical path and i respect that.
Yet it never was my case, at no moment in summer or in autumn i called their mercato anything better than disappointing as a whole.

That's precisely why our opinions differ. I think your point of view is shared by most AC Milan fans and executives. Sports is a tough business, if i was Montella i would be feeling the heat by now but i'd also laugh in my beard because my successor won't change anything before imperative winter reinforcements.

It’s a quality over quantity argument. You can’t simply spend 200M and not aim for a top four finish. Not in Serie A where windows like that don’t happen.

However, it’s not 200M spread around 4-5 players. It’s 200M across 8-9 players then it tells a different story. Spending 200M and finishing behind Lazio? It’ll be tough to sell that it’s the best they can manage so there has to be accountability somewhere.

I agree that they didn’t get it right with this mercato. Maybe it’s too soon to say they got it completely wrong though.

I don’t really think there’s a manager they could hire tomorrow that leads them to the top four in Italy with this squad. It’s not even to do with Milan but because Serie A is very competitive this season so it will not even take an instant resurgence but for a team above them to fall out of a race they are capable of winning.

@BarrileteCosmico wrote:Bonucci was worse than Musacchio in the derby, just saying...

about the team , it's enough to say that your most paid players are the GK old 18 years and your BC old 30 ( how much is happened in football? the real difference makers play on other roles ) and we talk about very high salary
Seriously how can't you buy a great CF with 200+ mln ?
When Raiola said that Mirabelli was the worst guy to have worked with him , he was probably true.
Ffs he made just the observer under us

Relevant results leading Catania and Fiorentina got with great football (3 row in a row on 4th place).  It deserved credit.
But basically a great team is different for pressure etc
I can imagine him make same career than Mazzarri

His fiorentina days were nowhere close to pep-football

I thought he would come good, the few games I saw his Milan perform decent and organized with a weak team, last summer.
But it does not look like it now.
Not sure how much is his fault and how much is due to the ectoplasmic interference of the old Carnutian graveyard the Milanello's newest training pitches are built on.
_________________

Conte and possibly Ancelotti back in Serie A.

Yesterday at 9:25 pm by rincon