Will officially join on Sunday; first game will be Bournemouth away on Boxing Day.

Arteta: “This is a huge honour. Arsenal is one of the biggest clubs in the world. We need to be competing for the top trophies in the game and that’s been made very clear to me in my discussions with Stan and Josh Kroenke, and the senior people from the club.We all know there is a lot of work to be done to achieve that but I am confident we’ll do it. I’m realistic enough to know it won’t happen overnight but the current squad has plenty of talent and there is a great pipeline of young players coming through from the academy.”

I'm positive,this is rebuild process and he should give us some identity(or just bring it back),so i don't have any short term expectation(result wise)
earliest to judge properly of where we are and how he is doing is this time next year imo 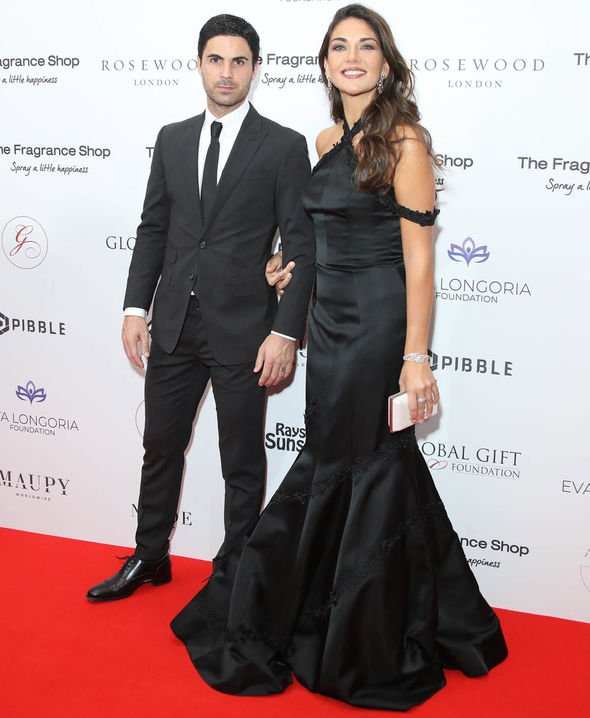 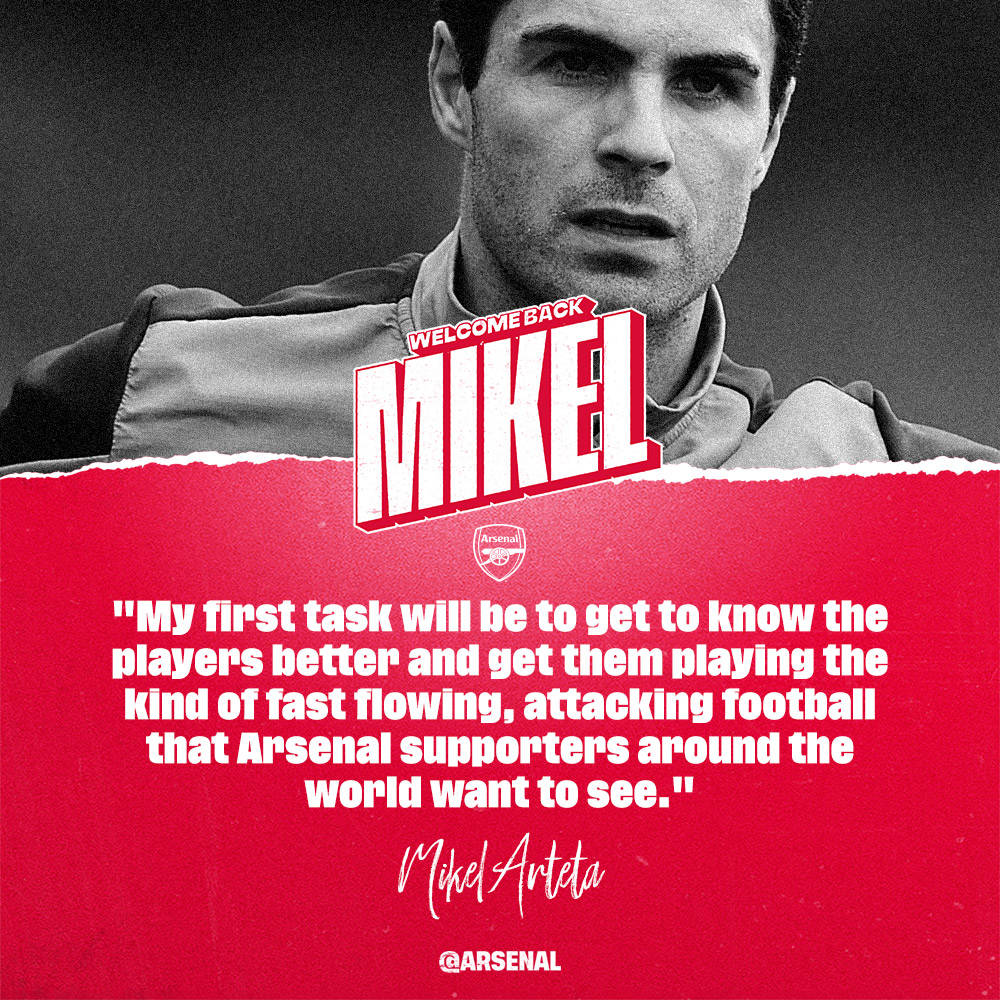 
Thread on Mikel Arteta’s major impact at City and how he has been key to City’s recent success pic.twitter.com/RgCOLMzDeA

His wife is pretty.

If his managerial skills are even half as good as his game with the ladies, Arsenal will finish top four this season and be crowned champion next year.

Also worth listening to Raul Sanllehi and Edu, talking about Arteta, Ljungberg and more:

Amazing interview. Give an insight of the type of football that he has in his head.

- We have lost our identity of the football that we play.
- Accountability.
- My idea is non negotiable
- Basic blue print of football include we need to have passion, be dominant, aggressive, I want the ball.
- I will tell them what is going to happen then it has to happen and I would have given them the tool to deal with it.
- With young players its up to them to prove they are ready.
- We have to create fear in the opponents to come to emirates.

Only problem is that we did something the same with more nostalgia when we went almost into administration, we got Dalglish. Arteta, inshallah has picked up some things from Pep.

That said, you need an overhaul. No idea who deserves to play and who still is committed to the jersey.

The only thing I'll recommend is something that no other person would say probably, that do not have an expectation that you won't win 4-0 every game with a small change in formation after this. Just understand this and wait for progress, I understand some of you will be like "wtf, wat u saying" but its true, y'all are the most flex supporters in the league.

Hard to describe how I feel in Mikel being your coach. I basically grew up following Arteta and Xabi and in the General thread described their friendship, penchant for discussing football tactics with each other intensively off the pitch and then of course him being a born leader and displaying it in over three clubs.

Forget his tactics the man as a whole is very intelligent period from his verbal ability to how he thinks and he always is thinking and is a very respectable character.

Will it translate into results? Not immediate ones as minds like these will not care to impress right away but I would allow yourselves to allow him time as fans given Im already aware how he operates.

I only see his lack of experience and maybe the impatience of the board and/or fans getting him to possibly react away from what he believes. Added with the fact that he has not yet had enough time to further create what is a distinct footballing philosophy.

I predict him a relative success.


he genuinely speaks like a leader. It really does inspire a form of confidence and dare i say hope, but i've been hurt by this club too many times since 2006. So I'll remain pragmatic about it while very kindly and loosely hoping for the best.

Like i said, Arsenal FC is in need of a saviour, we'll see if it is in the form of Mikel Arteta.

He was working on the fundamentals of body shape and receiving a pass knowing what's in front of you. Thought it was funny when he told Lacazette he couldn't flick the ball. Also pulled up Xhaka for not moving after he passed the ball.

The big exercise they were doing was about drawing opponents to one side before switching play.

All pretty basic stuff any good team should be doing, but glad to see it's being worked on.

Its called having a spine. And players have too much freedom nowadays, should be very strict in training enviornment, no phones in the dressing room, enough with stupid fucking tik toks, you imbeciles.

Ornstein: During the training session on Sunday when the players were doing the rondos - quite a few of the Arsenal players were flicking it with a trick to elude the defender and Arteta stopped each time and said "You don't do this during the match, so why are you doing it now?"

Freddie Ljungberg remains as assistant coach and is joined by Albert Stuivenberg. Steve Round is also joining the club as an assistant coach. Inaki Cana Pavon comes in as goalkeeping coach from Brentford to work with Sal Bibbo.

Levels to this game

Looking forward to his Journey. Excited because he seems to be doing what is needed.

Glad to see Hans on board too. Been hyping his footballing mind since before even City. He will fail along the way but bound to succeed though as a coach, not necessarily in the colossal task of Arsenal.

@Arquitecto wrote:Glad to see Hans on board too. Been hyping his footballing mind since before even City. He will fail along the way but bound to succeed though as a coach, not necessarily in the colossal task of Arsenal.

Why you got to say that?

Excuse me if I'm going overboard with this, but this is so evident that there are improvements going on after a few weeks, and that you can see Arteta's work.

- Arsenal keep possession and control games (the thing Emery never could figure out for the life of his, how to control a game). This, of course, also plays to the ***cough** strength of the Arsenal defenders, that they don't have to defend so much.

- also, he's already found a stable starting 11 after, what, 5 games? Already put about the same, or very similar, team like 3, 4 times. And it's a starting selection that makes sense and that integrates the best talent. Özil looking good, Luiz looking great ffs. Only thing that is a bit of a sacrifice is, of course, with Auba on the wing, he's often creating chances he himself would ideally be at the end of.

It's just so funny that, in my feeling, you can sense right away when a coach is doing his job well. The way Arteta is going about it at them moment, there's no doubt about him.

Found this on Reddit. Thought it was a good snapshot of Arteta's tactics so far:

You can clearly see the 2-3-5 shape that both Guardiola and Klopp like to use. Guardiola has both his full backs tuck in to midfield and makes overloads with two wingers and free 8s, while Klopp uses his full backs as wingers to form overloads with two inside forwards. So far, Arteta has used a mix of both, probably to suit Arsenal's lopsided squad. The left side lacks natural wingers (Aubameyang, Martinelli) but has good attacking full backs (Tierney, Kolasinac, now Saka) while the right side has more width (Pepe, Nelson) but full backs who aren't so strong in attack (Bellerin, Maitland-Niles).

The downside is that the right hand side lacks a natural overlap, so Pepe is having to dribble against two, sometimes three, defenders. It's also against his instinct to hold the width and play more as a winger, as usually he likes coming deep and carrying the ball forwards. The AM in Arteta's system tends to play in the right half-space, but that can leave a bit of a gap in the middle. For that reason, I imagine he'll want to transition to a 4-3-3 shape before too long.

This is definitely not me getting at him at all but out of curiosity. When do we judge him?

End of next season?