Any 1 remember this guy

Such a waste of tallent 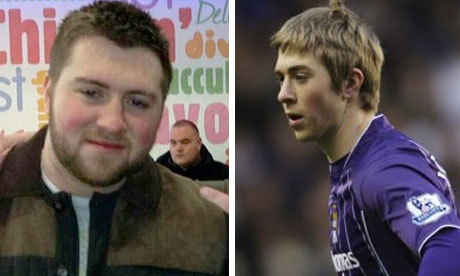 2000 – Starts playing for Everton as a schoolboy.

2002 – Has brief spell at Dutch side Feyenoord.

2006 – Part of the Manchester City youth team who reach the 2006 FA Youth Cup final but lose to Liverpool.

2006 – Makes his Manchester City debut in a 4-0 defeat at Wigan. Called up to England Under-19s and plays six times that year.

2007 – Scores his first club goal for City in a 1-0 win over Derby County in August. Plays for England Under-21s for the first time and is tipped for stardom by the manager Mark Hughes. Picks up an abdominal injury and is forced to undergo a double-hernia operation.

2008 – Returns to action in March in a goalless game against Wigan. Finishes the season with two goals. He suffers a reoccurrence of the abdominal injury and does not return until the next season.

2009 – Plays in pre-season game against the South African club Orlando Pirates but picks up strain in warm-up. Comes on for Gareth Barry in a 3-1 win against West Ham. Scores his first goal in over a year against *bleep* United in the Carling Cup. This will be his last ever appearance for the club

2011 – After recovering from a knee injury the then Leicester manager, Sven-Goran Eriksson, signs him on a season-long loan

2012 – Johnson's loan deal is cut short after six months when the midfielder suffers another injury. He then hits the headlines in May when he crashes his car while drink-driving in Manchester. This is the second time he is caught drink-driving in three months – he is given a £5,500 fine and banned from driving for three years

2013 – Manchester City announce they have released Johnson after years of decline and injury setbacks. They agree to settle up the 24-year-old's £40,000-a-week contract.

Was one of the highest rated footballer in England once. Had so much talent

I remember Sven said he wouldn't swap him for Gerrard.

that's what happens when you shove 40k a week into pockets of a 19 yr old.

Honestly, it's a crime for those talented lads like him or Morrison to piss their career away because they are retards.

If I had that talent and stage was set to become one world's best, I'd f*cking behave

and people still blame Balotelli's attitude.. At least he has a decent weight

A shame, but some people don't have the charasteristics to be a pro sportsman. How he got a 40k / week contract in the first place, I don't know.

damn cant believe it, he's a fat slob now, amazing, too much money. but oh well, at least he is still set for life, anyway, so he is happy. he just didnt want to be a footballer, you cant blame him for that, he is living the life now.

Harry Redknapp wrote:
If I had that talent and stage was set to become one world's best, I'd f*cking behave

I think we all know that that certainly isn't true.

I don't know much about him but based on that timeline it looks like he was hard done by injuries.

Was it also his behavior?

I remember when we was linked with a loan move for him on one deadline day i actually got excited lol.

Was such a great talent and such a shame on how it all ended up for him, not just that but he looks a mess on a personal level even if he can't play football anymore it would nice to see if he could get into some sort of decent shape in the future.

This is just sad tbh.

I know his lifestyle wont help, but im wondering if the abdominal injuries could also have added to his weight issues.

Was just wondering where he has been a few days ago. Remember the time when he broke into the scene. Just glides past players with ease and elegance that most English players lack. What a loss

adriano at inter is still one for the century, even though he it was a little different, it all comes down to the lack of motivation on the pitch

Yesterday at 17:26 by Harmonica