So true.
Drew against United and Liverpool at home.
Lost to Spurs away.
Lost to City at home and away.
Won vs 3-2 vs Arsenal at home but lost 0-2 away.

They definitely beat City at home

Didn't even shake hands with Pep

I'm not sure this is Sarri's fault. They've had like three managers in a row, they all start out good then the squad sabotages itself.

Especially he lost against Tottenham , Arsenal and City without fighting.
You can also lose, but not in this way and if it happens over and over again...
_________________
#TeamVAR

i disagree, his tactics are crap.

One thing to lose

How many of Chelsea players could get into City's team?

And Tottenham?
Is there really so much gap between two teams?

Why are we comparing them to City?

Compare them to Tottenham, Arsenal, maybe even Liverpool or Man U

He's 10 points below Spurs who have barely put out a fully fit XI this entire season and didn't buy a single player in the summer or winter transfer windows. There are no excuses for that
_________________
Beer and guns

Sarri is brilliant but his consistent idealism is and always has been his downfall.

When you do not have the players to play your signature imprint of football, you will be lucky to win any game. In Napoli he did, in Chelsea he does not.

And for Chelsea to suffer as a result of his lack of foresight here, is his fault.

This loss is not a representation of his abilities as a manager, but his abilities to adapt to which always have resulted him in being a second place manager no matter what victories come to amaze us.
_________________

Before the City game, I looked at Chelsea's numbers this season and thought they weren't too bad. They had the fourth best defence in the league and their chance creation is on par with Arsenal and Tottenham. Their position seemed very similar to Mourinho's Chelsea 2013/14 where they have obvious problems in attack. That Chelsea then signed Fabregas and Costa and strolled to the title next season. My thinking was that this Chelsea could so something similar and be competitive next season.

Tbh, the 6-0 doesn't change my view much. I thought Chelsea were a little unfortunate to concede two goals outside the penalty area in such a short space of time. If it's 2-0 I think they keep fighting. At 4-0 the players give up and at that point the scoreline can be anything.

The problem is that if this continues and Chelsea finish outside the top four, Sarri won't be around to continue his project. He and Chelsea don't seem to be a very good match, because Chelsea have always prioritised the short-term and will bin any manager who isn't an instant success while Sarri is the type of coach who needs a couple of seasons to embed his style properly. It'll be very interesting to see if Chelsea back him by revamping their squad or if they'll back the players again.

The fact that leaks like this one are appearing doesn't bode well for Sarri:

Some players have privately started to complain that everything is “too tactical” and that there is now an overload of instructions that they can’t keep up with. Others wonder whether this squad is actually tactically intelligent enough to really learn this.

Will never say to stick by a manager who had his team concede 6 goals in a match, but Chelsea fans should at least now wake up and understand the real problem. The players.  They have some really good players, but the player power in that dressing room is unreal. I mean yea, these days, it’s a prevalent thing and all. But for Chelsea, I don’t know, it has always felt, they have it way more than other clubs.  And the board has to take full responsibility for letting it to get to this stage. The players know now, if they stop trying, the higher ups will fire the manager and hire a new one.  Sarri might not be the answer (Playing Kante, the best DM in the world as an attacking mid, that’s beyond acceptable, whatever the reason and on top of that, his replacement has been dross too). But they simply shouldn’t stop there. Majority of those players should be shown the way out. And the first one’s got to be Hazard.

So, another formerly successful manager fails miserably at Chelsea. Unexpectedly.

Roman should sell the club. Or hire someone who knows what he's doing to run it and let him do it in peace. 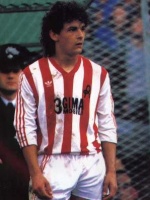 Azpi couldn't do it and Jorginho hasn't played well this year

Tbh if Mourinho, Conte and Sarri all fail with the same mental midgets the squad is in need of a major revamp. Seems like we go through this story every year.
_________________

Hazard had an interview some weeks ago where he said he frustrated Sarri, and his past coaches, and that he would frustrate his next coach too; because they asked him to do more or different things which he isn't willing to do.

The players don't buy into the coaches or the club, they know that they are in charge and that the coach can get fired and so on.

Sarri is the wrong person for the job if they don't want to back his style. But whoever the club choose next, they need to actually support him and shake up the squad.

'I think' Chelsea needs a squad overhaul. Not only these players feel too secure doing next to nothing, they aren't going to get any better either.

Its difficult to follow and understand football at times, I mean certain managers and teams, how can they zip zap like Chelsea this season, and Sarri so highly rated, started so well and than this collapse so soon

That snub to Pep at the end was just unbelievable

I never rated him much when everyone was talking about his Napoli, since whenever I watched him mainly being in the CL, getting raped by Real easily, just werent impressed. But still, especially after the good start to the season, to this, unbelievable.

Roman should sell the club. Or hire someone who knows what he's doing to run it and let him do it in peace.


Sarri is in no way shape or form considered successful. The guy was a nobody before he joined Napoli and hopefully will go back to his roots once he is shown the boot by Abramovich.
_________________


Naah Jorginho wouldn't cut it imho. I'm surprised by how slow he is. He excelled in Italy and their defensive minded, slower paced football. He just can't cope with the pace and physicality of EPL.
_________________

Page 3 of 6
Permissions in this forum:
You cannot reply to topics in this forum
Latest topics
» 2019/2020 Premier League Discussion: Chapter IV

» Best Right Back in the World: Alexander Trent Arnold