One of the few great players that probably no one dislikes. What a legend

This is one of the best goals i have ever seen in my life
ronaldinho's reaction was something alse
thank you andrea pirlo@Pirlo_official pic.twitter.com/Nr0yhaoV7n

Meh I can't be the only one who feels nothing when these legends leave Europe and then Retire 2-3 years later.

It just feels like he retired when he left Juventus to me, felt the same when Henry retired.

I'll remember him for the player he was but it feels so anti-climatic when he's been practically retired for 3 years anyway.

@Great Leader Sprucenuce wrote:Meh I can't be the only one who feels nothing when these legends leave Europe and then Retire 2-3 years later.

It just feels like he retired when he left Juventus to me, felt the same when Henry retired.

I'll remember him for the player he was but it feels so anti-climatic when he's been practically retired for 3 years anyway.

Typical millenials. Making it all about how YOU FEEL. This is not about you Mole ffs

Of course it's one step towards retirement already when you leave Europe for MLS. Of course that dampens the FEELING when these players retire after a couple of years being out of sight.
This is not some great insight of yours that you're telling us.
Everyone knows that.

Thanks you for everything you legend.

Father,
It was much more than I could ever imagined. Thank you! I’m now ready for the next journey. In Jesus name. Amem.

My all time favorite player, loved him to death. Thanks for the memories champ

Last player to win Balon D Or that was not Messi/Ronaldo.

One of my favourite players ever.

He produced countless moments of magic in his prime at Milan. But the one performance I will never forget is the one against United. My god, he was brutal in that one!

I think it's not an overstatement to say that he made Old Trafford quiver in fear in the first leg before single-handedly burying the Red Devils under the ground of San Siro.

An extremely talented footballer of the highest order and another unlucky Brazilian ruined by injury.

He never made his presence felt at the Bernabeu but that's not going to prevent this Madrid fan from standing up and applauding this legend.

One of my favorite goals ever.

^ That goal was one of the many magical moments I was referring to in my previous post.

He won the ball off Fletcher, lifted it past Heinze and practically turned Evra inside out. A beautiful, beautiful goal!

And let's not forget, he didn't do it against Moyes' United or Van Gaal's, he did it against a damn fine Ferguson-led Manchester side, the champion of England back when the EPL was the undisputed best league in the world.

It's such a shame that he got riddled with injuries and couldn't stay consistent at the highest level because, technically speaking, he was up there with the best of this generation.

Despite sucking donkey balls at Real Madrid... i respect his career at AC Milan. Great player. Not in the same league as Dinho though, whom I consider the best player of that generation for Brazil.
_________________

He had some great moments at Madrid too tbf

One of my favorite players. RG knows this well, of course.

Delightful in his prime with Koller at Dortmund.


I would appreciate it if they retired

Respect to Motta. He was the kind of player of I like. Beast in his prime and lasted surprisingly long. The injuries were always unfortunate.

Van Gaal has announced his retirement.

One of the greatest footballing minds of all time imo.

One of the greatest footballing minds of all time imo.

Uli Hoeness wrote:Louis van Gaal is one of the best managers in the world when it comes to pure football knowledge.
In my view, he is responsible for the FC Bayern thoroughly transforming its football. Ball possession, positional play - he decisively initiated these things. Jupp Heynckes and Pep Guardiola then continued with, and improved on it.
We are still profiting from his ideas to this day.
But he's also a human being that's not easily allowing people to come near him; with me there was always distance so we never did get as close as I would have wanted.
As an expert and a professional I continue to hold him in high regards, however, and I wish him all the best for his future, as he's declared his retirement today. 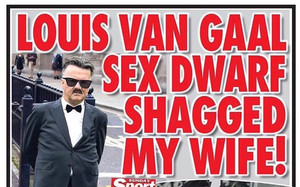