I've put up tables of PL, Serie A (will be updated after evening games), Ligue 1, La Liga and Bundesliga. They usually say judge the table after 10 games when it takes shape. So how does the table after 10 games differ to what you first thought before the start of the season? Which teams have flattered to deceive? which one has been your surprises. At both ends of the table ! 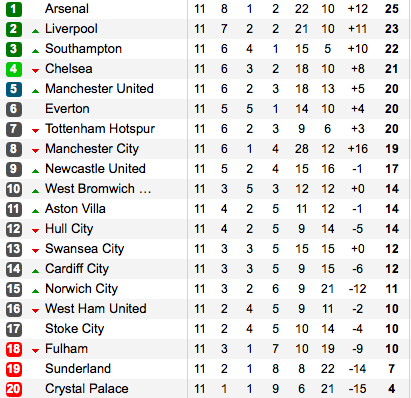 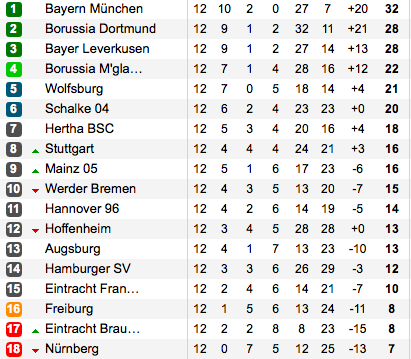 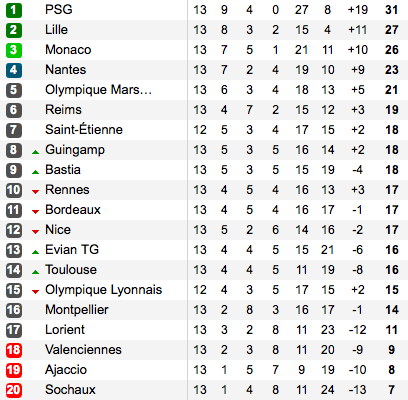 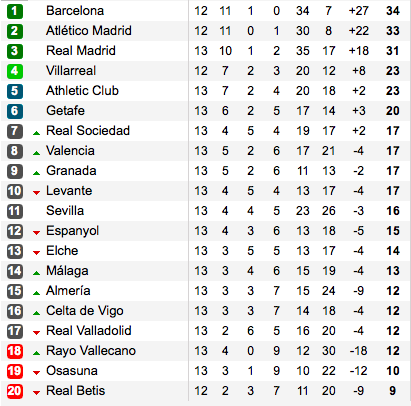 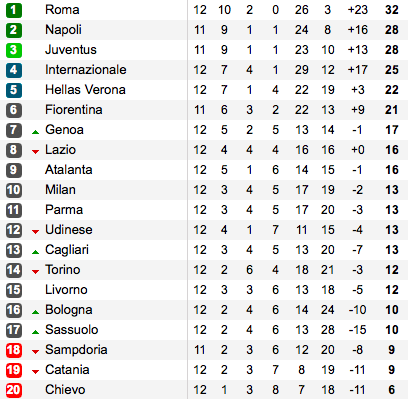 Anyone can tell me what happened to Lyon? Remember when they dominated Ligue 1.

Villareal the success story of the season imo. From promotion to CL places.

Soton are similar to West Brom last season. Got to give credit where it's due, they've been superb so far. Hopefully they can maintain it for the rest of the season. Personally think Southampton they will start to drop off after February as there squad is still thin but you never know.

After 10 games from today, I expect know:
1) Utd will get into the top 4.
2) Atletico will customarily drop to 3rd place.

What's eating OM! They did great last year and had good start this season too. It's not like they have lost some key players. On the opposite note, what's the secret with Lille! They lost their manager with couple of players and still going strong.

1991 wrote:Anyone can tell me what happened to Lyon? Remember when they dominated Ligue 1.

@rwo, do you think BMG is punching (way) above their weight!!!

BMG? Actually they have some good youngsters and if Lucien Favre works as he usually does, he can form quite a capable team. They just need more depth - the same problem all BL teams bar Bayern have.

Liverpool up to 2nd in the league is quite extra-ordinary for me given the relative lack of activity in the transfer market compared to the other teams in and around the top 5.

Also, having to deal Suarez's suspension and Coutinho's meh start to the season and subsequent injury adds a bit more sheen to this result.

Having said that, our biggest test are yet to come, particularly against Everton, City, Tottenham and Chelski, in the next month.
Quietly optimistic that European Nights are gonna be back at Anfield next year onwards

The PL is so competitive this year. The table can change every week.
Guess what the PL has City vs Spurs, LFC vs Everton and Arsenal vs Soton next week.
Every game week is amazing.

We are doing well this year, Still to hit our best. Glad all our players are back hopefully the international break is a success and we have no injuries.

We'll probably finish where we are at the moment and Ashley will party into the night.

Lyon's issue is pretty simple:  New Stadium.  Aulas bought the land and is financing the stadium 100% himself.  BUT, he's basically taking all his money out of keeping/buying players and counting on the academy to carry the club.  That's always going to be painful.  Other than Gonalons, Bisevac, Gomis and Lacazette, that team has either kids or division 2 talent...  they could easily risk relegation if Aulas is not careful.

As far as Lille, Rene Girard took a no-name Montpellier team to their first L1 title 2 years ago over PSG. He was also on the France NT coaching staff of the early 2000s. Knows what he's doing. Good coach.

In BL, the table at the top end seems as expected except Hertha in there, out of the promoted teams someone was going to surprise so it is the team from Berlin and their highly energetic team has got good results till now. They might finish in top 10 by the end of the season.

Eintracht Frankfurt they are not able to cope with European schedule, they are doing good in Europe sitting top of the table at least right now and they will go to the next round. For both Freiburg and Eintrachts doing bad in the BL. It would be good if there is consistency in the top 8-9 so that peformance of German teams in Europe will be more impressive. I can see Wolfsburg playing in Europe in the next season.
The best thing about Bayern is, on off days they still get the results like 1-0, Dortmund need to keep up with the pace.

Man what happened to Gourcouff??

Let's not try to make the unworthy Madrid clubs look closer than they are.

Barca are yet to play Atleti and Villarreal. Table looking good from our perspective

Similar topics
» Gasperini 5 games 1 point vs Ranieri 2 games 6 points
» Judge Eyes
» EPL Table Predictions 2011-12
» Is there any way to judge players that does not rely on relativity?
» Should we judge managers/team less based on result/trophies?

Yesterday at 12:19 by Harmonica