NY Times - Five European Teams to Keep an Eye On

NY Times - Five European Teams to Keep an Eye On

Manchester United won the Community Shield on Sunday, but it’s always winning something. Here’s a look at five European clubs who may be in position to succeed, or surprise, this season. 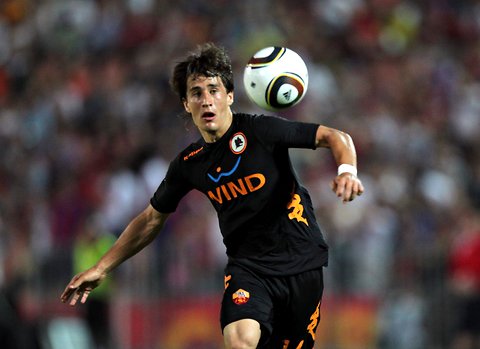 Laszlo Balogh/Reuters
Bojan Krkic is one of the new faces brought to Roma by its Spanish coach, Luis Enrique.

An American goes to Rome. He hires a Spaniard to do a job. While this sounds like the start of a 1970s gangster movie, it is in fact the situation at AS Roma, with the American being the new owner Thomas DiBenedetto and the Spaniard being the new coach Luis Enrique. A household name as a player, Enrique has most recently been the coach of the Barcelona B side, which his former Barça teammate Pep Guardiola coached before moving to the first team. While he has found success in the Barcelona system, the question remains whether Enrique can transfer some Barcelona magic to a less-than-great side in a very defensive Serie A.

There are reasons for optimism. Roma was already playing a much more fluid style of soccer than most Italian clubs. Some, such as Robin Van Persie, have even bestowed the coveted Total Football label on Roma. Also, the club has high hopes for its new signings Bojan Krkic, Maarten Stekelenburg, Gabriel Heinze and the 19-year-old Argentine standout Erik Lamela, as well as for its preexisting focal points Francesco Totti, Daniel De Rossi and Marco Borriello.

However, naysayers will cite the amount of talent on the team’s exit sheet this summer, which includes Mirko Vucinc, Jeremy Menez and the defensive John Arne Riise, along with Totti’s age and an impatient fan base that may rush a vital incubation period.

La Vecchia Signora (The Old Lady) has been down on her luck since Calciopoli, the 2006 match-fixing scandal that saw Juve relegated to Serie B and sent some of the club’s biggest players running for greener pastures. The team, which finished in seventh place last season, underwent an overhaul complete with a brand new stadium to house the new coach and much-changed lineup. Questions remain how much this will all help, though. After all, the club never got the marquee signing it was hoping for, Sergio Agüero, or its second choice, Giuseppe Rossi.

What Juve did get though is a veritable grab-bag of good players such as Andrea Pirlo, Vucinic and Alessandro Matri, and a former Juventus stalwart, Antonio Conte, as a head coach. Also, last year’s poor finish will play to the team’s favor this year as it means no European football — leaving Juventus fully focused on the Serie A. 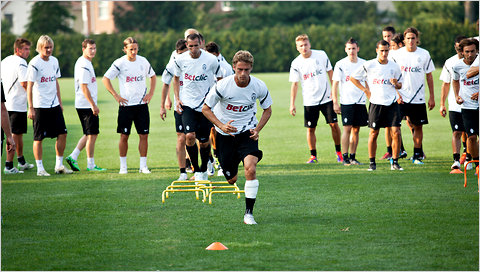 Ryan Collerd for The New York Times
Juventus players during their U.S. tour. The club has a new coach and a new stadium.

There are two big questions: Can Conte install a system that plays to Andrea Pirlo’s strengths as a classic regista, a deep-lying play-making central midfielder? And does this team have the goalscoring talent it needs to take that big step towards returning to its former place as a European title contender?

Arsène Wenger recently called P.S.G. “the French Manchester City,” for its new spending habits, which are financed by Qatari money. However, the Paris side will hope to exude much more team cohesion than the ever-disjointed City.

France was once the proud home of Champagne Football, and P.S.G. hopes to revive the sentiment by building upon its biggest summer signing: Javier Pastore, a young Argentine for whom the team paid a Ligue 1-record 42 million euros. P.S.G. also picked up Menez, Mohamed Sissoko and Palermo goalkeeper Salvatore Sirigu, tipped to be the new Buffon, and has been rumored to be after Manchester United’s Dimitar Berbatov. All of this talent, combined with the offensive mind-set of new sporting director Leonardo, and P.S.G. should produce some entertaining games.

The club remains optimistic despite a 1-0 season-opening loss to F.C. Lorient, a game in which the team played without Pastore. According to P.S.G. Coach Antoine Kombouare, the Argentine will not take part in next week’s match either, as he just arrived in France last week and is being given time to integrate into the team. 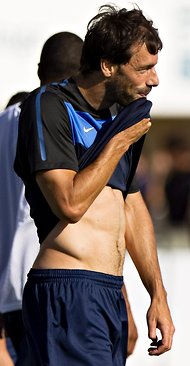 Jorge Zapata/E.P.A.
Ruud van Nistelrooy has taken his well-traveled boots back to Spain.

Another ambitious team with a Qatari bankroll, Malaga was the busiest Spanish club in the summer transfer window.

Malaga looks poised to move significantly up the table in La Liga from its 11th place finish last campaign.

Optimists have it qualifying to play in Europe next season.

Liverpool oozes heritage, and it has been a more talented side than results showed in the last two seasons. Under new ownership, the team has made some major moves. The shake-up began last year at midseason with decisions that began to right the ship: Liverpool unloaded Fernando Torres, picked up Luis Suárez and got its former great Kenny Daglish to come back for another go as manager. Instantly there was new energy and dynamism seeing Liverpool move from the middle of the table to a respectable sixth-place finish.

Not to rest on its laurels, Liverpool spent more money over the summer signing Jordan Henderson, Charlie Adam and Stewart Downing. We also shouldn’t forget about Andy Carroll, who was picked up in January but was injured most of the time, and Joe Cole, who never really got healthy enough last season to show Anfield his best form.

Despite a poor preseason and despite having Steven Gerrard still out from his March groin surgery, expectations are high.

Thanks for sharing Mike

Page 1 of 1
Permissions in this forum:
You cannot reply to topics in this forum
Latest topics
» Most controversial World Cup Golden Ball's since 1966