El Gunner wrote:Draymond out here talking shit with KD about Steve Kerr and Bob Myers in an interview. Woj RTing an old interview from 2019 in which Draymond said the complete opposite from what he is saying now lol.

Draymond for Ben trade might start to gather steam now.

Dray and KD to some extent, came off as immature to me. Or at least they were not keeping it real to each other.

They are painting it as something that needed to happen and if left alone, it would have all turned out fine.

Utter nonsense, KD still would have left and it would have went down the exact same way.

Not to say Kerr and Bob couldnt have done things differently, but KD and Dray especially are painting the picture that how they handled it was the cause of KD not staying.

I really dont like the direction the NBA is heading tbh, the players seem totally unrestricted and basically run the show. Its too much. At some point KD said "we dont give a s--t if Klay missed a practice". There is just something not right about that statement to me.

yea agree with you, very immature, took the accountability and blame of their own issue and placed it onto the management.

At some point KD said "we dont give a s--t if Klay missed a practice". There is just something not right about that statement to me.

i don't recall this part... what was he referring to here in a larger context?

I think Dray was asking about the difficult players KD has played with (himself, Harden, Kyrie, Westbrook) and how people (fans, media) now say Kyrie's behavior (missing games, etc) is the main reason they might not win with the Nets.

KD basically dismissed it, said everyone has issues and Kyrie isnt a problem. Led to him saying when Klay missed a practice, nobody cared. But I have the impression he just used Klay as an example and it could have been anyone.

My problem really is the flippant way he said it and how Dray received it. Basically, as I already suspected, practice is totally unimportant and these players do pretty much whatever they like.

There you go. This contract is super unique:

- firstly there is only one year guaranteed!
- because the guarantee conditions for Y3 have to match Y2, Y3 is basically a mutual option that will virtually never get agreed
- this contract is DESIGNED to be traded https://t.co/jnwhOSxq7z

This contract seems super Team friendly, no idea why Josh agreed to it.

Further more and the reason I'm posting it, it's like nothing I've ever seen before.

The language in the contract is basically saying both team option and player option in the same year which you aren't allowed to do but because of how it's written they can.

Whoever the agents are seem to have done a terrible job.

well i for one think Hart is a 12mil player, nothing more as of the moment.

@Dani, ah yes i get you, because everyone basically loves Klay.

El Gunner wrote:well i for one think Hart is a 12mil player, nothing more as of the moment.

@Dani, ah yes i get you, because everyone basically loves Klay.

More so the fact only one year is guaranteed and is basically operating like 3 seperate 1 year contracts.

It's super unique and not normal at all. He must have been getting absolutely no offers.

Why Celtics are retiring Kevin Garnett's jersey ? I never saw him play yet i know he was a tremendous player

But he spent just 6 years there, 1 championship with a super team. It's not like it's the only chip they ever won although it's been a long time before and since then. Statistically his prime years are with another franchise (Timberwolves)

Seems odd to me, is he that much of a Celtics legend ?

As well as Michael Jordan's number retired by the Heat. And Kobe retired by Mavericks but they never played there.

Good intentions but imo a bit wack. As a contest of who pays the most respect.

Because he was a great player for them, don't overthink it.

Also the only reason the Timberwolves haven't retired his Jersey is because they're a shitshow of a franchise.

What's going on with Zion

I know Pels aren't really the best run franchise in the league, no offense Mole altho you know it more than anyone, but it feels way too early to have some of this noise. Zion's hardly done anything in the league yet.

Probably frustrated the way Morant and LaMelo started their career, they have an immediate impact on the league in small market teams with promising rosters, they already got somewhat serious results. And the hype that goes with it.

Zion himself did not publicly say anything, i think, it's a journalo who came out with this story.

Zion stuff started before he was drafted lol, his family never wanted him here.

Explaining everything would take several posts lol, it's not really simple.

But two key points, he doesn't really have a relationship with David Griffin and he was miserable under Stan Van Gundy.

If we start winning more and he's still miserable then that's a problem.

But it's important to mention that winning solves a lot of things in the NBA. A year ago Phoenix and the Knicks were considering a laughing stock.

So that's what I'm personally focused on, i just want to see a winning product and don't really care about anything else.

Wiggins doesnt want to get vaxxed, Chase Center has a rule that everyone who enters it has to be vaxxed. Although, here's the kicker, anyone else from another team who isn't vaxxed can play as long as they provide a negative test.

Simmons has gone cold on Sixers and his teammates, Embiid and a few others wanted to go visit him in LA to talk out the situation, but he told them they shouldn't bother.

The lunacy of it all was bound to spread to the NBA, the most woke league in all sports.

Don't want to turn this into the covid thread, but it really is as illogical as it gets.

The Wiggins situation makes no sense

As for Simmons, embarassing behavior, this guy cannot take criticism although he's the main responsible for Sixers problems. The way things are going, it's impossible to get decent value in return, eventually he will get traded to the Kings for Buddy Hield and Marvin Bagley imo.

don't be surprised if Wiggins for Simmons happens now

as of now, it's similar rules for New York teams, and i heard rumblings that a few Brooklyn players including Kyrie aren't vaxxed (yet) too.

Well, Kyrie not allowed to play for the Nets as they have banned him.

I hope this turns into his retirement, so we don't have to hear about him again. Maybe start a cult with Kanye, they should get along great.

Finally some actual sense has been reached.

Glad Nets put their foot down.

so without Kyrie where does that leave Nets championship contending wise?
a better shooting version of OKC 2016? but maybe not as tough, and now the lack of a good 5 and 4 might be exposed more?

They're still better than everyone else not called Milwaukee. 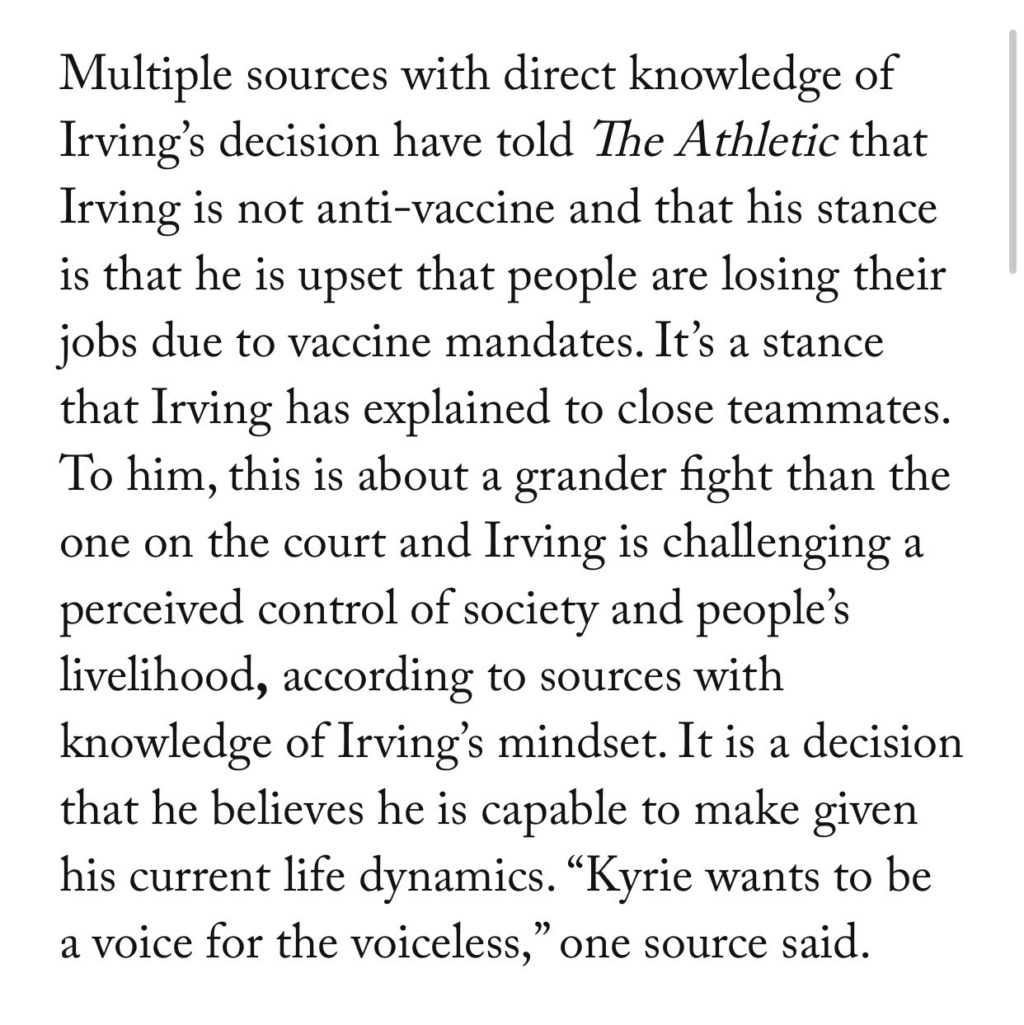 Kyrie is on Cloud Cuckoo land

A voice for the voiceless is a pretty uhhh...interesting way to put it

he wants to go into socio-politics... it's so obvious. I'll never understand people who name-call people as "crazy" just for having anti-mainstream views. Let the guy do what he wants to do, it's his life.

Great Leader Sprucenuce wrote:They're still better than everyone else not called Milwaukee.

disagree... they are just amongst the contending pack without Kyrie.
They certainly won't beat us in a 7-game series

I've no problem with anti-mainstream views, but the things you say have to make at least some sense, otherwise I might indeed think you're crazy - or just very stupid. Kyrie refusing to get vaccinated out of solidarity towards other people who refuse to get vaccinated, I can't get behind that at all. A) the vaccine is the way to beat the pandemic and save lives and b) unvaxxed people will continue to be a selfish burden and cost to healthcare as some of them will require hospital care when they get sick. Refusing the get vaccinated for "social justice" reasons is a crazy weird hill to die on.

A guy who likes to create narratives with a background of social justice and religious folklore. Him and Kanye West probably drink the same juice.

As for the Nets, i have them top 3 in the east, assuming both Harden and Durant are healthy for the majority of games. In frontcourt they signed veterans who can defend and score, an improvement in this regard. The backcourt rotation is now questionable but it's not their fault.