It's crazy how Tifo Football disabled the comments on their Cristiano rape video, but Benzema blackmail video comments are online. 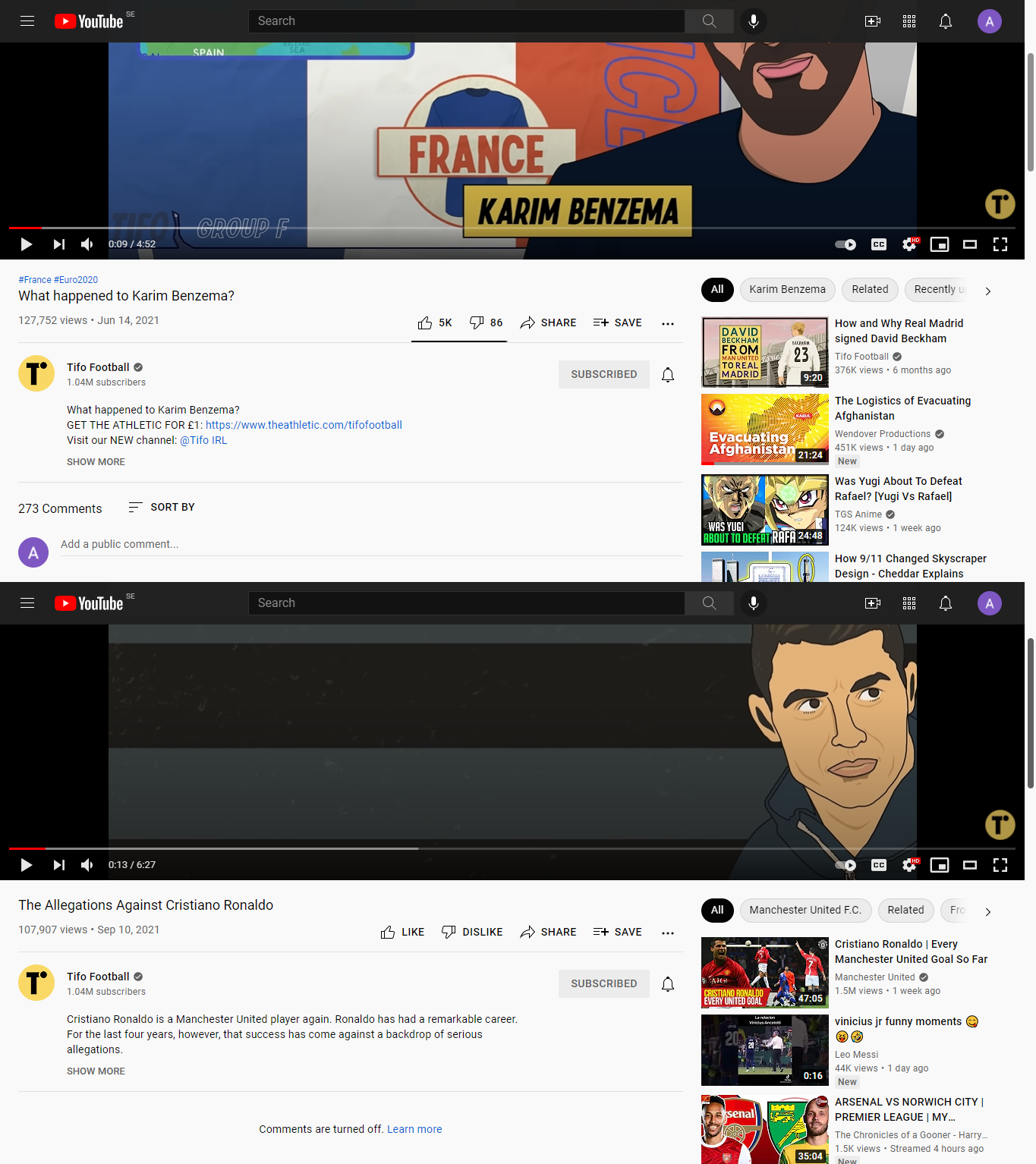 And now he's handed in a transfer request to leave.

I think Chelsea will end up signing him

It's not cause of lack of CL. It's cause of Ten Hag. He's probably realised that they won't be compatible hence it might be better to part ways. And I agree.

The great Cristiano Ronaldo won't like being ordered by a demanding hipster small club coach.

he can bend the knee or leave, not to chelsea though, ship him to bayern

danyjr wrote:It's not cause of lack of CL. It's cause of Ten Hag. He's probably realised that they won't be compatible hence it might be better to part ways. And I agree.


It's a combination of both probably lol. CR is mister champions league, so naturally he wants to be in an instantly competitive team rather than part of a ground-up rebuild at this stage of his career, ain't got time for that. I think he'd stay if they were in CL and had some chances to win it

would love to see him at chelsea

Mount in the pivot when you have Kovavic and Jorginho

CR and Bayern would be a good match, especially of they lose lewa

Lol, so he jumps ship again, just usual stuff from this egotistic selfish drama queen. Lets see if any more top tier clubs are willing to take this old man, otherwise just have to accept he belongs to Europa League now, or goto MLS or ME somewhere n start semi retirement


Just saw this while sitting in the office and laughed hard and now everyone is staring at me.

Okay as much as I love Cristiano he has a severe tendency to make everything about himself.

The drama he caused at Real Madrid because he wasn't "loved".

Then his insane timing to leave Juventus then after just ONE season he does it near the last moment in his boyhood club in Manchester United, whom we all know he never really gave a shit about nor was it his desired club.

Ronaldo has immeasurably grown but he still is very self-centered.

Can't help but feel bad for United fans where not only their superstar has embarrassed them but CR has proven to be bigger than United themselves don't @me.

RWO was a huge proponent to this and would be nice to see her return and rant about it.

So...hoping he goes to Bavaria.

Cristiano Ronaldo given 'indefinite leave' by Man Utd with star spotted in Portugal after missing training for 'family reasons' https://t.co/Bto4HupmvD

akin to Bale missing our preseason to "clear his head"

time for Yung Martial and Rashford to come good

turns out Mendes is also Kounde's agent, man has fingers in every hole ffs

Meh. If he stays, he stays ofc he will help with some goals in some games, but if he doesnt want to, just go, couldn't care less. Overall the team will improve I am sure, even if the conversion reduces without him.

Ronaldo using madrid's tabloid to position himself in the market


Barça do not want Cristiano Ronaldo. The only option is Lewandowski. Laporta and Mendes talked about Bernardo Silva and Koundé in today's meeting.

Mr Nick09 wrote:Atletico would have gone for him if Griezmann wasn’t on their books

Ouch, i can visualize the conflict between Ronaldo and Simone!

Know exactly how this is going to pan out.  Mendes will try to pimp him out everywhere but no one would be willing to actually pay what they want. It will drag on and on and on. United after failing to secure De Jong and whoever TH had asked for, will announce on deadline like a new signing, that Ronaldo is staying.

Mr Nick09 wrote:Atletico would have gone for him if Griezmann wasn’t on their books

they cant afford him even without griezman

^ Even if they could afford him, he wouldn't join them. Not even in their wildest dreams.