Shaw and Maguire are the gifts that keep on giving.

Nishankly wrote:VVD out for 7 months? EG has got his wish xD

Nishankly wrote:VVD out for 7 months? EG has got his wish xD

Its the only you can achieve something or 3 points, so might as well thank him for that.

Maguire (c) with a true captain performance. Locking down the armband and starting spot for years

team looked pretty mediocre despite the 4-1

El Gunner wrote:remember all those bullshit calls Liverpool got last season due to VAR or lack of VAR, yup, karma is a bitch and it's either a 10 or slobby fat nympho, no in-between

long may it continue. Long may this Arsenal keep getting more fans like EG so that Arsenal can being a pussy team. I agree with you 100%

that fall-off coming in sharp with VVD's career being ended by Pickford, i hope you enjoy misery again because it is around the corner

Ffs EG so heartless. Either way I can never be at your place to wish a lot term injury to any player but that's just me.

If you didnt captain him in fantasy then shame on your ass.I might break 100 this week.

This league season is so damn weird that I wouldnt be surprised if Spuds and Everton gonna compete for the league. Especially with the latter not being in Europe meaning more rest for their impressive looking first team. Coincide that with Jose usual second season high meaning the idea is not that farfetched

Nishankly wrote:Ffs EG so heartless. Either way I can never be at your place to wish a lot term injury to any player but that's just me.

He was an okay kid which unfortunately has reached the scum territory now.

There is one thing to troll for "banter" (he's still a teenager after all), but It's one thing to wish long-term injury on a player (which he did on twitter) and now cherish it once it's confirmed.

He's crossed the line and he's now the official enemy of all Liverpool fans and players and staff. I will be treating him as such from now...his mentality towards us is AKIN Hitler was against the Jews.

We must fight tooth and nail. I propose creating an LFC Mossad to combat his vile ideas and evil plans.

Nobody cares if EG wishes that against van Dijk given it comes from a place where his club stands to ours. It wont make a difference who wishes what on whomever especially given it'll be even further satisfying to see van Dijk come back and respectively shut Arsenal out.

El Gunner wrote:that fall-off coming in sharp with VVD's career being ended by Pickford, i hope you enjoy misery again because it is around the corner 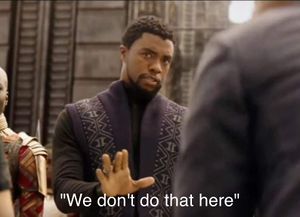 El Gee cutting some tremendous promos ffs. @Real Hunter mah boi deserves a push and he better get it.

This is the barclays.

The greatest league in the universe.

Page 1 of 40
Permissions in this forum:
You cannot reply to topics in this forum
Latest topics
» Champions League 2022/23 | Group C