I know what you mean and I think with the ball coming forward that is good, but not without it nor at that particular moment. That to me is too dangerous, especially when you play on the sides of the back 3.

With the ball he can drive into space and force another opponent out, which can open the space for others in the middle.

That to me is what De Jong does exceptionally well when he plays as a defender. He can drive forward and commit players to him, which in theory opens up more spaces for others.

Or, even the deep runs if we have already established long spells of possession in the opponent third. When you do that you can surprise the opponent because they hadnt accounted for your presence.

But what we did yesterday and has done on occasion, I really dont like.

We had not established control in the final third at that moment, with 20+ pass sequences and keeping Getafe stuck inside their own third or half. Instead, he went forward on a random counter attack with no chance of any cover.

Was it a little harsh to go at him? I dont know, if you want to take into account the season he has had sure but I dont really see it that way. Again, perhaps I am siding more with Koeman than most because I have been in the same position and done the same thing.

I cant compare Xavi and Busi in that. Its impossible. That pass yesterday broke 3 separate lines of players, that is Xavi written all over.

Great week all around for us. Win a tough away game against Villareal. Atletico and Real drop points. Couldnt have asked for more. Incredible that we are in the drivers seat after the first half of the season.
Tremendous second half of the league season. Thought we had all the momentum coming into the Clasico and should have won. Having lost the Clasico, I expected us to lose the Cup and whimper out of league contention. We won the Cup handsomely and keep winning against the fodder while our rivals keep faltering. Now the momentum is again with us.
If we win the league, would be a great story and sets us up for the future as well. Lets not forget that we have played the season with a bunch of teenagers as starters and first options off the bunch. They have all had to mature fast and winning the league would give them the next step up. Setting us up nicely for the future.

Messi had a chance to score first hat-trick of the season against Getafe and keep the streak going. Gave the penalty to Griezmann to up his confidence. Next game Griezmann scores two vital goals. That's what the greatest of captains does.

Captains lift up the team when going gets tough and the team struggles. Giving your penalty away to someone else at 3,4,5 up is not heroic behavior.

It is such an insult to legends like Puyol to call Messi a great captain. He was never a good captain neither with Barca nor with Argentina. You can atleast admit that, he doesnt have to be the best at every damn thing for your bizzare satisfaction.

In big games it is crystal clear we have no leaders. Betas like Messi,Alba,Busquets arent leaders. That why we lose vs RM and in CL. They are mentally stronger.

It's insult not call Messi a great captain. What he's doing with bunch of kids and chokers is beyond whatever captains we've had previously. He's got players like Dumbo who choked hardest I've ever seen anybody choke against Liverpool, yet Barca continues to challenge for the tituleros. Same applies to Argentina, continuing to challenge after Higuain, the biggest choker in NT-football missed three 1on1 winners in three finals. You probably blame Messi's captaining for these misses.

Then again you're one of the three amigos, so you'll never admit anything.

Messi is not in the same class of leadership as Puyol, Luis Enrique or Pep.

Those 3 have been the stand out captains of my time and Messi, 3 seasons (I think) in as the official captain has done nothing to warrant the type of praise those before him have been shown in this area.

Which by the way is fine. Not everyone is a great captain, not everyone is born to be that kind of personality and admitting it is only logical at this point.


Anyway, difficult win but we got over the line. Id say that was the 2nd toughest game to go, with Atleti obviously being 1st.

as much as I love Messi oftentimes when going gets tough this is his response as #1 captain: 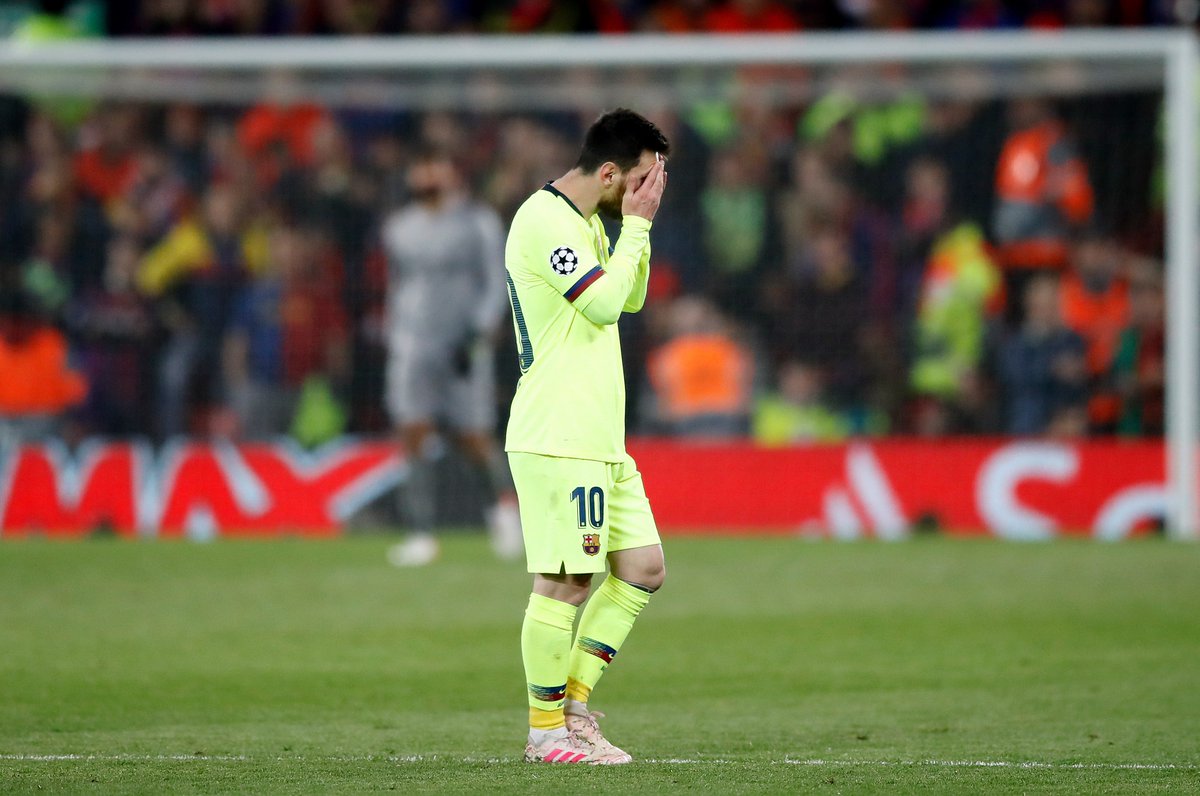 He is just mentally not a leader and THAT'S FINE.

Being a good player =/= being a good captain. All those embarrasing exits from CL are due to lack of leaders, because the footballing quality wasn't always that bad. And that goes not only for Messi but for many others too. Sergi Roberto is one of our captains

The only one with leadership skills on the team is Pique and even then he's not always at his best and on decline although I still consider him our best defender overall.

Madrid plays shit football but they win big games because they have better mentality and more leaders. On the other hand they lose more points Vs weaker teams. Many variables play into that, though.

Agreed, which makes me wonder why he is selected to be the captain both at Argentina NT and Barça.

Its not because he is mentally weak, its because he is not used to lose, same goes with all barca players. They are used to be the best, always winners, world beaters. Suddenly things change and they are all in shock. Being leader takes time, takes many loses and struggles. See how Madrid is strong mentally now. But they used to be mentally weak, giving up after barca scores a goal and conceding 4-5 goals afterwards despite having great leaders like Casillas and Ramos, but nobody called them mentally weak

Current Barca is in the same way, they are getting mentally strong with each humilation. I can see it. If you dont see it, open your eyes

Also probably captain Puyol had more loses than captain Messi. Great captain doesnt win matches, great players do. Actually in todays football coach is enough. what does captain do? screaming and clapping hands work for the first few times after that players get used to and it has no effect. Latest CL winners had no great captain, actually nobody knows who their captain was. But teams with great captains won nothing. Roma with Totti did nothing in CL, but without him they humilated barcelona. same goes with madrid without ramos vs barca. Coach is the most important figure here, and its his job to encourage players

I dont say messi is great captain, he is not a captain material. but they throw captain armband at him, mascherano was the captain, and messi was happy. but they decided to give it to messi. It must be political decision or something. Anyway my point is that captain thing is useless in modern football

@danyjr wrote:Agreed, which makes me wonder why he is selected to be the captain both at Argentina NT and Barça.

his status as best in the world demands it, even if he is not suited for it

In Barcelona players vote for captain, who they look up to. Don't know how that works for Argentina, probably coach chooses the best candidate. And there's no-one better for either of teams.

Knew the fairytale comeback to win the league was probably too good to be true. Bunch of mental midgets; crumble under the slightest of pressure.
The seniors need to be thrown out, the lot of them. Else they will corrupt the promising youngsters on our team with their loser mentality.

Lol at the captain material conversation.

All in favor of throwing the match vs Atleti?

Well, we may not have to throw the match. Given the team is full of mental midgets, I see us easily losing.
But yes. Madrid wont lose. They are a champion team full of winners and I am positive they will win their remaining games.
Better Atletico than Madrid winning. Any day of the week.

with CL games in between. That's a tough schedule, they'll lose points.

Time and again over the past few years we have failed when it matters vs Atletico, it will be intriguing to see if we can beat this again this time round. Basically if we manage that we will win the league pretty much. How the stars align resulting in such circumstances again, amazing. We are good enough to do it, but we will definitely need to play to our best and take a lot of risks. Koeman has done well lately until the past couple of games, if he selects Roberto again ahead of Dest I would wanna kill him. Dembele also should be back so thats good.

How good is FDJ?
Has 4 lungs, immense technically, great running with the ball, great defensively and now great in the opposition box as well. His runs into the box have been immense for us this season. Once more with a vital run and play into the box which led to the Griezman goal.

@alexjanosik wrote:How good is FDJ?
Has 4 lungs, immense technically, great running with the ball, great defensively and now great in the opposition box as well. His runs into the box have been immense for us this season. Once more with a vital run and play into the box which led to the Griezman goal.


Average according to gl...

Another well fought "final", despite defense leaking easy goals every game even with 5 on back, Messi is whipping the team impressively.

Busquets must be on trt. He needs testing immediately. He is performing amazingly well.

But the team in general, simply annoy me. After every game, I feel alot of regret as to why I didnt use the last 2 hours in a more productive fashion than watching this group.

Every game will clearly be a struggle, full of unconvincing performances.

We know it but we keep doing it

As for Busquets, yes really surprised by his prolonged resurgence. Read somewhere its due to the back 3 meaning hes more free to focus what he does best but who knows... I guess its a good thing if he can prolong his level for another season or two, until we can fix out finances hopefully and then go sign a real replacement, etc.

We really need consistency infront of goal. I can only imagine if Fati wasn't injured maybe we'd be ahead in the league.

Cannot disagree, but you shouldn't really be counting on an 18 year old when you've spent €400 million on attacking players .

In fact nobody should count on an 18 year old to give them results. It is too much pressure.