Add to this selling all the deadwood. We were helped by Spurs with Bentancur and Rangers with Ramsey, but Ramsey will return and then there needs to be buyers for the rest.

I hope this summer we'll stop seeing Alex Sandro. He doesn't irk me as much as Bentancur used to but enough already, he is past it.

Udogie, Bremer, Sergej would be excellent to start with if possible. Bremer looks Inter bound, don't know if Gatti is good enough. Pogba may be more likely than Sergej, still hugely better than most of our midfielders anyway. A couple of the youngsters we have in midfield should return, I guess Miretti and Rovella or Fagioli. Not a fan of Di Maria signing since he is so old, but if its a short contract then sure. It seems like one of Zaniolo or Raspadori might join.

We can only loan or release Ramsey. Nobody in their right mind will buy this expiring contract. Arthur, Rabiot, McKennie are on the market i'm curious to see the offers we receive

I would sign Di Maria even if he's old since we desperately need someone to feed Vlahovic in final third. A forward to replace Dybala is the basic of our next mercato, might as well seek short term solutions because we also need a DM and a box to box who don't panic under pressing. In fact in summer 2022 most of the transfer budget should be spent on 2 quality midfielders.

In defense hope we convince De Ligt to stay one more year mostly to buy some time, we can replace Chiellini with a serviceable veteran a la Acerbi but i don't like the idea of signing 2 new CBs. Ideally we find a new pair of full backs, however it seems more likely that at best we'll sign cheap prospects and loan them out immediately meanwhile old guys Danilo and Alex Sandro remain in the starting XI.

Di Maria almost done deal. I read the salary is around 7-8 millions net on a 2 year contract which is ideal length

Welcome to the club

Replace Dybala: check
Now comes the bulk of the work we must sign quality midfielders. Unless Di Maria is used deeper in the midfield, it would not be the first time Allegri tries this (hope he won't)

Pogba and Di Maria are almost close to being finalized

There is talk of swapping Arthur with Arsenal's Gabriel... How has he been this season?

Bernardeschi is leaving. Perisic is being talked about as a replacement

Don't know why we are targeting so many old(free) players. Either we super broke or we are planning to invest money in other areas.

Starting XI without Chiesa could look something like this next season

What a terrible team

Danilo and Pellegrini? These guys wouldn't start for the top half of Serie A. What do these guys even offer in attack?

Its such a typical Allegri-type of side, football has changed. The top 2 in Serie A boast some of the best wingbacks in Italy, maybe even in Europe. And here you have donkeys as fullbacks.

Locatelli is this generation's Montolivo, guy didn't even start in the Euros bar 1 group game, but Juve fans were clamoring for him last summer you'd think he was prime-Iniesta

It seems everyone has forgotten Szczesny's horrible first half of the season, if he stays as the starting keeper. Juve are in heaps of trouble.

Bonucci and de Ligt, an injury prone, mistake prone, 35 yr old on his last dance and a mistake-prone, mental midget of a CB on the eve of renewing on a 400k p/w contract. Nice.

Juve needs to be humble with the quality of their squad.

Besides too much instability within the management. Agnelli is a clueless clown without Marotta holding his hand. Allegri and Nedved are not exactly on good terms either.

Pretty much similar to United’s situation except that we play in an utter trash league and we can weasel our way through to CL spots despite playing horrible football.

It will take a while for us to be successful again.

Pogba, Di Maria, Perisic for free is a great start. The difference of salary vs the player they'll replace is negligible. Must use the remaining budget for another midfielder

What a flop Kean has been which is a shame. Not sure what the future holds for him we saw glimpses of interesting potential but he earns too much for such low impact. To think we consider keeping Morata is a bit disappointing. Pjaca is coming back in july lol we might integrate him to the forwards rotation replacing Berna for free.

Calma that team S wrote is better than Milan's and is missing Chiesa as well.

end of an era with Chiellini off to MLS, legend

genuinely surprised you're apparently bringing Pogba back, look, as far as I'm concerned the guy is a massive fraud at the top level, but I also think that he loved his time in Italy (beating on jobbers) and that his move back to United was purely financial, I suspect he'll find enjoyment in Football again for you and do very well, imagine he's on silly money though and I doubt he's going to elevate you up a level, so eh.

Chiello is a legend and a role model, he is Juve in person. Taking a few years to enjoy the californian sunshine then he will integrate Juve board in a very high role. Wish only the best for this guy. I'll try to meet him once his team passes in my city.

And yeah thanks Man Utd for ruining Pogba with your sandlot tacticians, playing him DM and what not. He comes back with uncertainty regarding his level which is something we can afford... look at our midfield ffs most of these guys don't even deserve to wear this jersey. Slobs like Arthur don't have half of Pogba's talent.

Report claims 3 years around 10 millions salary. But no transfer fee so overall it is a very cheap transfer by today's standards.

Juve wants Muriel as back up, price tag is 20 millions. Still waiting for developments about Di Maria and Pogba. That would be a decent start.

As for Perisic he is now linked to Premier League clubs and loves Inter, probably not coming.

Wtf is taking so long all the time though

Welcome back i am very hyped... for now

Paul Pogba to Juventus, confirmed and here we go! Full agreement now completed on a free transfer. Deal to be signed at the beginning of July, it’s done and sealed.

Pogba will be in Italy in two weeks. Juve sold him for €100m six years ago - now he’s back for free. pic.twitter.com/YNyyOlmSUE

I'm hyped to see Pogba in our shirt again. Convinced that, injuries permitting, he'll be a success here again.

he's a bum, good enough for Serie A though

Good enough for the euros and the world cup too, United is a bum club. It's clear it was the wrong situation for both parties. Let's see if he can bring his level back consistently.

De Ligt wants OUT we probably sell him to Chelsea. This SUCKS with De Ligt gone we'd need 1 mid, 2 CBs, 2 forwards (not including Pogba)

The new directors Arrivabene and Cherubini seem to have a more cohesive vision and structure than Paritici. A lot of undoing last years mistakes in these windows and bringing the club to a more financially healthy place.

They also speak of making a squad that makes sense and to work together with Allegri to built something for his needs. Paritici usually signed good players but without a strategy and it ended up with a bunch of players that can't really play together. Lets see if these guys have a good sporting vision.

They've signed Vlahovic, Zakaria, Pogba, Di Maria, Gatti and are rumored to sign Cambiaso and Zaniolo. As well as recovering Fagioli and/or Rovella. 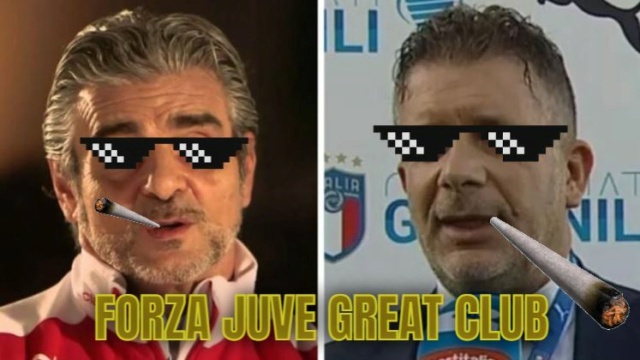 The transfers make sense at the moment they make the deal, i just hope to see results on the field soon enough. For example i was glad to sign Kean and Locatelli and it was clever to delay the payments. Sadly their last season was fraudulent. Pogba and Di Maria is a very good start for this mercato.

Rabiot is wanted all over Europe no troll. Not sure what they see in him, anyways it's not like we haven't tried he got plenty of chances and never delivered, i read swap vs Naby Keita is a possibility. Gone this summer in my opinion and so is Cuckthur. We need one more quality CM and the CB position must be adressed, even without selling De Ligt this is way too light.

Thoughts on our new player Cambiaso ?

Looks good, plays with both fit and can attack and defend. It seems he is going on loan to Bologna though.

Seems we could overtake Inter for Bremer

Page 16 of 19
Permissions in this forum:
You cannot reply to topics in this forum
Latest topics
» 2022/2023 Premier League Discussion

Yesterday at 1:53 am by Winter is Coming