Keeping up with a summer tradition of Juve's summer squad look in.

Similar to last year the squad needs rejuvenation, the main problem area is, again, the midfield, but otherwise there are new areas of focus. The main focus is the continued rejuvenation of the squad. In terms of positions, CM, CF, RW are the three big ones to address. Before anything is addressed too much though, the club needs to sell. Covid disappeared the budget and forced a different format of deals, with big swaps being proposed.

GK: Szczesny, Buffon, Pinsoglio.
Szczesny was perhaps the GK of the year in Serie A. Buffon played a great season in his limited number of games, even as our best player in the Coppa Italia final. Pinsoglio is club grown. Nothing to touch in this department.

CB: Chiellini, Bonucci, De Ligt, Demiral, Rugani, Romero.
No singnings needed here as well. Bonucci returned to his best and De Ligt showed his incredible level after a rough adaptation period. Chiellini (normally our best CB) and Demiral (who had become a starter) return from season ending injuries. De Ligt just had shoulder surgery so he will miss 3 months. Rugani's Juve career is done. He has 0 confidence. When given a run of games he was fine, but as a back up he is completely unreliable. Romero should preferably be kept and Rugani sold.

FB: Cuadrado, Alex Sandro, Danilo, De Sciglio, Luca Pellegrini
Cuadrado was great as RB, Alex fell off a cliff after Covid. De Sciglio looked good until he got a long injury, Danilo was fine as a backup. The main question here is: replace Alex or replace De Sciglio? That dictates the level of LB to get. If Alex is trusted for another season, the move seems to be to sell De Sciglio and for Luca Pellegrini to stay.

CM: Pjanic, Matuidi, Khedira, Ramsey, Rabiot, Bentancur, Arthur
Matuidi is finally sold, 10/10 mercato. Pjanic having declined, is swapped with Arthur. Now we need to sell/release Khedira and maybe Ramsey. Bentancur and Rabiot impressed this season so at the moment are going into the season as starters. Big expectations on Arthur.

FW: Ronaldo, Dybala, Higuain, Costa, Bernardeschi, Kulusevski
Ronaldo and Dybala were our POTY by far. The club wants to build on both. The only issue is that Dybala hasnt renewed his contract, the negotiations have been going for a while to increase his salary and confirm for many years. If this fails, as some are claiming that Dybala is asking for unreasonable amounts, then we are in for an unknown makeover in attack. Higuain needs to be replaced. Costa is just plain unreliable with his injuries and Bernardeschi had a really disappointing season. One of these two will leave. Kulu looks amazing, Serie A Young POTY.

As far as I know, we are mostly linked with:
Locatelli, De Paul, Aouar, Tonali
Milik, Raul Jimenez, Lacazette

Basically to a rotation CF to replace Higuain and a young midfielder. Chiesa and Zaniolo (usual links) seem out of reach for the moment, we'll see if anything changes.

Mandragora will return as his signing was already agreed regardless of his torn ACL. The injury ruined Mandragora's, Juve's, and Udinese's plans. I guess we will have to see how and when he recovers.

Thanks for this brother rincon

Last I heard, Romero linked to Atalanta and I am think this could happen with Rugani retained as 5th CB. Although, as you said, I would prefer the other way.

Douglas Costa is being shopped. Issues with Higuain and Khedira’s wages and the ability to find clubs to take these on (go figure).

Various speculation about Bernardeschi. From what I read, he wants to stay and Juventus have evaluated using him in swap ideas. He was unplayable this season and not in the good way.

The other project is Dybala’s renewal. This should be priority.

Still curious on Ronaldo and want predictions from the best of Juventini on his future because for me it seems more and more likely he is to go either by his interest of Juventus indeed wanting to release his wages.

Ronaldo isnt really part of speculations. After the season ended the club said he was a pillar, he said he something about wanting to win the scudetto again next season or something like that.

He isnt really part of the media's rumours in Italy either.

The one making noise is Dybala with his un-renewed contract.

If Ronaldo does leave it’s definitely a signal of a larger revolution with the team and it’ll be a shame if that happens. For the time being, Ronaldo is committed and I don’t expect we’ll lose Dybala either.

Odd amico given he is speculated on most sources for his departure but when it comes to transfers I'm the worst so relying on you and this thread for further news.

Ronaldo staying for me will be a crucial factor in Dybala leaving or nkt.

After Matuidi deal with Inter Miami completed for free, Juventus have decided also to terminate contracts of Higuain and Khedira. They're out of the Pirlo project.
Talks on to find an agreement on the payout (both have still 1 year contract left with Juve). #transfers #Juve

From the impression I have of Pirlo's general ideals since joining as manager he has a clear vision of what he wants and does not want and is ruthless about it.


Like Xavi he is one for modern attacking football that too is clear so seems Juventus don't have a provinciale bum on their hands. A given since Pirlo is from an illustrious family and generally classy.

There is an enthusiasm to write "Pirlo" on every Juve news. Pirlo doesnt decide our transfer strategy, no coach at Juve does and that hasnt changed in a week.

these deals take a bit more time than that.

Matuidi, Higuain, Khedira arent part of the Juve project anymore, it's been known for a while.

About damn time we release them all

Thanks for the good services, of course

you do know that this will not end well right?

you do know that this will not end well right?

Corsport: Pirlo has called Nesta after his last game with Frosinone. Andrea wants Alessandro as his assistant manager pic.twitter.com/CSoTT3nGJ4

At first thought, I was completely against it because of his age obviously but on second thought, he could be a decent short term option until we get the chance to activate Haaland's release clause. Let's be honest, we have an advantage compared to other clubs because of Raiola. And also if this means having room to invest in other areas of the squad, especially midfield, I'm all for it. I'd certainly prefer this option than spending €40M on Milik who is coming off a serious knee injury.

Arquitecto wrote:Odd amico given he is speculated on most sources for his departure but when it comes to transfers I'm the worst so relying on you and this thread for further news.

Until his friend, Edu Aguirre, or Luca Fausto Momblano say something about this, there's nothing to talk about

I am down for Dzeko he's a reliable goalscorer. It seems our problems are being adressed, as if the pitiful end of season was a wake-up call. I saw a list made by Rincon i think, of players linked to us and it was credible names.

We can still sell Bernardeschi and Rugani, keeping them any longer would be a waste of funds. This "summer" we have a long to-do list

Pirlo as coach is growing on me, after all it cannot be worse than Sarri who was a foreigner to the club. For the xth time, Ronaldo leaving are false rumors. Dybala's new contract will be ~15 millions salary from what i read.

We’re in for one of Locatelli, Partey, De Paul, with Locatelli being priority.

Barca are about to terminate Suarez' contract

Would you guys take him on a short term 2 year contract ?

The plus point is he'll be free unlike Dzeko 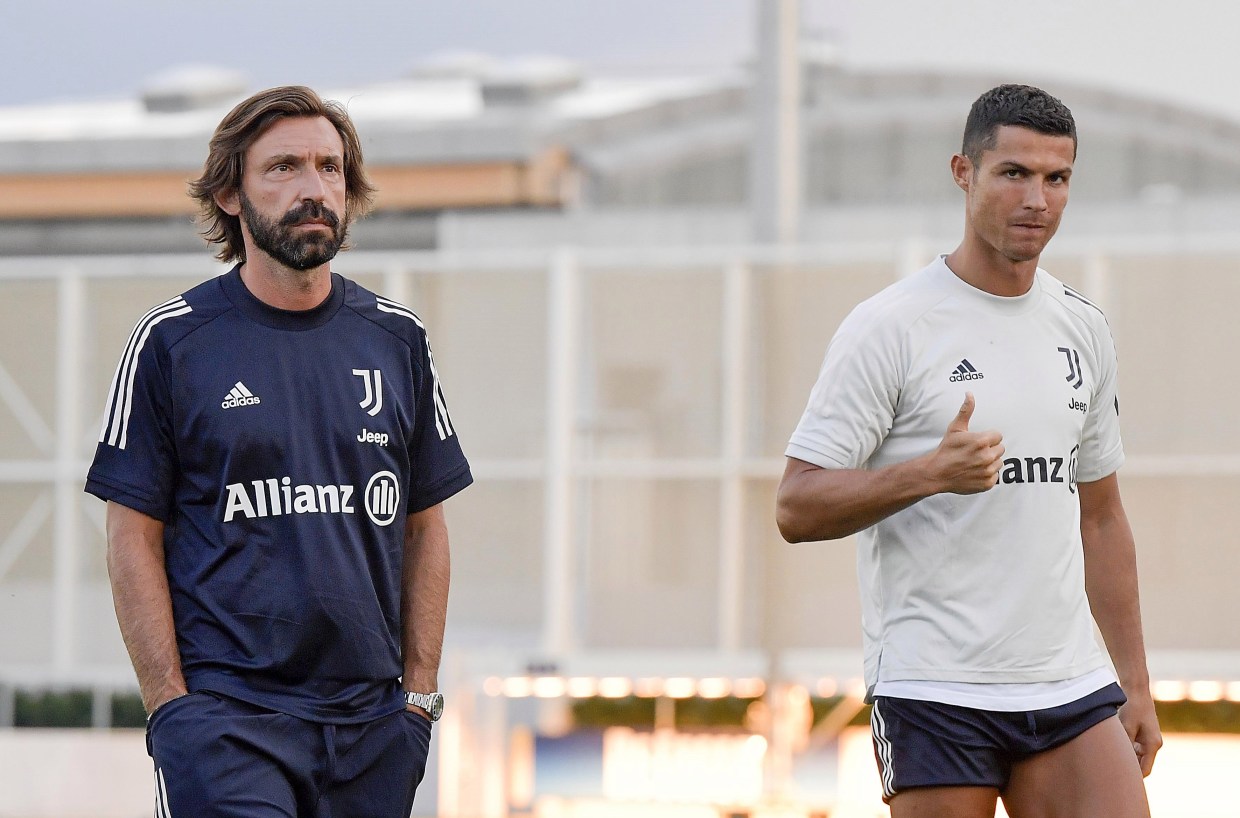 Reports coming out Pirlo has convinced Cristiano to stay by the way.

Page 1 of 19
Permissions in this forum:
You cannot reply to topics in this forum
Latest topics
» The Official Dwayne Wade <<<<<< you thread