Someone on the main said Pepe isn't suited on the wing. So where is he best suited?

Pepe is someone you want cutting in, driving at the box, getting shots away and maybe looking for killer passes. His role at Lille was essentially that, with the caveat that Lille were a counter-attacking team and played Pepe into space a lot more than Arsenal do.

For him to play his best role for us, he needs the right full-back to be going up and making space for him to cut inside, or Arsenal need to become a full on counter-attacking team. But as we've established, none of Bellerin, AMN or Cedric can consistently provide good attacking threat going forward to justify them being so offensive all the time and potentially destabilising the team.

Under Arteta, he's been played as a right and left winger, tasked with beating his man and crossing/providing cut-backs, since that's what the system demands. He's more than capable of winning 1v1 duels, but his decision making is slower. He prefers to beat players multiple times before deciding to put the ball into the box, by which point the chance has gone. He also likes to take shots from poor positions, sometimes scoring spectacular goals, but mostly just wasting the ball.

There's ability there, but he's really not a good fit for Arsenal want to do. Even at Lille, a lot of goals of his were penalties and long shots. He never struck me as a player who would reliably grab you 15 goals a season. Nor did he have amazing creative output. What's more, he's not a work horse and sometimes shirks his defensive duties.

In short, Arsenal spunked too much money on the wrong player and should probably move on in the summer. It says something when three managers now have preferred teenagers over him.

Imagine spending those 72m on Grealish instead

One of the worst games of football i've seen

The kids are alright. Subs made a huge difference.

Onto the next round

Gunnerblog said it the best : "In this team, the kids feel like the grown-ups". I don't know if Pepe will ever work out with Arsenal, it would be a year and a half already and all his flaws are still there while his strengths got regressed or underutilized.

Yea the fact we had to rely on Saka and ESR says it all.

I am really concerned about Aubameyang. I hope that goal gives him confidence but he looks so bad. Slow, disinterested and scarily....past it.

Pepe? it's always the same. You see him play and you think that "it's definitely coming. One game or moment which will unlock him" but that moment never comes. He may have the ability but his footballing brain is really poor. Indecisive. It's natural for someone around 17-22 making those kind of bad decisions. I mean ESR, Saka and Martinelli do it from time to time. But someone like Pepe? if he is doing this at the age of 25 then he is never going to make it far.

Not sure what we do with him. Give him another season i guess but he is a sub player for now.

@RealGunner wrote:One of the worst games of football i've seen

I dunno, that Barcelona game where we literally could not touch the ball was more excruciating

Surely this is the death knell for Willian? I cannot see what he brings to the table and is repeatedly being embarrassed by the youth. Saw an article somewhere online that highlights he' stands to make £30 million on this three year contract. £30 million, yet can't hit the target for 5 yards out. WTAF

Yea let's hope we sell him this summer for anything. We should have never let Mkhitaryan go in hindsight.

I think I've seen enough games of Nelson and Willock to say neither are going to make it at Arsenal.

Nelson is not sharp enough to be a final third player.

Willock, I don't understand why he starts ahead of AMN who is a far better athlete and ball player.

I am starting to like Pablo Mari who I initially thought was a complete waste of a transfer but has looked solid in defense.

Tierney had another amazing game. The difference in attacking down the left vs right was astonishing. But he looked rather dead at the end of the game. Deserves a rest.

At least Artetta finally got rid of Saliba. He obviously was not good enough since it took him 2 games to get MOTM.

Got southampton away in the next round of FA cup followed by Wolves away if we win.

tough back to back no doubt. A lot will depend on our squad management and fitness levels when we play those games. But never say never when it comes to Arsenal and the FA Cup

I want my 2 hours back

Roy triple man marked ESR and we were stopped

Xhaka was immense today, it's just so weird to assess our midfield rn. All we know is we lack creativity but even with Partey back, I don't know which combo would be the best to support ESR.

Xhaka and Partey for teams playing with a deep block
Ceballos is lol and he isn't a goal/assist threat to save his life but his quickness and sharp feet are better against teams that press us. Elneny remains an option too.

Needless to say WHY THE HELL HAVEN'T WE SIGNED ANYONE YET. Every fucking window i hear we already have our plans for the window laid out and then we go sign some washed up guy or some nineteen year old who will never see first team football. 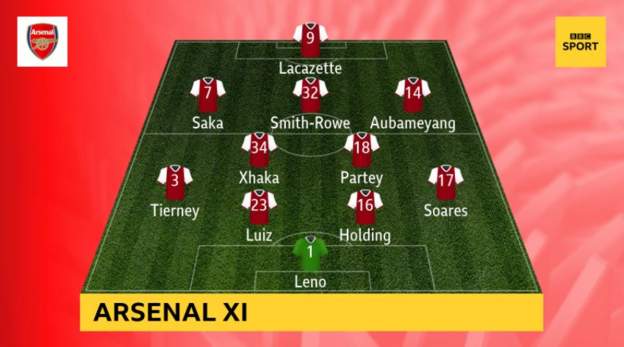 Nope. But Saka is playing on the right, not Auba

First half over and it looks like we should be able to achieve a draw again.

Page 19 of 20
Permissions in this forum:
You cannot reply to topics in this forum
Latest topics
» Does Zidane have a problem with playing kids?

Today at 12:13 am by BarrileteCosmico

Today at 12:07 am by BarrileteCosmico

Today at 12:05 am by BarrileteCosmico

Yesterday at 3:30 pm by BarcaLearning