@rincon wrote:Roma is playing so passively. Missing the intensity of a team that is 1-0 down in a knockout match. Remembering their CL run with Di Francesco and comparing it to this is bleak.

They controlled the match, very calmly, for 20 minutes and then Sevilla hit them on their first chance in a long time for 2-0 in a lightning counter.

Roma needs to wake up, play with purpose.

Only Zaniolo and Dzeko look to have the right attitude.

Folded like a deck of cards. They are intimidated by Sevilla's pedigree and the confidence that comes with it.

Much better second half by Roma. If they came out playing with this tempo from the start they could have won, but Sevilla already did their job for this match.

Sure seems like losing Alisson has been devastating for Roma, seems like they have a whole handful of pathetically failing keepers now

The keeper situation was a point of argument here before. Spending that much on Olsen and Pau after Alisson was just wasteful. Generally Monchi made a mess of Roma that they are trying to fix now.

their EL pedigree is what he means

Just looked up how many keepers they signed post Alisson and it's 3.
Noticed the transfer column on transfermarkt for the Monchi seasons are so long you have to scroll down for seconds

also really hope that loan system hs been reformed, has it? What some of these clubs are doing is just wrong.

Sabatini was a master at that. Roma always had to sell but he always had a solution lined up. This always destabilized Roma but he managed to build a great core with Kolarov, De Rossi, Strootman, Nainggolan, Dzeko, Florenzi, etc.

Kounde is one hell of a CB. So calm and the occasion does not faze him. He was amazing against Barca/Atleti/RM too

Teams can have Kounde for 70m. Diego Carlos going for 60m.

Been so long since Sevilla have had a strong CB pairing.

Reguilon is great too but he's not staying lol.

We had very little chance against them. They are the standard when it comes to this comp.

Well we can try again from Year Zero: Friedkin Edition. Just glad this season is finally over.

I was under the impression that offside only came in to play when a part of the body you can score with was offside . Olympiacos had a goal disallowed because the arm of one of the players who started the scoring move was offside in the build up. Have they done away with that interpretation of the law?

I thought that too

@Robespierre wrote:Aranguiz will miss next match against Inter

So it will be Julian Baumgartlinger then.

Add to that, a Bosz side. I expect you to beat them clearly.

However, I don't think AC Milan will be winning the CL this season.

Knocking out Inter in the semi-final and Juve in the final....

So , strenght and weakness?
I suppose they play good football but not solid defensively ? It's ok this banal analysis ?

A team that consists of
-  a chunk of immensely talented yet very immature kids (Diaby, Havertz, Wirtz, Tapsoba, Palacios, Paulinho who is injured), who are nowhere near the finished article yet probably already have one foot out of the door if they know what's good for them
- a few former top talents who forgot to leave to a better club (Wendell, Tah, Bailey, Yedvai), have stalled, and are now pushed to the bench by the above bunch
- a few players who are just very mediocre but get to start surprisingly often (Bellarabi, Volland, Demirbay, Weiser, Baumgartlinger, Alario)
- Aranguiz who is the poverty Arturo Vidal (who of course got his career start for a better Leverkusen), decent, suspended
- the Bender twins who have seen it all yet always have stayed distinctly, even if at times closely, below the treshold of world class
- and a Finnish striker who is not Pukki, enough said

it's just a team that will never go anywhere, too much mediocrity and too much immaturity in the mix

Here’s how we will start things off tonight! #InterB04 #UEL pic.twitter.com/QO1ad8CnUh 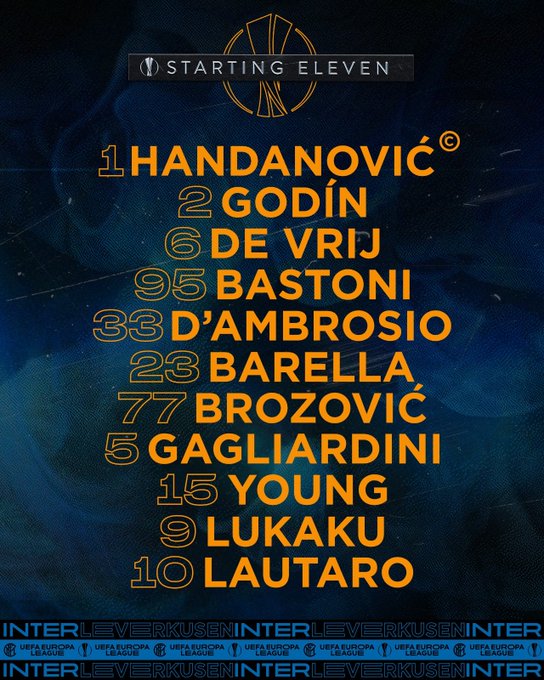 I called Volland mediocre, might have just as well called him dog shit

Today at 4:57 am by BarrileteCosmico