RealGunner wrote:Cavill might cost a lot more but he is the future so preferably him. But game geralt is perfect too.

I imagine it's just capitalising on success tbh. Wouldn't be surprised if we see more stuff built on the franchise if the live action series continues to be popular.

The success of it has been pretty insane, Witcher 3 had more concurrent players after the show than it did at launch.

Pretty sure i read more books have been published too. 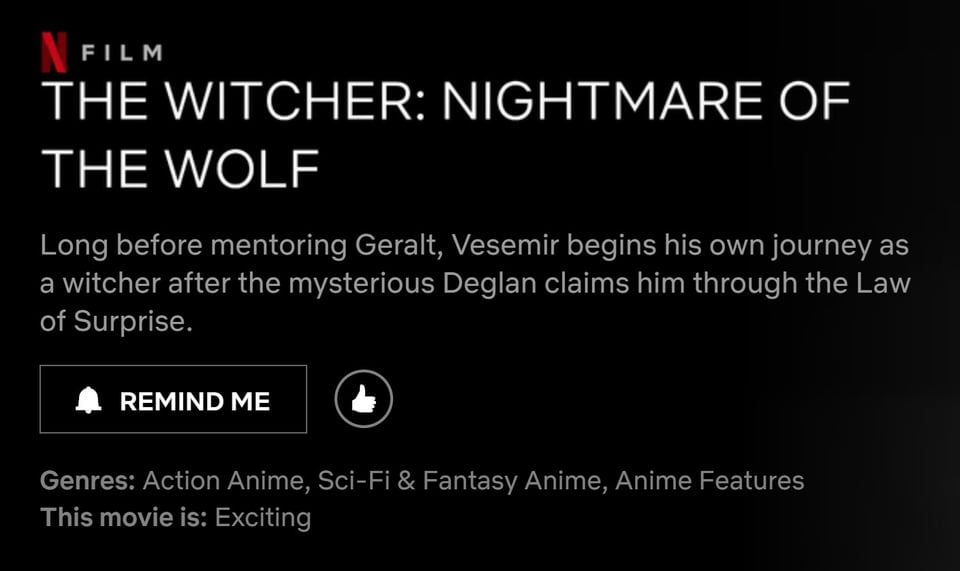 So it's about Vesemir? That's interesting.

Is Hamill voicing him?

Kim Bodnia as Vesemir is official. Danish actor so that's nice given I watch them plus I always wanted Mads Mikkelsen as Geralt.

Hamill would have been a good novelty choice but is a better voice actor than he is an actor and isn't exactly fit so may be a good choice.

It was never that likely imo.

Kid Bodnia is great. Like this much more than when Jon Stewart cast him as a Persian guy

Yeah, Hamill became too much of a meme. The show would be shit if twitter/reddit picked the cast. Would rather trust those who actually work on the show and are present at the auditions and table reads.

Watched the first 3 episodes. 1st encouraging, 2nd was outstanding, this one sold me on the series. 3rd wasnt as good as 2, but great still.

It was really cool to see opening for the game play out in episode 3. Foltest, Adda, Triss, and the Striga curse breaking. They did it all very similarly and really well.

The backstory with Yennefer, a character I havent met yet in the games, only heard about her, was the highlight so far in terms of plot.

We should go back to casting announcements and ban everyone who complain about yennefer. I'm sure people remember what episode is this

Speaking of dogs, Danish actor Kim Bodnia will be starring as Vesemir in season 2 of The Witcher series. I don’t know if this has already been mentioned. I haven’t seen him in anything since the Danish movie «i Kina spiser de hund» (in China they eat dogs) which is a pretty old movie at this point, but I think he’ll be good for the role.

He’s been in a few Norwegian productions as well as Scandinavian ones, but I haven’t watched any of the non-Danish ones. I bet Freeza’s more familiar with his more recent work.

Ive seen his work and he is definitely talented and more than enough to play Vesemir.

I was hoping for a bigger name similar to the surprise we got in Cavill but Ive little doubt he will immerse himself well into what is a nuanced Vesemir.

Yeah, I did kind of expect it to be Mark Hamill, but Bodnia is an interesting choice. My fellow Norwegian, Kristoffer Hivju has been cast as the character, Nivellen from the books, also. I believe I read that the internet had suggested him for the role of Vesemir, but somehow that didn’t quite make sense to me.

I'm glad it isn't Mark Hamill. There was too much hype around him, same as Mikkelsen or Waldau for Geralt. Reddit loves to do their own casting but it's just a cringefest.

Mads Mikkelsen is only understandable speaking Danish, and even then it's a struggle.

Bodnia is one of our greats and he can play both terrifying and incredibly soft and caring like no other actor we have.

He does a good job in Killing Eve (only show I watched him on), but they're very different characters so it's not much to go on

Bodnia is one of our greats and he can play both terrifying and incredibly soft and caring like no other actor we have.

Well, I did expect it to be Mark Hamill since he himself said he would do the role.

Being able to act terrifying, as well as soft and caring sounds like a good description of Mads Mikkelsen, as well

I wasn’t a big fan of what little I saw of Hannibal, but it’s absolutely praiseworthy how much emotion and intent Mads is able to display through his expressions and body language. I can’t agree that I’m not a fan of his English work. He’s an excellent actor.

I watched glimpses of his role as a soft family dad in a Danish movie, a long time ago. I was just browsing through the channels, so I don’t remember the name of the movie. I do remember that it felt odd to see him in such a different role, but at the same time, he seemed to fit right in. It was a bit similar to watching Jim Carrey in Eternal Sunshine of a Spotless Mind.


I think you're being a little too harsh on him. I think he speaks perfect English.

It's been a while since I last saw him on my screen, but I don't think I have ever had any trouble understanding him even though English is my third language.

The Demon of Carthage wrote:


I think you're being a little too harsh on him. I think he speaks perfect English.

It's been a while since I last saw him on my screen, but I don't think I have ever had any trouble understanding him even though English is my third language.

I'm not really being harsh. He's widely considered one of the best Danish actors of all time together with Trine Dyrholm, Jesper Christensen and Lars Mikkelsen. At least that's the mainstream consensus.

He's very well-known in Denmark for mumbling a lot, kind of like the Danish Tom Hardy. But my problem with his English roles isn't his ability. It's the roles themselves, he's not best in the kind of roles he's often given. He's often cast as a villain and tough guy, but he really shines when he's able to play a flaw and fragile man either seriously or in a comedy. And when he's supposed to be a criminal of some kind, it's much better when he's kind of a petty criminal. But I think he's too old for that now.

He's got some all time great work behind him in Danish film in case any of you are interested:

Jagten/The Hunt (2012) – Probably the most well-known Danish film on internet communities I'd say. The best performance he's ever given and rightfully won best actor at Cannes. Masterpiece through and through.

Rejseholdet (2000-2004) – Second most popular Danish TV show I'd say. After Matador. It's a detective procedural.

Then there's the Comedies with Anders Thomas Jensen. All sort of in the same unique absurd Danish comedy genre. These are also the most popular mainstream Danish films of the century. And it's not really close.

If you watch some of these films it'll become painfully obvious how he's not being used to his full ability in English-language works. Which is why in not as big a fan of him doing that work.

You got me really curious now to see how good he really is in Danish films. I have always thought he's an incredible actor watching his English movies, but if you think he's even better in his mother tongue, then I'll check it out.

I'll begin with The Hunt.

Well it's always hard to judge if you don't know both languages, which is why I often refrain from judging the acting in films in a language of which I have no knowledge. But I think it's obvious for everyone in this case.

Please get back to me about The Hunt. Preferably in the movie thread, so I don't derail this thread any more than I've already done

Not surprised on the part where Mikkelsen is hard to understand as Norwegians and Swedes sometime say Danes "have potatoes in their mouths".

Denmark and all things involved in it has been a huge part of my life in the last 3 years including Dansk and the moment I speak my learned Dansk and to English I do tend to mumble in the latter after being primed from speaking Dansk. Might just be me I don't know.

We have a lot of dialects in Scandinavia. I’ve met danes I’ve understood perfectly well, and I’ve met danes who sounded like they were swallowing words, moreso than pronouncing them. There are Norwegian dialects that I find harder to understand than most Swedish dialects, and it can become a bit confusing sometimes.

I keep reading and hearing from non-Norwegians that Ole has such a distinctive, Norwegian accent when he speaks English, but I’ve never met a Norwegian who sounds quite like him. I don’t know if I’d be able to recognize that he’s Norwegian if I didn’t already know it. He has a distinctive accent, both when speaking Norwegian and English - I believe the latter is particularly distinctive to him.

Dialects are interesting, but sometimes they just cause confusion. And we have so many of them here that I sometimes don’t even recognize if they’re from the northern, western, central, southern or eastern part of the country.

The first time I heard Danish and Dutch I was legit scared.

It's funny how rough they are in contrast with Swedish and Norwegian.

I love Swedish particularly, this interview almost inspired me to learn it but I never did cause i'm a lazy ass

1200 years before Geralt of Rivia, the worlds of monsters, men and elves merged into one, and the first Witcher came to be.

Yesterday at 5:01 pm by Myesyats

Yesterday at 10:14 am by Robespierre

Yesterday at 9:54 am by Myesyats

Yesterday at 8:35 am by rincon