@Myesyats wrote:El chiringuito say Ramos is 100% leaving in the summer. So both him and Varane leaving in one window? impossibru

chiringuito are hardly reliable. Truth is, not a single journalist can tell you with confidence that Ramos is not staying because they don’t know.

@Great Leader Sprucenuce wrote:Madrid finally realized which i told you all in like 2013.


Please take into consideration Mole has not watched football proper in like 5 years far less for Madrid games.

Also, I really find it's getting increasingly worrying that we are forgetting how much of a calamity Ramos was for a good portion of his career as a CB (and RB as well) and how much Varane covered for him.

The shoe is clearly on the other foot now but it was not always the case.

5 years is generous at this point lol.

Incredible that in a span of 2 days Upamecano and Kounde who many saw to replace had shitty nights in UCL. Furthers my point that there's literally no one that can replace 1 of our starting CBs, and we have to potentially replace both

Lol at the Varane hype

He is one of the weakest defenders I've ever seen. Will get bullied by every striker in the PL.

so it seems like Madrid are open to letting him leave, he wants to leave and United are the only team really interested? I've always had mixed thoughts on him when I saw him play, has to be an improvement on Lindelof and Bailly at least

any chance we can send a player to Madrid to offset some cost? Martial? Bailly? doubt it huh, wonder how much he will go for

Past his best honestly.

I think he's a decent defender with so many flaws, but can be successful if put in the right system and partnered with the right CB. He's definitely more of a complementary player than anything else, and shouldn't be trusted to lead the heart of the defense.

I don't think he's built for the PL, but maybe United have thought this through and have a plan for him. We'll see.

Wish him all the best though. Would rather we sell him this summer than keep him and lose him for free next year. 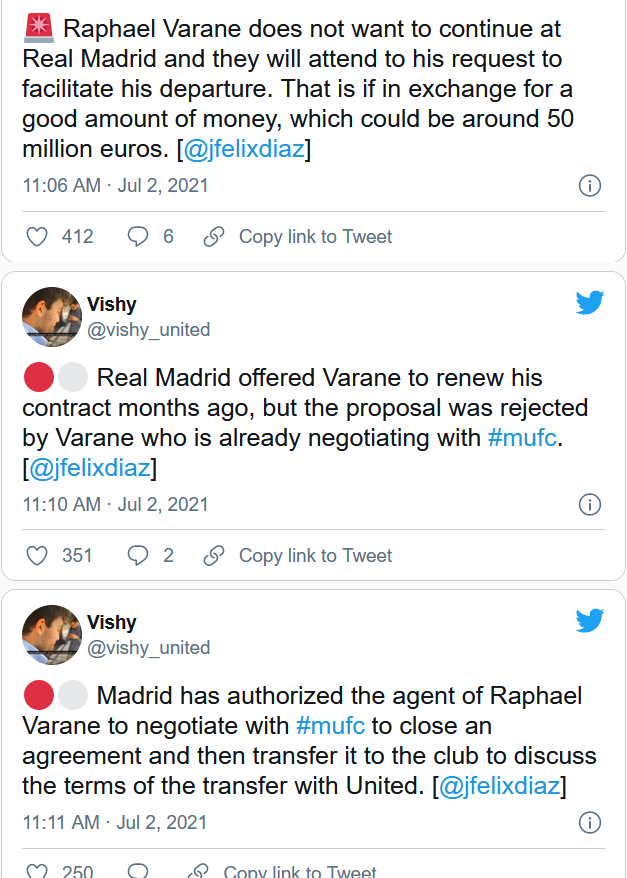 Can anyone tell me why Real are letting Varane go?

@Arquitecto wrote:Can anyone tell me why Real are letting Varane go?

Has lost motivation, isn’t the same defender he used to be, wants a big salary when RM are cutting down and rejected their pervious contract offer and final year of contract.

@Arquitecto wrote:Can anyone tell me why Real are letting Varane go?


1. Since 2019 Varane has wanted to explore something else. It was never clear that he wanted to go, I’m sure he was split but this situation is also driven by the player wanting something different
2. There have been contract negotiations all along but the club never wanted to pay him at the level of Ramos or now Alaba that they signed for free.
3. There is a feeling with Madrid that he is not the same since that CL game vs City without Ramos. And with the rise of Militao, it may be a good opportunity to try something else.

the club will be happy to keep varane, but i think its varane himself who may be looking for another challenge. and with talks that have been ongoing, the thought process is probably to avoid him leaving on a free next summer. fantastic defender top professional, he's been here for like 8/9 years i think. wish him the best, except against us

Thank you gentlemen, that explains it.

Anyone seeing him do well in United?

I see him as a tremendous success.

At least we have enough respect for our players to let them leave when they want to and don't force them to stay against their will. Has Lewa been let out of his shackles yet or is he still in the glorified prison that is Bayern Munich?

Can't wait to get Kimmich on a free next season

@Arquitecto wrote:Thank you gentlemen, that explains it.

Anyone seeing him do well in United?

I see him as a tremendous success.

I am not sure. On one hand, maybe a new challenge will help him and he has the quickness to bottle up the most dangerous forwards the PL have spread across the top 6 of the league.

But on the other hand, he hasnt looked the same in a long while now and I can see him making more errors against those average teams who constantly make it an aerial and physical duel so quickly in ball possession.

If he was awful, I wouldnt be the least bit surprised. Despite his huge talent.

I think he'll do better than at Madrid.  The reason is consistent responsibility and a predictable CB partner.

As great as Ramos is, let's not pretend like he isn't one of the worse positional CBs you've ever seen.  When Varane was younger and had uber speed, he could handle it.  Now, he can't.  So having someone next to him that's predictable (mostly) will help him a lot.  Kimpembe is mini-Ramos (he's positionally very suspect), which didn't work either.  Pavard getting smoked all the time on the other side was stressful too lol.

In terms of leadership, he'll have a similar role to France, which suits him better.  Namely, he's won't be the leader of the team...  but definitely the defensive leader.   He does well in this circumstance because he can quietly hold people accountable.  Couldn't do that at Madrid with Ramos, Marcelo and Carvajal.

We'll see...  but i think the change is necessary.  He's not the same. He needs to go to a place where he can carve out his place without luggage.

Puting leadership and Varane in the same sentence

lol sportsczy, i dont think we've heard from you since France's unceremonious exit. welcome back

Done dealio according to reports

Imagine a backline of Lindelöf and Varane

Troy Deeny will have a field day

Maguire - Varane is the best CB pairing in the world