How is it different? Madrid lost the league in January this year and October the year before last. You can't possibly say with a straight face that we made Barcelona suffer the last couple years to win the league.

It has been as easy for Barcelona to win the league as it has been for Juve.

I'm not saying that Ronaldo should be credited for the win because I think Juve would've won it regardless. But to go as far as to claim that Juve is as trophyless as Madrid this season is simply factually incorrect and you would have to have a high level of saltiness to say that.

What we should do is acknowledge that fact that we royally fucked up with our transfer policy and hope that the board has learned their lesson and will go back to operating like an elite club again. Shitting on a former legend of this club, a player who gave his best years for us and was a major contributor to our success, is very low and won't do us any good.

@The Madrid One wrote:Lol, Serie A, Bundesliga, and Ligue 1 are all farmer leagues Demon. I understand your frustration but Ronaldo can't even wipe his ass with the Serie A trophy, what he cares is about Balon D Or and he def aint winning the next one. He's dead to me, move on. La Liga at least has the two biggest clubs in the world hypothetically battling it out every season, it's different.

He became the first player in history to win the league in 3 different countries. I wouldn't wipe my ass with that, to be honest

He looked genuinely happy to win the league, from what I could tell. I'm sure he'd prefer to win the CL, and we can berate other leagues as much as we want, but he added another, brand new trophy to his cabinet, and another milestone to his legacy as a professional. That's not insignificant.

Look, I don't care whether he wins or loses with a different club, but objectively speaking, winning a trophy is an achievement, and I'm willing to bet that he doesn't lose sleep over some guys on GL legacy thinking he put in the effort for nothing. We also keep saying that the copa is pointless, but I sure as hell would've preferred if we had won it this season.

It may only be one more Serie A trophy for the players who are used to winning it, but it's a brand new trophy for Ronaldo, so I have absolutely no clue why some like to argue that it's without value. Juventus have a weaker team now than they had in the past, and I'm sure he's satisfied with his own contributions towards keeping their momentum going in the league. He's been a difference-maker on several occasions when they've been exposed for their lack of quality. Have we stooped so low that we need to discredit his achievements and/or other leagues to justify our own shortcomings in La Liga?

At least, PSG have quality players across the board. Bayern are only 1 point ahead of Dortmund despite having looked like the inferior team for much of this season. Juventus.. they have Ronaldo, inconsistent Dybala and Pjanic who's not being utilized to his strengths.

As a Madrid fan, it is not in my agenda to sulk over CR7 winning a BPL (wrote "donkey l3ague", it's amusing that the system changed that to "BPL"), to each his own. I'm sure CR7 jacks off in the mirror as he recites "i won 3 leagues in 3 different countries" while "Sussudio" plays in the background, and that's what he'll prob be doing during the 2019 Balon D Or Gala.

At least, we have a proper Ballon D'or winner, right? Proper achievement, check. Won't win anything this season, but - Plays in the GOAT league, check.

Should there be a trophy of higher value than the Serie A, Ligue 1 and Bundesliga ones for achieving a convincing third place in über La Liga?

Neymar and Cavani literally have played 1 game between them since February, Rabiot never played, Verratti has played 2/3 a season, Bernat and Kehrer are the starting fullbacks, Alves and Marquinhos converted to CM because they had no choice (marquinhos was our for a month too during this time)....

The typical starting 11 has been since Jan

i don't know what the argument is here, but i can help reach a conclusion. the fact we are posting in a thread called "meaningless la liga" thread, that was opened in early march, when the season ends in may, and the official football season ends in june. like think about that for a second. this thread was made because the remaining 11 games since our barca loss are basically scrimmages, we can't put sugar on it, that's what these last games are

as an aside i think its high time we host the copa del rey final, and make the players show up to the stadium to watch.

Barcelona vs Valencia is definitely a CDR final worth hosting as to remind the players that this shit season is all your fault. Valencia, ugh and Barcelona, double ugh.
_________________ 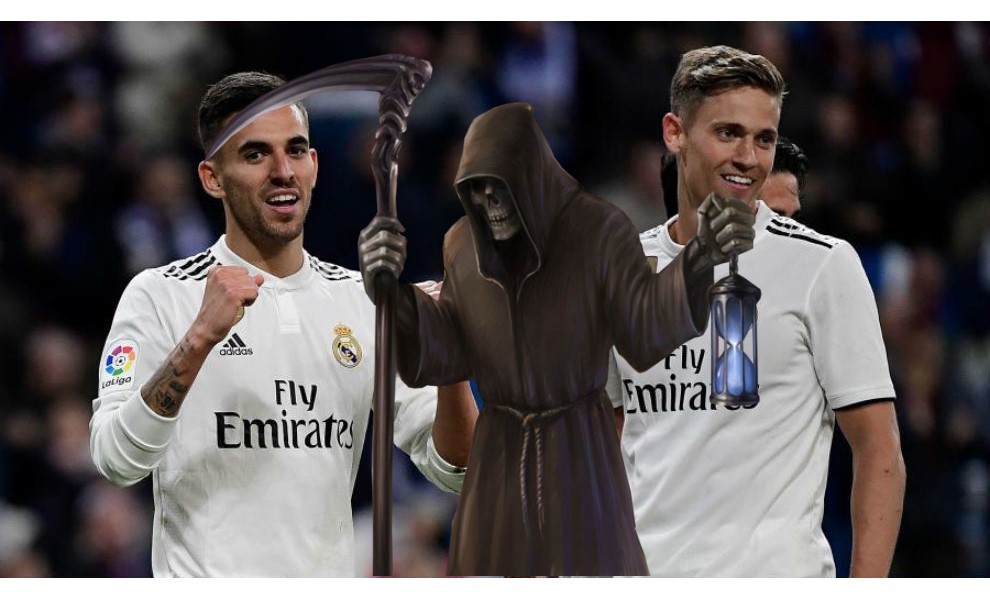 So apparently Llorente and Ceballos got into some heated arguments with Zidane Jr after Sr left in the summer.
_________________

Valverde starts, i think Zidane's plan is to have Llorente and Ceballos watch at home so they learn how it's really done.

Good defending. Not much in the attacking department though. Brahimi too isolated on the right. Valverde needs to get up and help him. Bale is just kick and run, jeez Vinicious save us ffs
_________________

Valverde is definitely showing Llorente lol. Poor fella, not having the best of matches but it happens. Hopefully Zizou doesn't hook him too early.
_________________

Isco has been absolutely appalling. unbelievable how non threatening we look with him trying to create

Probably the worst 45 minutes i've ever seen from Valverde. Inappropriate movements for a midfielder of his characteristics, he should be the organizer of the ball, but instead he's trying to make runs forward, appear in between lines, and thus disjointing the whole shape. He's actively making himself unavailable. Aside from this he has been speculative with his own technique. Fuck.

We just need the first goal. Getafe are playing for deadballs, if we score they'll be forced to come out of their shell and we'll hit them on the wings. Suarez will probably get red carded
_________________

@FennecFox7 wrote:Isco has been absolutely appalling. unbelievable how non threatening we look with him trying to create

Isco has been behind basically every single one of our good chances. Obviously not tip top shape but he is one of the last we should be looking at today
_________________

Much better half from Fede, but playing on the right side of the midfield limits him because of how he has to maneuver his body.

Asensio is terrible. So so so bad. The subs literally killed our momentum and suddenly Getafe started getting more and more chances
_________________

Diaz is a baller. Vini on one side and Diaz on the other

would lovs to see that for at least a game

Btw Navas just puts me at so much ease. Hope ZZ has balls and persists with him. If he really wants to put hia stamp on this team he needs to start with the dilemma in goal
_________________

@sportsczy wrote:Glad I missed this one lol. Wish I'd missed a few more...

Doesn't it feel good not to watch? I am completely turning a blind eye to this team until the summer.

Page 8 of 15
Permissions in this forum:
You cannot reply to topics in this forum
Latest topics
» UCL QF 2019/20 | Atalanta Vs PSG