Impressed with Inter, they were so good in the FH, they were bit slow to adapt to Vidal coming on and tired. Obviously too if they had better players in some positions they would have probably put the game beyond us already in the FH, and done more overall.

I imagine a good season for them, and Conte gets to spend even more money in the summer to make them even better next season?

Despite he's won also abroad, he still carries around prejudices . For example you can still read he's a negative coach etc
It's false.
His team so organized and he proposes always football

This was at Camp Nou.

@Robespierre wrote:Despite he's won also abroad, he still carries around prejudices . For example you can still read he's a negative coach etc
It's false.
His team so organized and he proposes always football

This was at Camp Nou.

Never played defensively with us either, always sought to control matches. Our more defensive closing of games came with Allegri. Yet you hear it about Conte simply because of how organized his team was.

Conte having one of those mood swings ...
after the last serie a game he said the following,

while club seems to support conte they are probably looking at alternatives if things go south w conte
https://www.football-italia.net/156721/mediaset-allegri-alternative-conte-inter

Mediaset is terrible source , but even Sky is insisting on it

I feel Conte will leave

He's such a diva lmao

yea - it would be quite spectacular if Conte calls day at Inter. Guy easily loses his cool ...
cant see him last another season even if he stays XD

Would be amazing if he quits Inter

Bigger boost for us than any transfer this summer.

11 million a year salary for few more years even for inter would be too heavy for them to handle ...
sorry robes but inter and u guys will have to keep w/ Conte's tantrum for a while while paying him handsomely

He said the same thing at Chelsea when we signed Morata, Drinkwater, Zappacosta et al. for him.

@rincon wrote:Would be amazing if he quits Inter

Bigger boost for us than any transfer this summer.


It means Paratici is crap

Still such a diva move. but I will watch where he goes with interest.

“I signed a 3 year contract with Inter and just as I've done my entire life, I'll work hard & give all the strength I possibly have to make this a winning project.” - Conte

^ if he says that now then why conte has to start all the circus from the get go lol,

following is what he said in sky italia,
ref: https://www.football-italia.net/156701/could-conte-quit-inter

“We have to grow and improve in all areas, including off the field, and a big club should protect its players more. We’ll discuss it all at the end of the season, I have to meet the President and he’s in China right now.

“It was very, very intense this year, difficult, and the lads did well to isolate ourselves and create unity within us, despite the difficulties. I don’t like people who get on the bandwagon and I saw a lot of that with Inter this year.

“We had to eat dung for months and got zero protection. My problem is that I have a vision, I see the path we have to take and I know what we need to do. I saw the other day an interview that Luciano Spalletti gave at Inter in 2017. We’re now in 2020 and nothing has changed.

“I can be a lightning rod for the first year, but if you don’t learn and keep making the same mistakes, then that's just crazy. I want to be absolutely clear that I am not talking about the transfer market or the players. I want that to be very clear.”

“Only I know what I had to do to get Romelu Lukaku! Only I know…”

maybe if he had this things going on in his mind he could have spoken to someone who he can talk to directly at the club or owners.
what he says is not a wrong thing to say but he could have kept this private instead of letting it all out now because all things are being assumed at this point from the outside.

i got the understanding from some podcasts i listen to that his issue has more to do w/ not being able to have a final say directly to owners right? is he indirectly hinting that he has some sort of problems or a big one w/ marotta ?
i still dont get it that if it is not regarding not getting players that he want to win something important than what is ... he talks about his vision at the club and what not ... 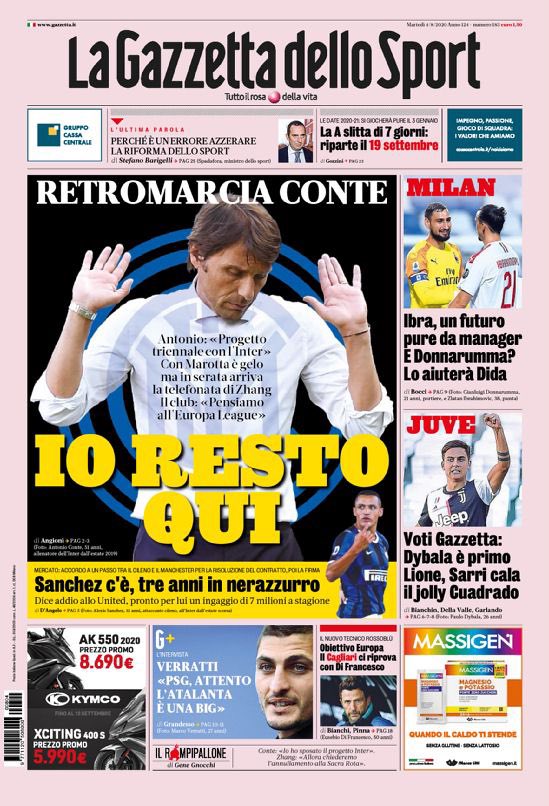 So if Conte indeed ends up having been outcoached by Numpetegui of all people in an European final, I think it would be only right of him to leave the Inter job as a form of managerial seppuku

Antonio Conte and Inter board are going to meet on next week. If he’ll decide to leave the club, Massimiliano Allegri is the favourite to join as new manager. @DiMarzio @SkySport #Inter #Conte

Allegri is going to do a better job than Conte, again.

Conte should just stay. Next season is his best chance at winning the league for Inter. Pirlo is coaching Juve and it seems like Juve is going through a bit of a rebuild themself.

If his qualms are with the transfer market what does he expect? You can't clean out an entire team in one summer. Even Pep's City rebuild took two summer transfer windows. Inter has supported him more than any manager in recent memory. He should give it another season, I'm sure they'll strengthen this window too.

If Conte is the best coach in the world when it comes to rebuilding teams in a quick manner, he might be the worst top coach when it comes to knockout football. In his entire football management career, he has only won one knockout competition which was the FA cup in 2018.

Obviously you have to judge his teams' performances relative to expectations. The CL exits against Bayern with Juventus, and Barca with Chelsea were expected. However, Juve and Inter both exiting from the group stages hurt his cred. He also failed to win any Copa Italia at Juve and got knocked out with Italy in the quarters at the Euros, although he did a much better job with Italy than anyone could have imagined considering the team he was fielding.

Come to think of it I'm not surprised he's never joined a super club. The guy is underwhelming in knockout football, he constantly beefs with the board, and he plays defensive football. Considering his demanding nature, I'm also not surprised top players don't want to play for him and why he's had trouble attracting them to his teams. Wasn't their reports of Ramos being against his signing? LOL.

I have a feeling he'll hop around from banter team to banter team, overperforming with them, beefing with the board, and then leaving for the next few years too. The only way that would change is if his teams make a deep CL run.

Di Marzio has gone from transfer oracle to Conte stalker?